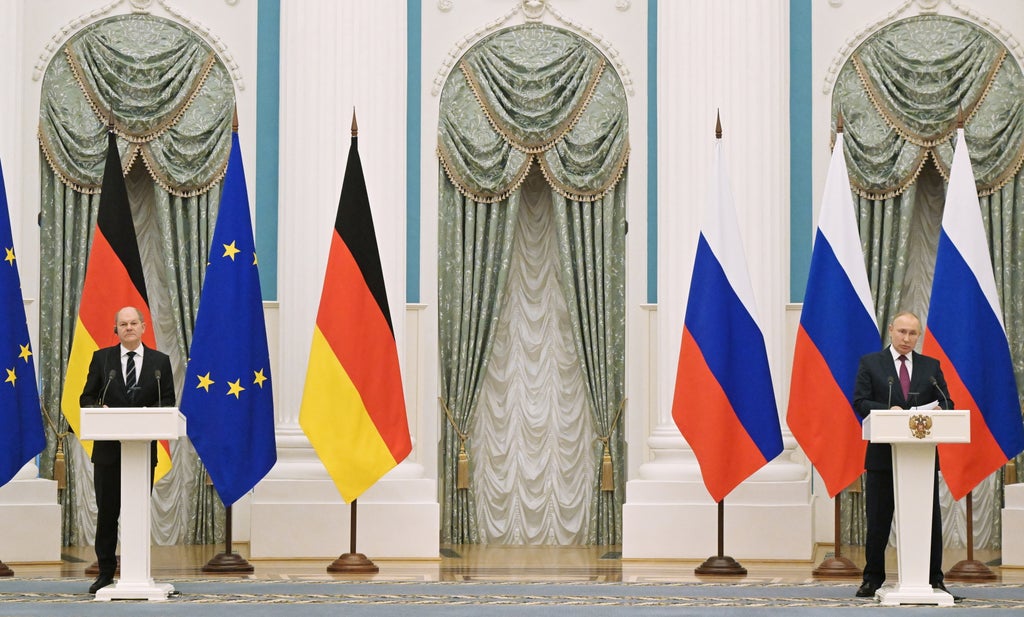 Russian president Vladimir Putin has said he does not want war in Europe and is willing to continue diplomatic discussions over the current tension over Ukraine.

But Mr Putin said that Nato had not delivered a “constructive” response to Russia’s security concerns and said that “everything possible” must be done to resolve a “genocide” which he claimed was being conducted against the large Russian minority in the Donbass region of Ukraine.

The Russian president was speaking alongside German chancellor Olaf Scholz just hours after the defense minstry in Moscow announced that troops were being partially withdrawn following exercises near the Ukrainian border.

The announcement of troops being pulled back was welcomed as a “good signal” by Mr Scholz, who added that he hopes that “more will follow.”

But there was no immediate confirmation from Western sources of withdrawal.

And Boris Johnson said that the latest intelligence on the situation on the ground is “not encouraging”, with evidence of army formations being brought closer to the border and field hospitals being built in Belarus.

The developments can only be “constructed as preparation for an invasion”, warned the prime minister following a meeting of the government’s Cobra emergency committee in London.

Mr Johnson described the signals coming out of Moscow as “mixed”. While there was a clear “avenue for diplomacy” opened up by positive comments from the Putin regime, Russia remained in a position where it could launch an invasion with a huge force “virtually at any moment”.

During a press conference with Mr Scholz lasting more than an hour in Moscow, Mr Putin was asked directly whether he could rule out war in Europe.

The Russian president replied: “Of course we don’t want it. This is exactly why we have put forward the proposal to start the negotiation process, where the result should be an agreement ensuring equal security for everyone, including our country.

“Unfortunately there was no constructive response to this proposal.”

Mr Putin said the US and Nato had rejected Moscow’s demands to rule out Nato membership for Ukraine, halt weapons deployments near Russian borders and roll back alliance forces from eastern Europe.

But he said Russia is ready to engage in talks on limiting the deployment of intermediate range missiles in Europe, transparency on military exercises and other confidence-building measures.

Mr Scholz said he agreed that diplomatic options are “far from exhausted” and called for further “de-escalation” of the situation by Russia.

The German chancellor tried to calm Russian anxieties about Ukraine and other former Soviet areas joining Nato, saying it would not happen within his or Putin’s time in power – though he made clear he was not ruling it out in the longer term.

“Nato expansion is not really on the agenda, not a topic that will come up while we are in office,” said Mr Scholz. “I think it could take longer – but not forever.”