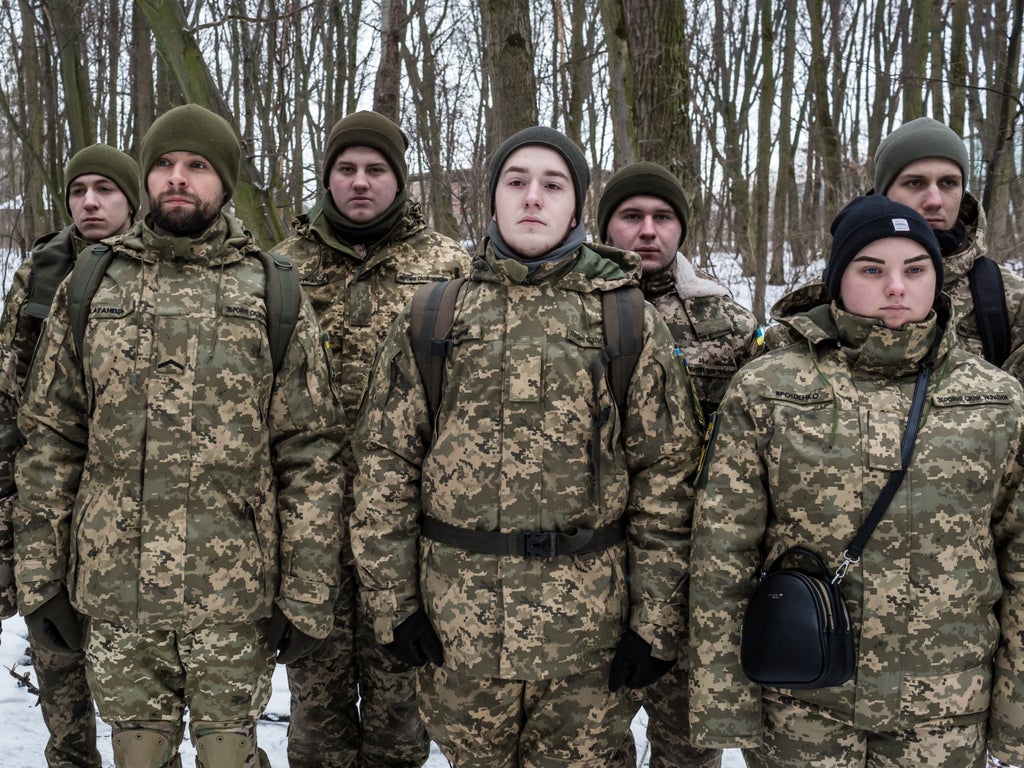 meEvery weekend for the past three years, reservists from Ukraine’s 130th Territorial Defense Battalion have gathered in forests and parks on the outskirts of Kiev to train for the worst: a possible full-scale invasion by Russia.

At times, this seemed like an unlikely prospect. That has suddenly changed with Moscow troops concentrated on the border and Ukrainians wondering what they will do (fight, flee, hide, adapt) if Russian forces cross.

Kiev Battalion 130 is one of many such units in Ukraine. In the event of an attack, the government plans to provide weapons. But for now, most members have gotten their own. Those without weapons train with wooden replicas.

washington post I met some of the approximately 500 battalion members during their recent exercises in military tactics and defense of strategic installations.

Bida is from the city of Luhansk in eastern Ukraine. In 2014, after Russia annexed Ukraine’s Crimean peninsula, Kremlin-backed insurgents seized parts of Luhansk and neighboring Donetsk regions.

They seized Bida, who was a pro-Ukrainian activist, and locked him in a cellar, where he was tortured, he says. Shortly after, he and his wife, Yulia, fled to Kiev. Seven months ago, the two had their first child, Simon.

Bida says that after her experiences in Luhansk and moving to Kiev, she had trouble sleeping. “I had no sense of security,” he says.

Two years ago, he met a member of 130 at a New Year’s party and decided to join. In the battalion, he says, he works with people who are ready to defend “their families, homes and cities.”

This restored his sense of well-being. “I have no difficulty sleeping,” says Bida, now a unit leader who oversees up to 12 fighters.

He trained as a graphic designer and for a long time was a committed pacifist.

“I thought that any conflict could be resolved by peaceful means,” he says. “But I don’t believe that anymore, not with Russia.”

Zhaglo, a market researcher, says the defense battalion is an opportunity “not to be left out.”

Like many of the volunteers, he participated in the country’s 2014 protests that toppled President Viktor Yanukovych and his government, seen as corrupt and pro-Russian. Yanukovych and several of his ministers later fled to Russia.

During the 2014 revolution, protesters built a tent city on Kiev’s central Maidan square with soup kitchens, first-aid points and even a chapel. They also organized themselves into self-defense units in case the officials tried to clear the square by force.

After Russia’s takeover of Crimea and the start of the war in eastern Ukraine, Zhaglo looked for a way to get involved.

“When the Russian aggression started, it was impossible to go out like we went to the Maidan, put on a helmet and come to the Maidan, right?” he says, remembering the ease with which he joined the protests.

Two years ago, a friend who had joined the battalion took her to one of their training exercises. “It happened by accident,” she says.

Zhaglo, who has two adult daughters with families of their own and a son who is still in school, says he thinks Russian President Vladimir Putin may decide not to launch an attack on Ukraine.

“The situation is changing every day,” she says. “Specialists are arriving, the world community is providing us with weapons, and anything is possible.”

“I think that now this help that Ukraine receives from all over the world will continue to play its role and Russia, perhaps, will not dare,” he adds.

Brezytskyi, a business consultant who helps companies improve their management methods, joined the territorial defense battalion three years ago after visiting the unit when members were practicing with weapons on one of the days designated for exercises with live ammunition.

“I realized that this is exactly what I need. I can be civil and earn money for my family, pay taxes, [and at the same time] volunteer in the army and gain military knowledge,” he says. “That was the day I mentally joined the territorial defense.”

The battalion also offered Brezytskyi a way not to feel left out.

“Before [joining]I couldn’t get rid of the feeling that I am not involved in Ukraine’s liberation war against Russia,” he says. “Now, throughout these three years, we have weekly trainings, we obtain new knowledge and know-how.”

“Hopefully [these] it will be useful, if Russia continues to escalate the events in Ukraine,” he says.

“Each fighter tries to equip himself with his own weapon, but it is not cheap and not everyone can afford it,” he adds.

“It is very difficult, of course. The priority is the health of parents, loved ones, his wife and children, their needs,” says Brezytskyi. “If there is a war, we will fight it with what we have.”