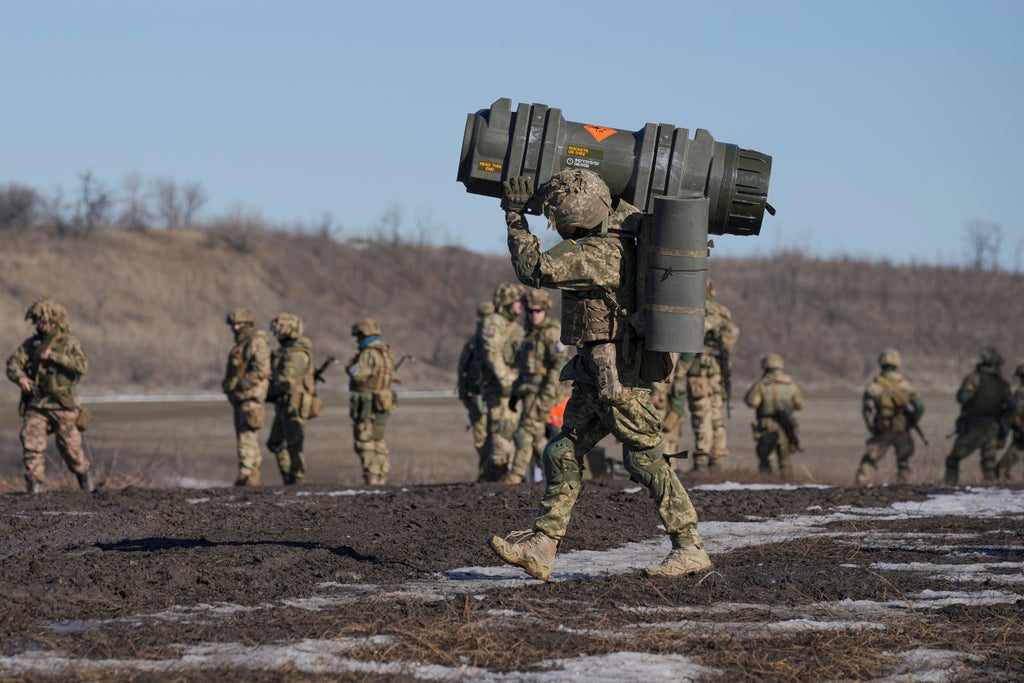 Russia made two overtures to ease tensions around Ukraine — reporting a pullback of troops near its neighbor and welcoming talks with the West. But the United States and its allies said they needed evidence of the troop movements and that the threat of a Russian invasion still loomed.

For the second day Tuesday, there were signs of hope that Europe might avoid war following weeks of escalating East-West tensions as Moscow massed around 150,000 troops on three sides of Ukraine and held massive military drills. Those moves led to dire warnings from Washington, London and other European capitals that Russia was preparing to roll into Ukraine.

But the tenor changed this week. President Vladimir Putin said Tuesday that Russia does not want war and would rely on negotiations in its efforts to eliminate any chance that Ukraine could one day join NATO — his key demand from him in the crisis. At the same time, he did not commit to a full pullback, saying Russia’s next moves in the standoff will depend on how the situation evolves.

Russia also offered few details of the pullback, and President Joe Biden said American officials had not verified Russia’s claim. He promised that the US would give diplomacy “every chance,” but he struck a skeptical tone about Moscow’s intentions.

“Two paths are still open,” Biden said in remarks at the White House. “But let there be no doubt: If Russia commits this breach by invading Ukraine, responsible nations around the world will not hesitate to respond. If we do not stand for freedom where it is at risk today, we’ll surely pay a steeper price tomorrow.”

Even amid the glimmers of hope, Biden said 150,000 Russian forces are now massed near Ukraine and in neighboring Belarus — an increase from an earlier US estimate of 130,000 troops.

Russia’s claim that it pulled back troops “would be good, but we have not yet verified that,” Biden said. “Indeed, our analysts indicate that they remain very much in a threatening position.”

Russia has denied having any invasion plans. It wants the West to keep Ukraine and other former Soviet nations out of NATO, halt weapons deployments near Russian borders and roll back forces from Eastern Europe.

The US and its allies have roundly rejected those demands, but they offered to engage in talks with Russia on ways to bolster security in Europe.

Speaking after meeting with German Chancellor Olaf Scholz, Putin said the West agreed to discuss a ban on missile deployment to Europe, restrictions on military drills and other confidence-building measures — issues that Moscow put on the table years ago.

He said Russia is open to discuss “some of those elements,” but added that it would do so only in combination “with the main issues that are of primary importance for us.”

While Scholz reiterated that NATO’s eastward expansion “is not on the agenda — everyone knows that very well,” Putin retorts that Moscow will not be assuaged by such assurances.

“They are telling us it won’t happen tomorrow,” Putin said. “Well, when will it happen? The day after tomorrow? What does it change for us in the historical perspective? Nothing.”

Scholz also said diplomatic options are “far from exhausted,” and he praised the announcement of a troop withdrawal as a “good signal,” adding: “We hope that more will follow.”

The Russian Defense Ministry released images of tanks and howitzers rolling onto railway platforms and more tanks rolling across snowy fields. It did not disclose where or when the images were taken, or where the vehicles were headed, other than “to places of permanent deployment.”

And NATO Secretary-General Jens Stoltenberg said that there have been no signs, so far, of a reduced military presence on Ukraine’s borders.

Meanwhile, a series of cyberattacks knocked out the websites of the Ukrainian army, the defense ministry and major banks. There was no indication that the relatively low-level denial-of-service attacks might be a smoke screen for more serious cyber mischief. White House press secretary Jen Psaki said the US has not yet determined who was behind the attacks.

Despite the worst East-West tensions in decades, few Russians expect a war. In a village in Russia’s Belgorod region, about 30 kilometers (18 miles) from Ukraine’s border, residents carried on with life as usual, even as more military personnel have been passing through village streets.

“We are really on the border, we really have relatives here and there, everyone has somebody” on the Ukrainian side, villager Lyudmila Nechvolod said. “No one wants war.”

Russian lawmakers urged Putin to recognize rebel-held areas in eastern Ukraine as independent states. The State Duma, Russia’s lower house, voted to submit an appeal to Putin to that effect.

Putin said the request reflects the Russian public’s sympathy for the suffering of people trapped in the conflict in eastern Ukraine that has killed over 14,000 since 2014. He noted, however, that Russia continues to believe a 2015 peace deal brokered by France and Germany should serve as the main vehicle for a settlement of the separatist conflict.