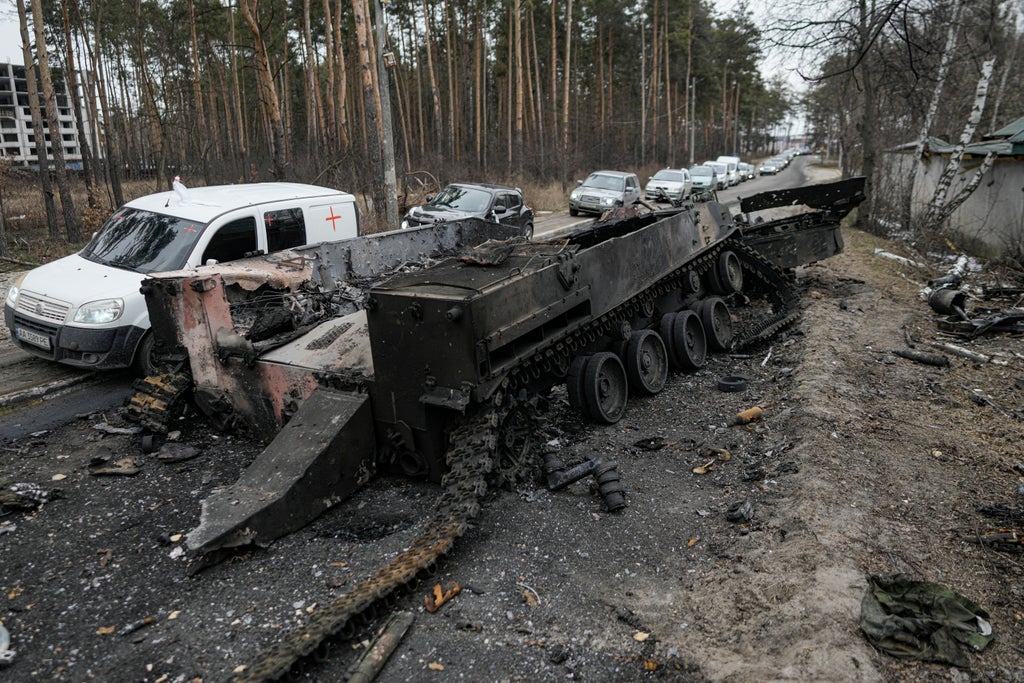 Putin spokesman refuses to rule out use of nuclear weapons

Russian troops bogged down and unable to make advances on the outskirts of Kyiv are facing “successful counter attacks” by Ukrainian forces and may even become encircled in the coming days, a British military intelligence update claims.

The Ministry of Defense said in an assessment published on Wednesday evening that Kyiv was “increasing pressure on Russian forces” north-east of the capital, and that Vladimir Putin’s battalions were now “facing considerable supply and morale issues”.

The intelligence note said: “Ukrainian forces are carrying out successful counter attacks against Russian positions in towns on the outskirts of the capital, and have probably retaken Makariv and Moschun.

“There is a realistic possibility that Ukrainian forces are now able to encircle Russian units in Bucha and Irpin.

“It is likely that successful counter attacks by Ukraine will disrupt the ability of Russian forces to reorganize and resume their own offensive towards Kyiv.”

The White House has put together a team of national security officials for charting out the US and its allies’ response if Russia uses the deadliest weapons it has — chemical, biological and nuclear — against Ukraine.

Known as the Tiger Team, the battery of national security officials are also preparing the US’s response if Russia attacks convoys in Nato territory carrying weapons and aid to Ukraine, reported New York Timesciting the officials present in the process.

All the contingencies being assessed by the team will be key to an upcoming Nato meeting today where leaders of all member states of the alliance will be present.

Between 7,000 and 15,000 Russian soldiers have been killed in four weeks of war in Ukraine, Nato said in fresh estimates released on Wednesday.

Russia started its invasion exactly a month ago on Wednesday and may have already lost as many soldiers as it did in the entire 10 years of the Soviet invasion of Afghanistan, the Nato estimate suggests.

The Nato estimate was based on information received from Ukrainian authorities, as well as whatever information Russia has shared — purposefully or not — and from intelligence inputs collected from open sources, an official from the alliance said, speaking on condition of anonymity.

Casualties on Ukraine’s end also remain unclear as the Zelensky administration has released little information about its own military losses.

No confirmed figure has been shared by the US and its allies monitoring the war.

Nearly two weeks ago, Mr Zelensky had said that about 1,300 Ukrainian servicemen had been killed in the war.

One of Ukraine’s best-known theater directors Oleksandr Kniga has been taken hostage “in a fascist manner” by Russian troops early on Wednesday, the country’s culture minister Oleksandr Tkachenko said.

Mr Kniga has been taken to an unknown location, the culture minister said on Facebook.

According to witnesses, nine Russian military vehicles pulled up to the director’s home and led him out.

They warned neighbors that if they stepped out of their homes they would be killed, the witnesses said. “The whole world should know about this!” Mr Tkachenko said.

He had also protested against the presence of Russian troops in Kherson.

Up to 40,000 Russian casualties in Ukraine, senior Nato official estimates

ICYMI: Earlier today, an unnamed Nato military officer estimated that Russia may have suffered as many as 40,000 casualties.

See here for more details about how this total was calculated:

US arms to be flown to Ukraine

ICYMI: The first shipment from a new, $800 million arms package for Ukraine that US President Joe Biden authorized last week will start flying out of the United States in the next day or so, and will not take long to reach Ukraine, a senior defense official said .

The official did not specify which systems would be included in the first shipments but said priority would be given to the kinds of defensive weapons already being used by Ukrainian troops.

“We are already aggregating stocks in the United States and we’re getting ready to ship them over there,” the official said.

After more than three weeks of constant Russian bombardment, it resembles “hell on earth”, according to some residents who were able to escape.

My colleague Tom Batchelor has this report:

A Russian journalist working for an independent news outlet was killed in shelling in Kyiv.

Oksana Baulina died in Russian rocket fire as she reported for The Insider in the capital’s Podilskyi District. A civilian was also killed in the incident, which saw two people with her wounded and hospitalized.

“The Insider expresses its deepest condolences to Oksana’s family and friends,” the outlet said in a statement.

“We will continue to cover the war in Ukraine, including such Russian war crimes as indiscriminate shelling of residential areas where civilians and journalists are killed.”

‘Shelves need to be filled’: The Ukrainians who are keeping the economy running

A delivery firm CEO, food production boss and wine store marketing director tell The Independent’s Bevan Hurley how they have transformed their businesses to aid the war effort.

The Ukrainians keeping the economy running

A delivery firm CEO, food production boss and wine store marketing director tell The Independent’s Bevan Hurley how they have transformed their businesses to aid the war effort

The United Kingdom will announce a “major new military support package” for Ukraine at Thursday’s NATO summit and the meeting of G7 leaders.

The support package will include 6,000 missiles, and £25m in financial support for the Ukrainian military, according to a Downing Street press release on Wednesday.

“This more than doubles the defensive lethal aid provided to date to more than 10,000 missiles, and comes on top of the £400 million (528 million $USD) the UK has committed in humanitarian and economic aid for the crisis,” the release stated .

President Volodymyr Zelensky has called for worldwide demonstrations in support of Ukraine as the Russian invasion hits the one-month mark.

“It breaks my heart, hearts of all Ukrainians and every free person on the planet,” he said in a Facebook video on Wednesday evening, and called for the demonstrations to start on Thursday.

“That’s why I asked you to stand against the war starting from 24 March, exactly one month after the Russian invasion. From this day and after that, show your standing, come from your offices, your homes, your schools and universities, come in the name of peace, come with Ukrainian symbols to support Ukraine,” he said.