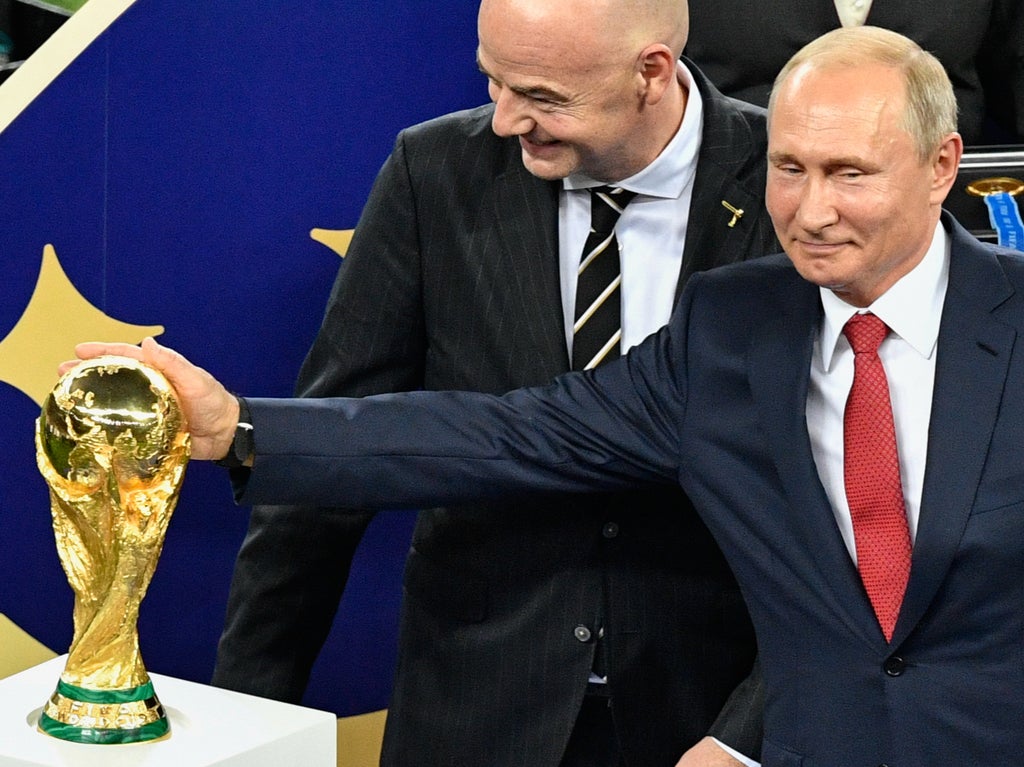 It was a situation the game hadn’t seen before, but led to a clarity that it has so badly lacked.

Mere minutes after Fifa had announced the ludicrous plan for Russia to compete in the World Cup play-offs without flags or symbols, their next opponents just cut right through that.

Poland’s federation chief Cezary Kulesza called it for what it was.

“In a situation of war in Ukraine,” he said, “we are not interested in engaging in a game of pretences.”

You couldn’t have a better description of what the world of elite football is. One possible effect of this disgraceful war, however, is that those claims are vaporised.

The situation is far too serious for anyone to have time for football’s self-justifying nonsense. How else to describe some of the scenes in the game over the last few days?

Fifa’s about-turn, in finally banishing Russia, said so much.

Before that, there was Roman Abramovich taking himself out of the game, at least in appearances. For years, the Chelsea owner’s legal team have used the law to suppress even speculation about his relationship with the Russian state and Vladimir Putin. The war prompted Labor MP Chris Bryant to explode all that and use parliamentary privilege to bring the subject into the open, calling for sanctions. The situation escalated to the extent that Abramovich stepped back from Chelsea, with a lot of speculation about what next. The club insist there is no cause to sanction him, and he has secured a series of legal apologies from media over claims of links to Putin.

That “non-political” pretext, however, has led to amazement within the game at claims that Abramovich is now in the position to try and broker peace talks with Ukraine and Russia.

Before that, there was the double-think required at Goodison Park. The uplifting heartfelt gestures by the players, staff and supporters of Everton and Manchester City were unfairly and unfortunately undercut by everything around them.

There were many advertisements for USM, a company which has as a director the club’s influential investor, Alisher Usmanov. He was similarly named in the House of Commons by Dame Margaret Hodge as someone the UK government should sanction. Manchester City were meanwhile draped in clothing promoting many of the business interests of the United Arab Emirates, the state in which their named owner, Sheikh Mansour, is a prominent Abu Dhabi royal.

Earlier that day, the same state – of which Abu Dhabi is by far the most powerful influence – took the widely-criticized decision to abstain at the United Nations Security Council, refusing to back the US resolution against Russia.

In another world, the UAE might face the same scrutiny. They have spent the last few years waging a war in Yemen that remains an even worse humanitarian disaster than Ukraine. Their primary allies are Saudi Arabia, who own Newcastle United.

We have another game of pretences there, of course, after the takeover was justified by the absurd idea that Saudi Arabia’s sovereign investment fund, the Public Investment Fund, is somehow a separate entity. Needless to say, no actual expert on the area gives this any credence.

You can apply similar logic to the residual notion that City are just the private indulgence of a wealthy royal. All of Mansour’s wealth is actually the wealth of an absolute monarchy, with no separation between them. The crown prince, Mohamed Bin Zayed, can appropriate little brother’s investment funds and has already done so once. Some of Bin Zayed’s most trusted inner circle, such as Khaldoon Mubarak and Simon Pearce, are in prominent positions at the club.

An increasing problem for the game is that everyone outside is now more attuned to such issues. It is provoking more questions.

It is supporting all the previous criticisms of “sportswashing” states. This war represents one huge reason why critical media raised these discussions in the first place. It is just wrong that clubs are touched by such issues. It is wrong that the warmth towards Oleksandr Zinchenko is complicated by such considerations. That is the reality that can no longer be avoided, though.

This is what clubs have been used for.

One of the reasons we don’t talk about the war in Yemen as much as Ukraine is because states like UAE have done such a good job of weaving themselves into the west. You only have to look at so many holidays to Dubai. Sportswashing is part of the same process, and smooths it.

This is also why it is so wrong to give competitions to states like China, Qatar and – of course – Russia. The idea that sport will help them improve is another pretense, a fantasy. It just helps their sportswashing aims.

We couldn’t escape reality forever. We are at the point the game couldn’t go past, where those realities had to impose themselves.

Football was just too greedy and self-satisfied to ever be concerned with such issues. The money was too big, the glamor was too big. That allowed the pretense to become too big.

It is possible we have reached a point where that is no longer sustainable, where the many problems of football’s infrastructure have been exposed. There’s a new, if floating, clarity.

This is what the responses of federations like Poland represent, that have basically forced Uefa and Fifa into action.

“People in football are so used to being able to totally control stuff that when they have to deal with a real-world problem they can’t control they are baffled,” says one senior Westminster source who has worked with the game. “They always try to come up with some ‘clever’ solution that is just totally unsustainable, and ends up making them look like they were dragged kicking and screaming.”

You could say similar about the attempt of some in football to just use the word “peace” in absolutely nothing statements about the invasion of Ukraine. It looked like they were more concerned with being seen to do the right thing rather than actually doing it; in pretense

FIFA’s initial statement on Russia was an example of this.

After radio silence for two days, the game’s federations came up with a bad response that almost everyone predicted, but it took mere minutes to fall apart. It says a lot that the about-turn took just another day.

It wasn’t quite “kicking and screaming”, to give Fifa and the federations their due, but it did shatter a few pretences.

The Independent has been told that a core of European countries – and particularly Poland, driven by Juventus legend Zbigniew Boniek – were central to this.

One common counterpoint has been over where the line should be drawn. Some within the game have argued that similar rationale should be applied to Saudi Arabia, UAE and Israel, as well as USA and Britain given the war in Iraq, with others insisting it could just lead to a precedent where everyone is constantly pointing fingers at everyone else.

These are actually healthy discussions to have, and a point football needs to get to is one where it can actually stage these conversations in an honest manner rather than constantly trying to pretend politics doesn’t interfere.

The last few days have shattered that notion. That is largely down to the sheer extremity of the Russian invasion, both in proximity and shock. It has driven a rare emotion, which has guided a logic that makes it a more immediate problem than everything else.

To go with the invasion, Putin has threatened the use of nuclear weapons, so the point is to sanction them to such a degree that the war is unsustainable among his own population. This would avoid more bloodshed, and sport is a powerful cultural weapon in that.

It was hugely influential with apartheid South Africa, which provides one prominent precedent.

For the moment, another side of this is that it has brought out a genuine goodness in people and the game, and an antidote to such cynicism. The uplifting episode around Benfica’s Roman Yaremchuk was a glorious illustration of humanity, at a time of so much death.

Rather than this energy only going as far as Russia, though, it should provoke these bigger debates. Football needs to accept it is intimately intertwined with politics, and judge everything on a case-by-case basis.

It needs to start seeing things clearly. It won’t happen of course. There’s always another form of money coming along. The cryptocurrency businesses and private equity firms are already circulating.

That is because the game’s safe little bubble has burst, though. The game of pretenses has been turned on its head.

If the first casualty of war is true, it sadly shows how much deception there is in football that it has taken a conflict to bring some clarity.