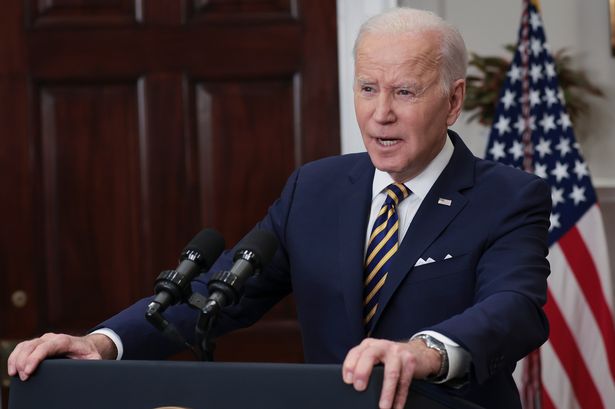 President Joe Biden and western allies have pledged new sanctions and humanitarian aid following the invasion of Ukraine – and warned of a ‘response in kind’ if Russia used chemical weapons.

Mr Biden also announced the US would welcome up to 100,000 Ukrainian refugees — though he said many probably prefer to stay closer to home — and provide an additional 1 billion dollars in food, medicine, water and other supplies. This came after the western leaders spent Thursday planning the next steps to counter Russia’s month-old invasion – and huddling over how they might respond should Mr Putin deploy chemical, biological or even a nuclear weapon.

They met in a trio of emergency summits that had them shuttling across Brussels for back-to-back-to-back meetings of Nato, G7 and the 27-member European Council. Mr Biden, in an early evening news conference after the meetings, warned that a chemical attack by Russia ‘would trigger a response in kind’.

“You’re asking whether Nato would cross. We’d make that decision at the time,” Mr Biden said. Boris Johnson also warned Russia around the use of chemical weapons – saying that, if the Russian president used chemical weapons, the consequences would be “catastrophic for him”.

However, a White House official said later that Mr Biden’s comments did not imply any shift in the US position against direct military action in Ukraine. Mr Biden and Nato allies, including the UK, have stressed that the US and Nato would not put troops on the ground in Ukraine.

Mr Zelensky, while thankful for the newly promised help, made clear to the western allies he needed far more than they are currently willing to give. “One percent of all your plans, one percent of all your tanks,” Mr Zelensky asked members of the Nato alliance. “We can’t just buy those. When we will have all this, it will give us, just like you, 100% security.”

Mr Biden said more aid was on its way. But the western leaders were treading carefully so as not to further escalate the conflict beyond the borders of Ukraine.

What do you make of the US President’s comments? Have your say below

“Nato has made a choice to support Ukraine in this war without going to war with Russia,” said French President Emmanuel Macron. “Therefore we have decided to intensify our ongoing work to prevent any escalation and to get organized in case there is an escalation .”

Poland and other eastern flank Nato countries are seeking clarity on how the US and European nations can assist in dealing with their growing concerns about Russian aggression as well as the refugee crisis. More than 3.5 million refugees have fled Ukraine in recent weeks, including more than 2 million to Poland.

Mr Biden is to visit Rzeszow, Poland, on Friday, where energy and refugee issues are expected to be at the center of talks with President Andrzej Duda. He will get a briefing on humanitarian aid efforts to assist fleeing refugees and he will meet with US troops from the 82nd Airborne Division who have been deployed in recent weeks to Bolster Nato’s eastern flank.

Billions of dollars of military hardware have already been provided to Ukraine. A US official, who requested anonymity to discuss internal deliberations, said western nations were discussing the possibility of providing anti-ship weapons amid concerns that Russia will launch amphibious assaults along the Black Sea coast.

Mr Biden said his top priority at Thursday’s meetings was to make certain that the West stayed on the same page in his response to Russian aggression against Ukraine. “The single most important thing is for us to stay unified,” he said.

Finland announced on Thursday it would send more military equipment to Ukraine, its second shipment in about three weeks. And Belgium announced it will add one billion euros to its defense budget in response to Russia’s invasion.

At the same time, Washington will expand its sanctions on Russia, targeting members of the country’s parliament along with defense contractors. The US said it will also work with other western nations to ensure gold reserves held by Russia’s central bank are subject to existing sanctions.