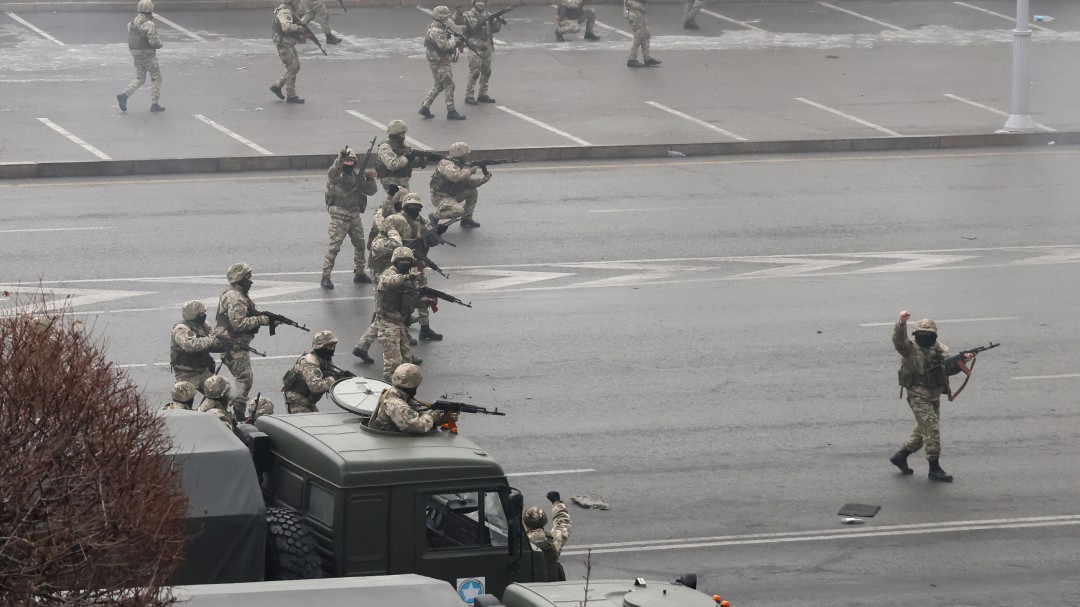 The demonstrations broke out in Kazakhstan on January 2 in response to the increase in the prices of liquefied gas, the main automotive fuel used in this Central Asian nation, led to riots on Tuesday and Wednesday, with the seizure of administrative headquarters and serious acts of vandalism. However, the rise in price has only been the culmination, since the population had long wanted to demonstrate their enormous dissatisfaction with the country’s government.

Faced with this situation, Russia and its allies from the Collective Security Treaty Organization (CSTO), an ex-Soviet military alliance, have begun the deployment of their troops in Kazakhstan to quell the unrest that is shaking the country, where the clashes between the Army and the Protesters have caused “dozens of deaths.”

“In accordance with the decision of the CSTO Collective Security Council approved on January 6, a peace contingent was sent to Kazakhstan for a limited period of time (…) in order to stabilize and normalize the situation”, reported by OTSC, cited by Interfax.

The main mission of these forces, according to this alliance, will be “the protection of important state and military objectives, support to the agents of the order of Kazakhstan to stabilize the situation and promote their return to the legal framework.” The first contingent to arrive in Kazakhstan was the Russian, made up of Airborne Troops units, which according to the CSTO, “already carry out their designated missions.”

Intense clashes in Almaty continued throughout the night, with “dozens” of protesters killed, according to the city’s police spokeswoman, Saltanat Azirbek, who referred to an “anti-terrorist operation” today. . “Dozens of attackers were killed. We established their identities,” he said, without specifying the exact number, said the police spokeswoman quoted by Interfaz-Kazakhstan.

The police representative indicated that groups of armed protesters tried to seize three administrative buildings, the Almaty Police Department, as well as several regional police units during the night, but that the forces of order prevented them.

According to local media, machine gun bursts are heard in the city and on social media users report that both the police and the military as well as the protesters are armed.

The state television channel Jabar 24 reported today, citing the Interior Ministry, that the “counterterrorism operation” is hampered “as terrorists use civilians, including women, for cover.”

“The entity ensures that law enforcement officers do everything possible to guarantee the safety of the population,” the channel said. In addition, Jabar 24 denounced that the armed protesters surrounded two hospitals in Almaty and prevented the passage of ambulances with patients requiring treatment and medical personnel.

The day before the authorities reported the death of at least ten uniformed men during the riots and the fighting to expel the protesters from the Almaty airport. The President of Kazakhstan, Kasim-Yomart Tokáyev on Wednesday night requested help from the CSTO to put an end to the massive riots, which he described as a “terrorist threat”.

The president noted that “terrorist gangs” had staged riots in several Kazakh cities, and particularly in Almaty, the country’s largest city, where protesters seized various government buildings, including the mayor’s office, the president’s residence and the airport.

See also  Amazon will open its first physical clothing store in Los Angeles: algorithms will suggest what to try on | Economy