Skip to content
Home News Rubén Gallo: “Speech in Havana is an injection of energy, of life” | Culture 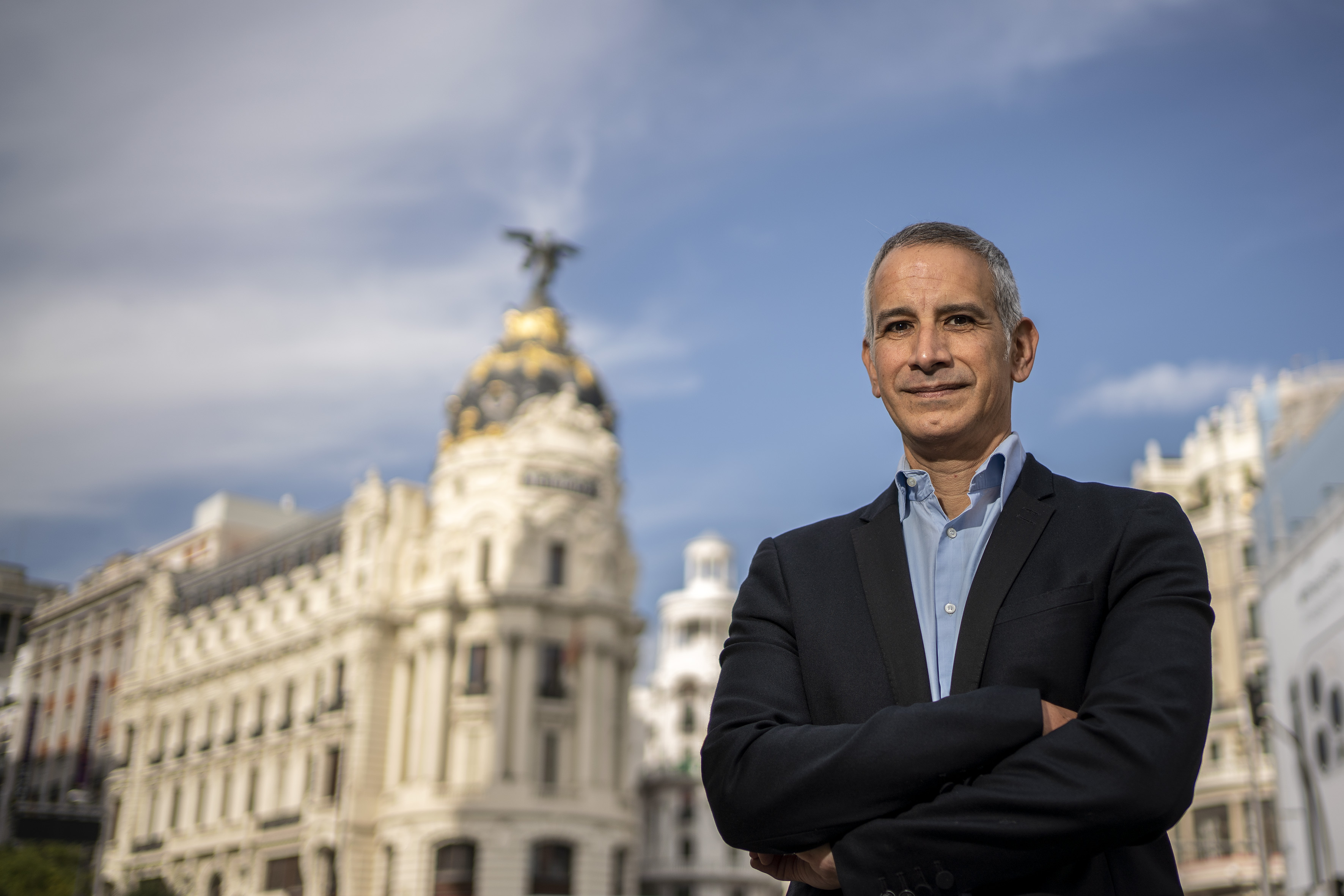 This man who always seems happy, even when he is upset, has been a professor at Princeton University (New Jersey) since 2002. There he has put order and enthusiasm to the teaching of Spanish-American literature, and for this he had, among others, the help by Mario Vargas Llosa, before the Peruvian was Nobel. In addition, Rubén Gallo (Guadalajara, Mexico, 1969) is also a novelist, capable of mixing with Havana’s Malecón, above all, to find there the material of his fictions, always related to reality. He is the author of Theory and practice of Havana (2017) and just published Death in Havana (editorial Vanilla Planifolia), recently presented in Madrid, where this interview was conducted on October 23. In those Havana books beats the Cuban sound as well as the tribute to authors that he has taught and admires, such as Guillermo Cabrera Infante, Fernando Vallejo or Vargas Llosa himself, about whose work he organized some dialogues with his students (Conversation at Princeton), published by Alfaguara. He is a mixture of accents, but from his rhythm it seems that he was educated on the same streets as Cabrera Infante or Celia Cruz. His passion for literature seems to be born.

Question. Where does this passion come from?

Answer. I came to Yale University at the age of 17, to study English letters. At that time he was not writing, but he saw the writers as the chosen ones. Many figures passed through Yale, and one day Octavio Paz came to give a lecture, the night before he was awarded the Nobel. In Mexico I could never approach a writer of that stature. It was a magical moment: in a room, in front of us, doing a poetry reading. He read with great naturalness. He was a man who projected a lot of goodness. At the end of the reading, some teachers wanted to take it away. He wanted to stay “with the young.” And we talked to him. That marked me, that idea of ​​literature as something alive, embodied in a writer that one can hear and know. Now I am on the other side of the academy… And I observe that many colleagues, great experts in literature, can spend their lives without sitting down to talk with an author.

P. What are the consequences of this distance?

R. They are different styles, although equally valuable. I have met very serious researchers who have written very good books without seeking closeness with the authors. It’s not my case. For me, literature is traversed by life, and reading is important, but living is also important, and making reading a part of life. That is why Havana has been so important to me, because it is a place where everything intersects: life, theater, literature, cinema.

P. It is a matter of literature.

R. It is a literary place for many reasons… One can imagine Havana through all that has been written about the city in the 17th and 18th centuries. And there is Havana made of the books by Carpentier, Cabrera Infante, Virgilio Piñera, Severo Sarduy… And, more recently, a Havana by Pedro Juan Gutiérrez. There is a paper, literary Havana. But it is also a place where language is present in the streets with great energy. One can speak to anyone, a teacher, a street sweeper, a minister, and almost all Havanans enjoy language. I listen to them and think that when they speak they seem to have studied Cicero’s rhetoric manual.

P. Where does it come from?

R. It comes from listening to other people on the street. It is impressive that three or four year olds already have those elements. And it also comes from a culture that until two years ago had neither internet nor networks. What people did to pass the time was to talk and tell stories, make stories … It is something that has been in Havana since the 18th century. Dr. Céspedes published a book on prostitution in Havana in 1880 and it seems written today. There is a sensuality, an eroticism in the streets, a seductive language that is everywhere. It seems like I’m talking about Havana today!

P. What writer would be the one who best makes this synthesis of the literature and the language of the street?

R. That is now being discussed in Cuba. There are two schools. There is Antón Arrufat, poet, playwright, whom I love and admire. He has always defended a literature that uses language to create an ideal reality, which is more perfect than real life with all its problems: famine, political conflicts, deficiencies of all kinds. He comes from the Lezama Lima school, where language is an instrument to build an artificial, idealized world. And then there is another school, that of Pedro Juan Gutiérrez, Carlos Díaz or Carlos Celdrán, who think that the raw material of literature is in the street, in popular speech, in what happens in the lots. When one reads the Dirty trilogy of Havana, Gutiérrez, a series of solar gossip is found, but transformed into literature, as Boccaccio did in the Decameron.

P. In his book Death in Havana this city is speaking in the lots.

R. He speaks in Cuba, but especially in Havana, it is something so alive, so full of spark. We bought the Sarduy archive from Princeton, whom I admire very much. His partner for thirty years, François Wahl, told me that when Severo was already very ill in the hospital, around 1993, dying of AIDS, he told a Cuban friend who went to visit him: “I would like to go back to Havana, although be a few hours, to hear how people speak ”. That says everything. Speech in Havana is an injection of energy, of adrenaline, of life. That is why Cabrera Infante, in Three sad tigers, it tries to rebuild that world where people talk, tell stories, use language to flirt, to flirt, and it is a world where the night plays a very important role. One of the things I worked on Death in Havana is that there are many registers of language, many levels, worlds that communicate with each other. The revolution has created its own language, like all revolutions. The one you are in Granma or in the communiqués it is totally different from the one you find on the street. It is a petrified language.

P. This novel reconstructs a murder and has counted it with all the elements of the Malecón: the flirt, the extortion, the whore, the fatter (prostituto homosexual). It seems you have been listening to it as you type. Why did you choose this issue?

R. The novel tells the true story of a Valencian who comes to live in Cuba in the nineties and finds paradise. He told his friends: “Cuba is the best country in the world, you can live, nothing will ever happen to me, it is a safe country, there is no crime.” And ends up murdered. That character interested me a lot. The novel chose me. Eliézer, who has one of the best bookstores in Havana, told me about it. And that Manolo who is the protagonist of the event was getting into my body, into my blood, until I ended up writing about him. I was interested in that fantasy that many foreigners have of seeing a paradise in Cuba, they fall in love with what they see and decide to change their life to be able to live there. In the end, that paradise turned into hell for poor Manuel. The press did not say anything about that event, because his family did not want to, in fact there is only one article in The Valencian mercantile. All the research I did was oral, people who knew Manuel, boys from the Malecón, who always spoke to me about him with great affection, something that impressed me.

P. Talk about heaven and hell. In real, not novelistic terms, what would the Cuban hell be today?

R. Cuba has suffered greatly from the pandemic. And he has also accumulated several hits. One was the arrival of Trump and the return to an American policy towards the island that Obama had tried to leave behind. Trump once again included Cuba in the countries that promote terrorism and once again strengthened the economic blockade against the island, removed cruises, stopped North American tourism to the island. For Cuba it was a terrible economic blow. And then came the pandemic, another huge blow. They have been very difficult years, perhaps one of the most hellish moments in the history of Cuba. Although throughout history Cuba has always known how to survive and resist.

Explainer: How the Northern Ireland protocol divides Britain and the EU