In the end, higher league quality prevailed at Wembley. But only just.

Rotherham were seconds from a disappointing but served defeat in the final Papa John’s Trophy, having been second-best throughout to League Two Sutton.

But substitute Jordi Osei-Tutu broke them out of jail in the sixth minute of stoppage time and, with Sutton’s spirit finally broken, they went ahead through Chiedozie Ogbene’s piledriver in extra time. 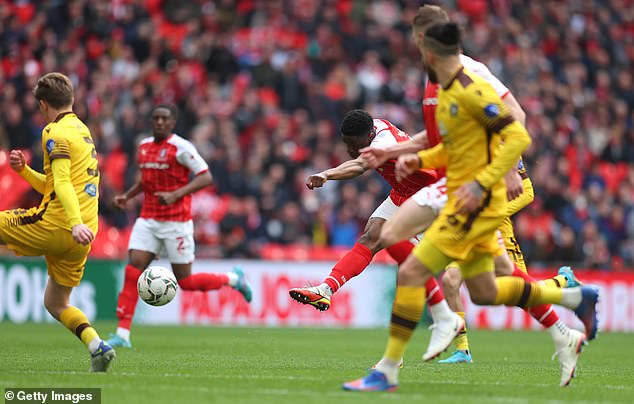 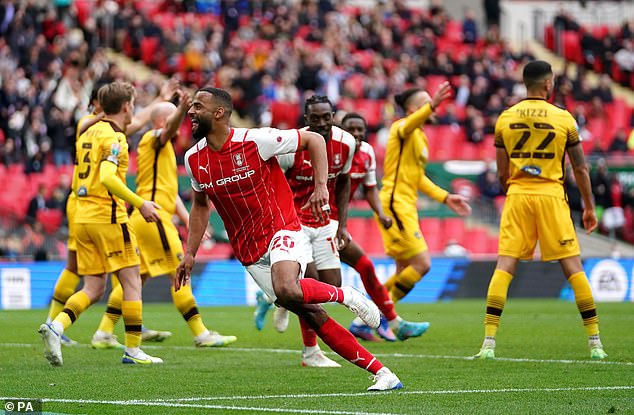 In fairness to Ogbene, enjoying a good week after his bicycle kick for the Republic of Ireland against Belgium, it was a worthy finish of settling a Wembley final.

Michael Ihiekwe headed a fourth for Rotherham, which seemed a bit harsh on Sutton given how close they’d come to another fairytale success just months after winning promotion to the EFL for the first time in 123 years of history.

If we’d had, say, five minutes of stoppage time instead of seven, then Sutton’s captain marvel Craig Eastmond would have been the hero. His name of him was just being announced as man of the match when Osei-Tutu found the net and spared Rotherham.

Paul Warne’s Millers have loftier ambitions of winning promotion back to the Championship this season but silverware here is a nice bonus and keeps their momentum going. 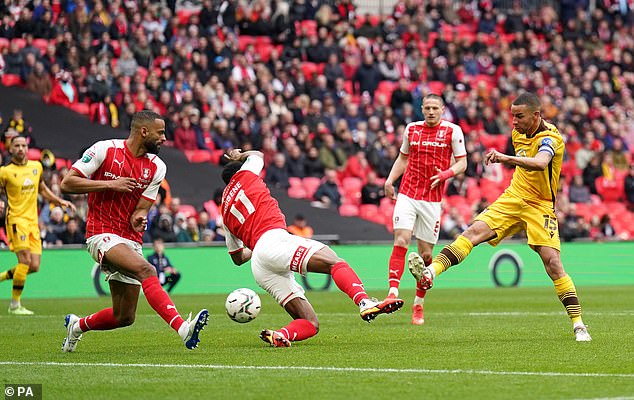 But they were far from at their best, falling behind to Donovan Wilson’s goal on the half-hour before Ben Wiles produced a moment of magic to equalize just before the break.

Back came Sutton, with Eastmond restoring their lead shortly after the restart, a lead they held until minute 96 when Rotherham escaped to victory and won this competition for the second time.

See also  The PSOE recovers some of its bellows and Vox improves a few tenths at the expense of the PP, according to the CIS | Politics

Proceedings at Wembley began with the slightly surreal sight of celebrity Rotherham fan Paul Chuckle – of Chucklevision fame in the 1990s – zipping down the touchline on a moped to deliver the matchball.

And there was plenty of ‘to me, to you’ about the opening exchanges as both sides felt their way into the end. Rotherham saw plenty of the ball inside the Sutton half but it was the League Two side that should have led on 13 minutes. 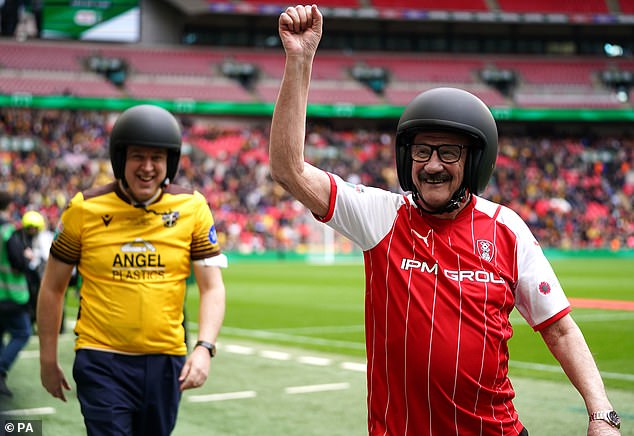 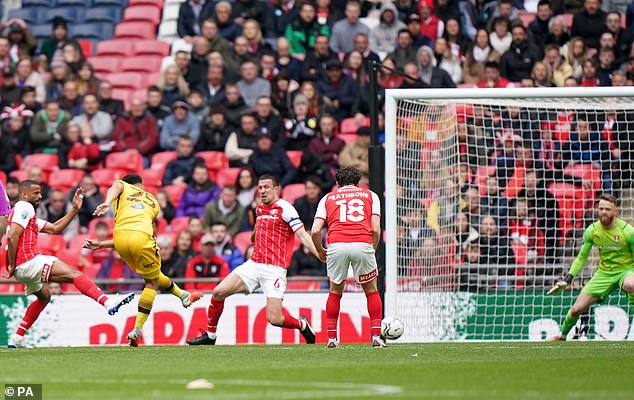 David Ajiboye sparked the move with a mazy run from just inside his own half with three red shirts in frantic pursuit. All of Rotherham’s defenders seemed to be drawn to him, leaving plenty of space for Will Randall wide on the left.

Ajiboye located Randall and he stepped inside a desperate slide tackle before firing into the side-netting from 10 yards with the goal at his mercy.

Sutton’s Amber Army probably felt that miss would prove costly but they were sent into pure delirium on the half-hour.

From their second corner of the contest, Rotherham just couldn’t get the ball fully clear. Ajiboye delivered a cross from the right that bounced off Michael Smith to Randall inside the box.

He spotted that Wilson was in a better shooting position, just inside the area, and laid the ball back. Wilson’s bottom corner finish was precise and sparked a mad sprint to celebrate in front of their fans at the opposite end of Wembley.

As half-time approached, the Rotherham fans were growing increasingly impatient. ‘Sort it out, Warne’ was repeated roughly every 30 seconds by one supporter. 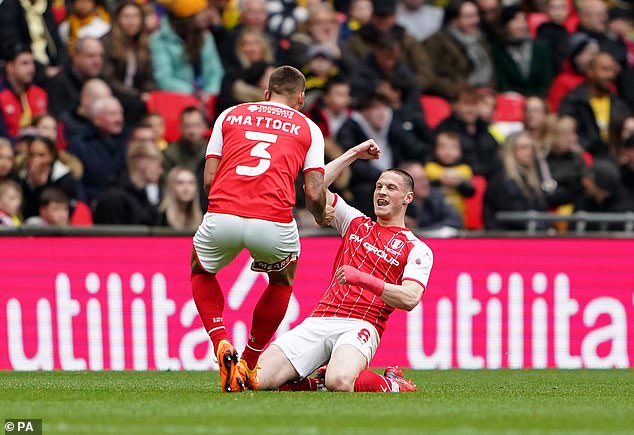 They’d created very little in truth all half and so it was maybe just as well that Wiles conjured a moment of magic completely out of the blue.

It was a goal before the Wembley final. Smith knocked down a long ball before Joshua Kayode laid it into his path, with Wiles stepping forward into a pocket of space before curling home an immaculate shot that looped over the outstretched arm of Dean Bouzanis and high into the net.

The half-time conversation centered around whether Sutton could find a second wind. They could.

Just three minutes after the restart, Captain Eastmond restored their lead. Once again Ajiboye created the danger down the right side, running into space before the perfect cutback found Eastmond just inside the box.

His first attempt at goal was blocked by the boot of Michael Ihiekwe but Eastmond received a second bite and prodded home, marking the moment with a fine knee slide.

Rotherham, who went close through Wiles moments before the goal, needed an injection of energy and Warne turned to Freddie Ladapo and Wes Harding on the hour.

They did find some fresh impetus and Wiles bobbled a shot towards the bottom corner that Bouzanis scrambled to keep out.

Sutton responded in kind by introducing Isaac Olofe and seconds after coming on he fired into the side-netting after breaking past Richard Wood down the right.

Rotherham rallied in the final quarter-hour with Freddie Ladapo sent clean through on the Sutton goal by a defence-splitting pass by Wiles. Perhaps with too much time to pick his shot from him, Ladapo was denied by Bouzanis. 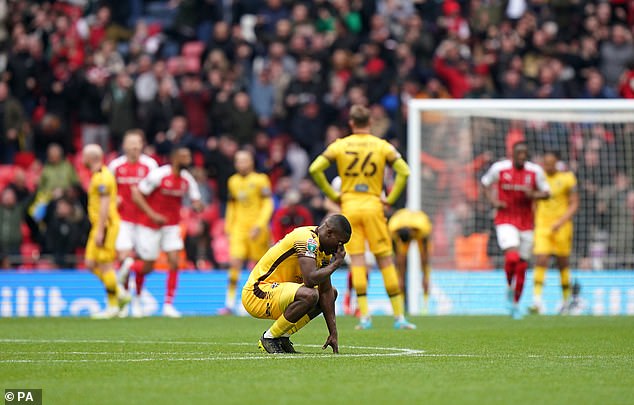 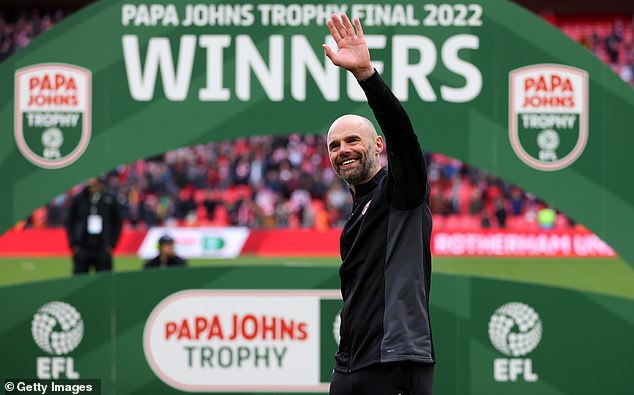 In the first of seven minutes of stoppage time, Smith was thwarted by a crucial block by Ben Wyatt.

Even later, with the final roll of the dice, Rotherham equalised. Osei-Tutu had been thrown on by Warne with 10 minutes remaining and found himself in the right place at the right time to force extra time.

Unguarded on the left-side of the box, Osei-Tutu managed to guide the ball over a clutch of Sutton players into the far corner, via a deflection off Bouzanis, to spark mad Millers celebrations.

Inevitably, that transferred all the momentum to Rotherham and they led for the first time all afternoon six minutes into extra time.

It was a cracker of a strike by Ogbene from 25 yards after Ladapo found him, the ball swerving and dipping to deceive Bouzanis as it flew past him.

Rotherham went in for the kill, with Bouzanis standing strong at his near post to deny Ladapo after an initial headed effort by Ihiekwe came back off the woodwork.

Their fourth came when Ihiekwe rose highest at the back spot to head home from a corner and that was the game. 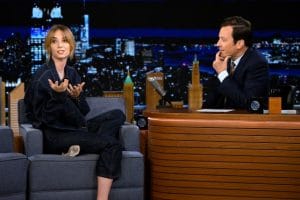