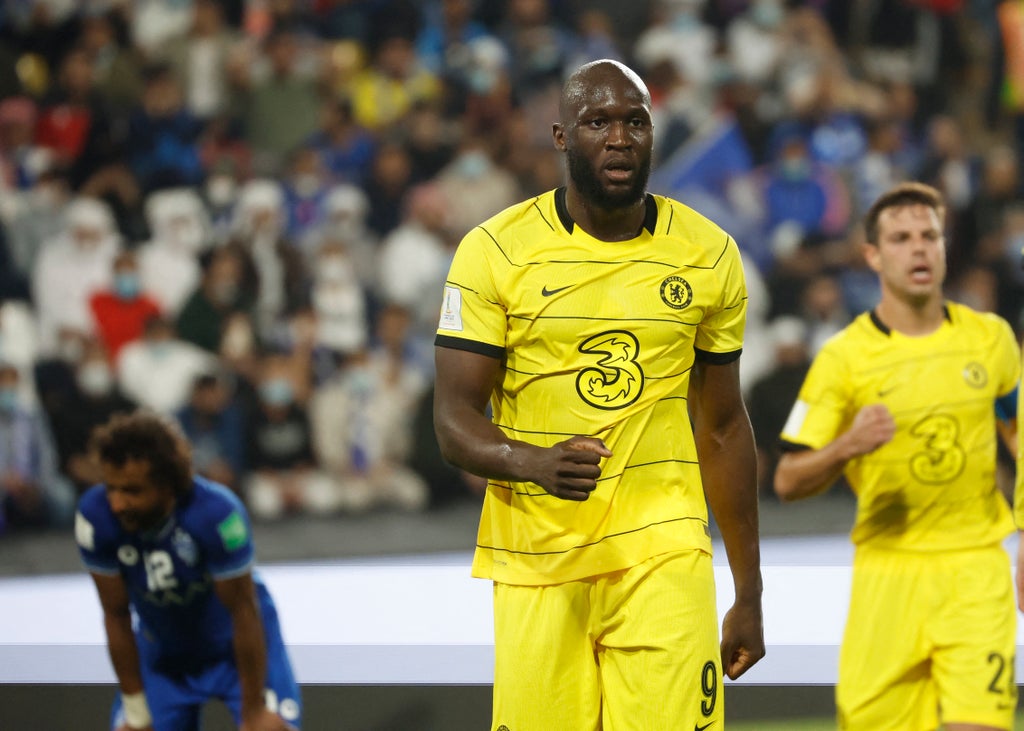 Chelsea reach the final of the Club World Cup, as predicted, but just not in a manner they would have expected.

The European champions were made to work embarrassingly hard against Saudi Arabia’s Al Hilal for an underwhelming 1-0 victory, secured by Romelu Lukaku. The fact the striker had again scored – his first in a month and only his second in 2022 so far, the other against Chesterfield – was one of the few positives, but the game mostly showed why Chelsea had at one point considered Al Hilal manager Leonardo Jardim as a potential candidate for the Stamford Bridge hotseat.

There remain some concerns for the team, as the absence of Thomas Tuchel again brought an absence of any kind of conviction against very moderate opponents.

Al Hilal almost followed League One’s Plymouth Argyle in forcing Chelsea to extra time in successive games, and it might have been even worse had it not been for the inspired form of Kepa Arrizabalaga.

One of his stops was brilliant, particularly as he was unsighted.

Chelsea’s problems were all too visible. They still look so disconnected in attack – and that despite the return of Kai Havertz – but now that bit looser in defence.

Whether that is just down to the simple effect of the manager again not being there, having had a positive Covid test, remains to be seen.

There is some optimism he may return here for Saturday’s final, in the same stadium.

It might well feel like an away game, given the number of Palmeiras supporters in Abu Dhabi. This came close, as a half-full stadium was mostly occupied by Al Hilal fans, who had made the relatively short trip.

They certainly made all of the noise.

There were long enough periods when the game had the ingredients for a comedy defeat, to render the whole trip a farce for the European champions.

Chelsea naturally had a lot of the play, but were sloppy up front and at the back. It was just that Al Hilal were understandably sloppier. They have worse players – but players who were willing to fight for this.

That is perhaps the effect of a manager who had until recently been considered one of the best coaches in Europe, making it all the more surprising he isn’t at a Champions League club.

Jardim ensured that there were constantly four players around their six-yard box for any attack, making it difficult for Chelsea – and especially Lukaku – to find space. Tuchel’s side had evidently noted some fragility in goalkeeper Abdullah Almuaiouf, as his players tried a lot of long shots. Even Thiago Silva had a go, driving a half-volley from distance.

It summed up an element of Chelsea trying to force it in the early stages, just as they did against Plymouth Argyle on Saturday.

There was a slight element of anxiety to their attacking. Hakim Ziyech snatched at one effort, before Lukaku missed a ball from Cesar Azpilicueta that was begging to be touched in. For the Belgian’s part, the ball did bobble up on a poor pitch just before it reached him. Minutes later, he seemed to beat Almuaiouf with a low drive, only for the goalkeeper to collect the ball as it was about to trickle behind him.

Amid all of this, Al Hilal sensed opportunity. It was easy to see one of those moments when a loose ball suddenly fell to one of their attackers on the edge of the box – not least Odion Ighalo or the effervescent Mohamed Kanno – and it came close to happening a few times.

Chelsea were so often forced into hacking the ball away.

Even well into the second half, Kepa had to produce two brilliant saves. The spectacular dive to keep out Moussa Marega’s effort was particularly special. It summed up a goalkeeper in excellent form, which makes it somewhat unfortunate for him that Edouard Mendy is now back with the squad, but a Chelsea team well below their best.

They were often second best to so many loose balls.

It was just as well that Lukaku had got his goal before Al Hilal sensed there was an opportunity here.

It summed up the only real difference between the teams on the night: basic quality – but not application or tactics.

Kai Havert did well to win the ball in the Al Hilal box and fashion the chance, but it was still dependent on some defensive uncertainty from Mohammed Alburayk and Ali Al Bulayhi.

Lukaku, by contrast, was certain to score from here.

He absolutely lashed the ball in from inside the six-yard box.

It was a finish that represented a sense of release, and a celebration – if that’s what you can call about – that betrayed some relief.

Chelsea probably shouldn’t be feeling like that after playing close to a full team in a forgiving match, but that was very much the mood. They will have to considerably sharpen up if they want to win this trophy for the first time. Much of this felt much more relevant, however, to the bigger trophies to come.