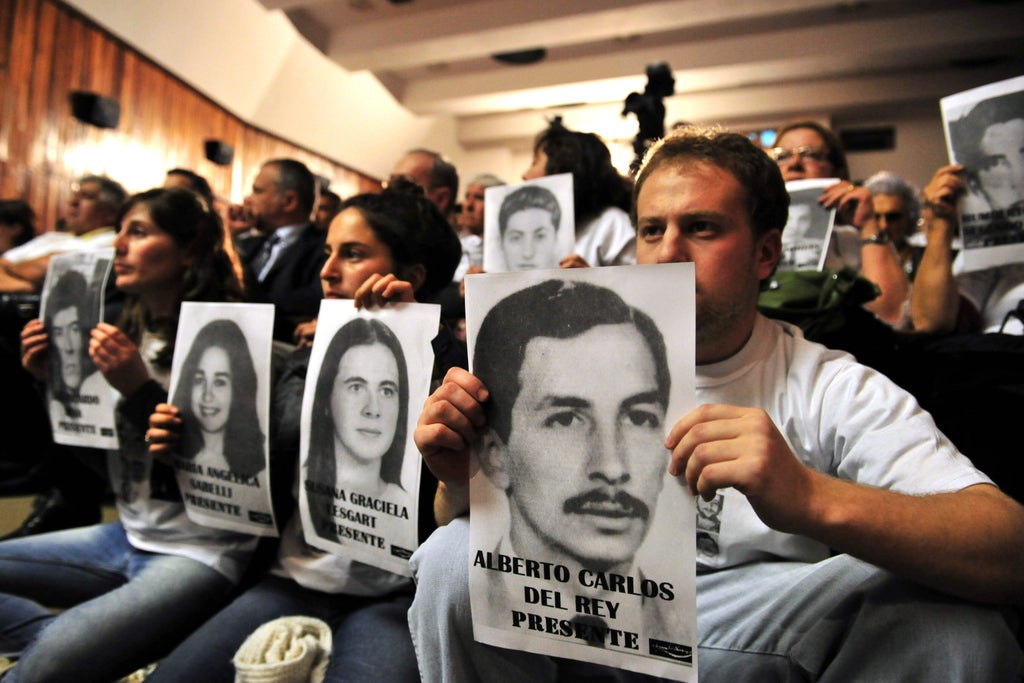 TO 79-year-old man who has been living in Florida for decades, is finally to go on trial over his alleged participation in the mass shooting of at least 19 people in Argentina 50 years ago.

Roberto Guillermo Bravo, a former officer in the Argentine navy and who later served as a diplomat in the US, is accused of involvement in what became known as the Trelew Massacre, a mass shooting of political prisoners in August 1972 while Argentina was ruled by a military-backed dictatorship.

For decades, the families of 16 people who were killed that day, along with those of three people who survived only to be later “disappeared”, struggled to obtain even the most basic information about what happened to their loved ones, some of the estimated 30,000 to lose their lives during what has been ended the nation’s “dirty war”.

But activists in the US, working in conjunction with some of those families, have now served papers against Mr Bravo, bringing a civil action rather than a criminal case, under the Torture Victim Protection Act.

Later this month, lawyers for the families will present evidence they say will show Mr Bravo took part in the massacre, and ask the jury to find him legally responsible and award both compensatory and punitive damages. Mr Bravo has rejected the claims.

Ela Matthews, an attorney for the San Francisco-based Center for Justice and Accountability, said the case was very much focused on the anguish and pain suffered by the relatives of those who were killed 50 years. Yet, she said the action also carried a broader message.

“The case is about our clients’ quest for justice for 50 years, but I think our clients do see themselves as representatives for all the families of the massacre,” she told The Independent. She said the CJA had a record of helping people around the world who were political prisoners or had stood up to “repressive regimes”.

The Trelew Massacre took place in the summer of 1972 and involved the shooting dead of a group of political prisoners – and other inmates – who had tried to escape from Rawson prison in Argentina’s Chubut province. They were later retaken and held at the Almirante Zar Aeronaval Base.

According to survivor testimony, in the early hours of Aug 22 1972, the prisoners were woken up, led from their cells and ordered to lie on the ground. A unit of troops led by Lt Cmdr Luis Emilio Sosa then opened fire. Mr Bravo was allegedly among the group.

The authorities immediately engaged in a cover-up that would last for years. The three survivors, who had witnessed what happened – María Antonia Berger, Rene Haidar and Alberto Camps – were themselves later murdered. The families of all the victims were persecuted and told to be quiet. Many fled Argentina.

“My father survived the Trelew Massacre and wanted to dedicate his life to expose the truth of what happened, but he was murdered before he could see justice,” Raquel Camps, who is one of the plaintiffs, said in a statement.

“I hope that the US justice system can help us achieve his goal, get accountability, and finally close this painful chapter in Argentine history by ending 50 years of impunity for Bravo.”

In the case against Mr Bravo, being held at the United States District Court for the Southern District, lawyers for the relatives will present evidence about the killing of Eduardo Cappello, Rubén Bonet, and Ana María Villareal de Santucho, as well as the attempted killing of the father of Ms Camps. They will also seek to explain how the killing impacted the victims, and the entire community.

The case has brought fresh attention to the “dirty war” in which thousands of civilians, activists and dissidents were murdered by the military. It has also shone a spotlight on the support for those military-backed governments by countries such as the US.

Argentina returned to democracy in 1983, with the election of president Raúl Alfonsín, a year after the Falklands War, fought between Britain and Argentina, over the Falkland Islands, or the Malvinas. More than 250 British troops and 650 members of the Argentine military were killed.

In October 2012, several decades after Argentina had returned to democracy, three of the military officers involved in the massacre, including Sosa, the commander, were found guilty of murder, following a trial in which their actions were described as war crimes. The three men were sentenced to life imprisonment.

Prosecutors in Argentina also want to try Mr Bravo for alleged murder and have been seeking his extradition to stand trial.

Mr Bravo is fighting efforts to extradite him to Argentina, and 10 years ago was successful when a previous attempt was made.

The former naval officer did not respond to inquiries. His lawyer for him, Neal Sonnett, also did not immediately respond to questions.

Previously, Mr Sonnett questioned the circumstances of the massacre and told an extradition hearing some of those killed were “terrorists”.

In 2020, I have told the miami heraldMr Bravo had moved to the US with his family in 1980 after retiring from the Argentine military and he was an “an honest, contributing businessman with an untarnished record”.

Speaking from Trelew, located in the region of Argentina known as Patagonia, Eduardo Hualpa, a lawyer for the victims’ families, told The Independent that for many years the massacre was little discussed in public.

The 2012 trial of the three military personnel was a major victory in the step towards justice, he said, and there were many people in the town who still remembered the massacre.

The case of Mr Bravo was being followed across the country.

Asked why it was so vital, and what it went to him, he said: “It’s very important. It is the final piece of the jigsaw in this case.”