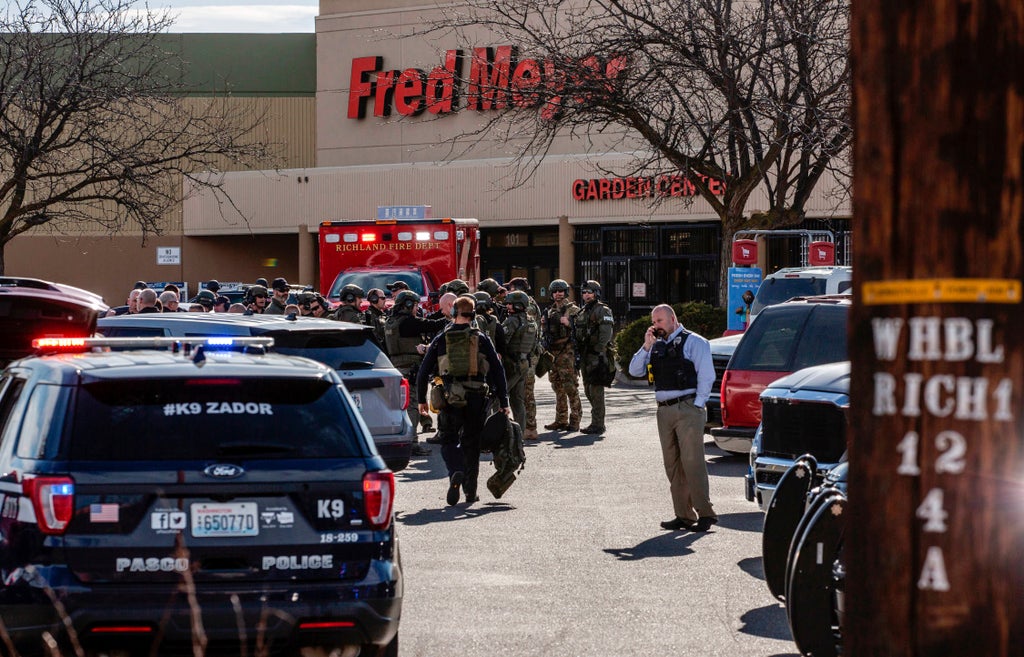 Fred Meyer shooting: Worker critical and one dead in Washington

Richland police have arrested the suspect they believe to be behind the multiple person shooting at a Fred Meyer in Richland, Washington.

Early on Monday morning, one person was killed and another, a Fred Meyer employee, was injured in the shooting.

Eyewitnesses claim to have heard as many as a dozen shots.

In a Facebook post the police said: “39-year-old Aaron Christopher Kelly has been taken into custody without incident.”

“Kelly was arrested on Interstate 90 between Sprague and the City of Spokane.”

Earlier, police identified the man killed in the shooting as 38-year-old Justin Krumbah.

‘No additional victims’ in shooting

Police earlier identified the two victims of the shooting as 38-year-old Justin Krumbah, who was killed in the incident, and an unnamed employee of the Fred Meyer store who is in hospital in a critical condition.

No other people were injured in the incident, Richland Police commander Chris Lee said.

the Tri-City Herald reported that Krumbah, a White male, was a customer at the store and that he and the shooter had an “interaction” before the latter opened fire.

Richland police have now arrested the suspect they believe to be behind the shooting at a Fred Meyer.

In a Facebook post the police said: “39-year-old Aaron Christopher Kelly has been taken into custody without incident.”

“Kelly was arrested on Interstate 90 between Sprague and the City of Spokane.”

Police said that Mr Kelly will be transported back to the Tri-Cities and booked into the Benton County Jail on charges of first degree murder and first degree attempted murder.

Earlier a nationwide arrest warrant for $1m had been issued by the police.

Police have identified Aaron Christopher Kelly as the suspect believed to be behind the multiple person shooting at a Fred Meyer in Richland, Washington.

In a Facebook post the Richland police department said: “39-year-old Aaron Christopher Kelly has been identified as the suspect in the shooting on 2/7 at the Richland Fred Meyer.”

“This shooting resulted in the death of 38-year-old Justin Krumbah.”

Police said that the hunt is on for Mr Kelly to take him into custody.

A first degree murder warrant has also been issued and Mr Kelly is believed to be driving a silver 2005 Honda Civic.

Police said that another victim who survived the shooting is in a critical condition in a nearby hospital.

A $1m nationwide arrest warrant has been issued for a suspect in Monday morning’s multiple-person shooting at a Fred Meyer store in Richland, Washington.

The warrant signed by judge Dave Peterson on Monday found probable cause for the arrest of 39-year-old Aaron Christopher Kelly, reported the Tri-city Herald.

See also  Ukraine-Russia war: Response to refugee crisis should change the way all those fleeing war are seen – Ewan Aitken

While Richland police department in their press briefing did not identify the shooter or the victims, an internal “officer safety” memo issued by Interim Police Chief Brigit Clary identifies Mr Kelly as a suspect in the shooting.

While the memo has not been made public by the police, residents have been posting it on their social media handles.

Mr Kelly has been described as 6-foot tall, weighing 190 pounds with blonde hair and blue eyes.

At the press briefing on Monday, Richland police said that they are continuing to hunt for an “armed and dangerous” man. Josh Marcus reports

How gun violence has affected Americans in recent days

Richland, Washington isn’t the only place struggling with instances of gun violence.

Here are some of the other major gun violence news stories The Independent have covered in recent weeks.

The Fred Meyer where an individual shot two people on Monday in Richland, Washington, will remain closed overnight as police process the crime scene.

It will take at least 6 more hours to go through the store, according to Richland police chief Brigit Clary.

ICYMI: Here’s what we know about the Fred Meyer shooting

After a day of reporting on the multi-person shooting that took place at a Fred Meyer grocery store in Washington, there are few details about who committed the crime or why.

Here’s everything we know on what took place, and what happens next.

See also  Couple quit jobs to save over £1,000 a month living in motorhome cruising round UK

Multiple federal agencies have joined the manhunt for an individual who shot multiple people inside a Washington grocery store on Monday.

The FBI, Drug Enforcement Agency, and US Marshals are all assisting Richland, Washington, police as they seek to find the suspect, who is accused of killing one person and seriously harming a second.

Where to find information about the Fred Meyer shooting in Washington

As police continue to investigate the multi-person shooting at a Fred Meyer grocery store in Washington, the best place for official updates is the Richland Police Department Facebook page, which you can find below.

Police are still hunting for the individual suspected of shooting two people at a Fred Meyer grocery store in Richland, Washington, but officials have located a person of interest in the case.

“We had multiple investigative efforts concentrated at the scene. Just through witnesses. We had a large amount of witnesses inside the store,” said Richland police chief Brigit Clary during a press conference on Monday. “We posted a picture on social media, and we had a lot of information flooding in regard to the suspect.”

Police aren’t releasing details about the person of interest to protect their ongoing investigation.