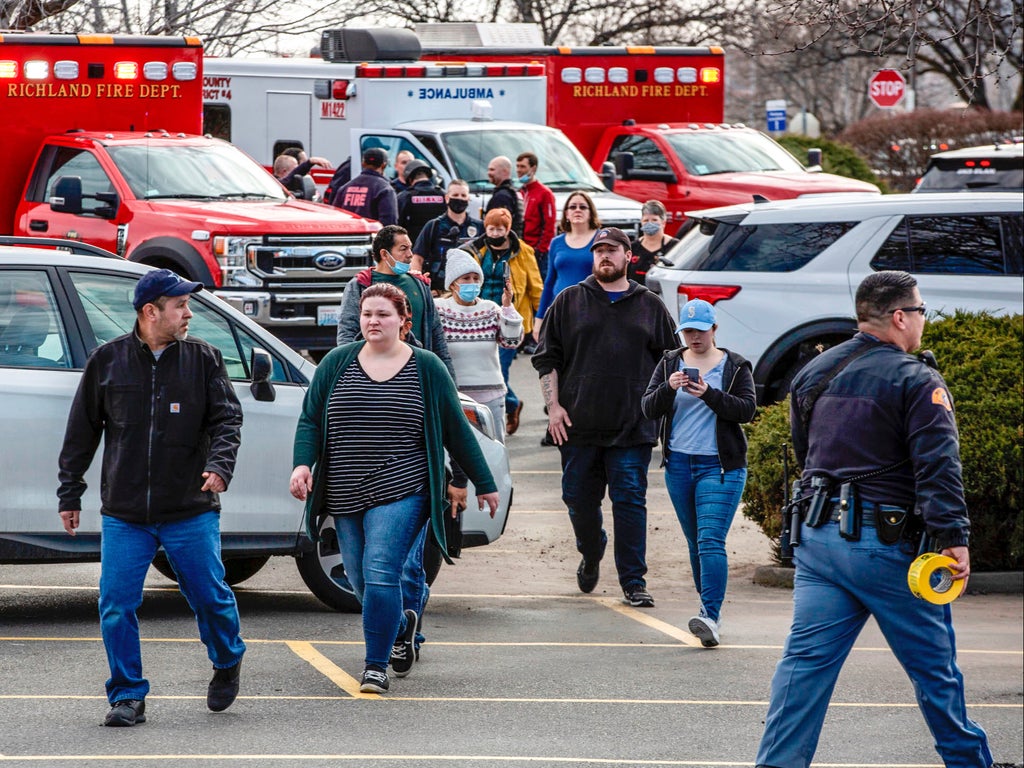 Community leaders and police have described the shooting at a supermarket in southeast Washington state as “senseless and tragic” following the death of an Instacart shopper.

Suspected gunman Aaron Christopher Kelly, 39, was arrested early Tuesday about 130 miles away from the Fred Meyer store in Richland where he allegedly shot two people, killing one and wounding another, on Monday morning.

Terrified shoppers and employees took shelter and were escorted out of the store after the gunman fled the scene, sparking an hours-long manhunt.

The person killed was identified as 38-year-old Justin Krumbah, an Instacart shopper beloved by his customers. The other man wounded, an employee who has not been named, was taken to a hospital in critical condition.

An investigation is ongoing and the FBI are assisting. Here’s everything we know so far about what happened.

When and where did the shooting happen?

Police were called to a Fred Meyer supermarket after 11am on Monday following reports of a shooting at the hypermarket on Wellsian Way, in the south of Richland, Washington.

The store remains closed on Tuesday as an investigation is carried out.

Business owners of neighboring buildings have meanwhile told news outlets about seeing people fleeing the store, with one man taking in a number of people who were sheltering while the situation was active.

The Richmond Police Department announced an end to the live shooting situation about an after their arrival at the store. Pictures were meanwhile released of a suspect walking out of the Fred Meyer with a shopping cart.

Richland is about 200 miles (320 kilometers) southeast of Seattle, and is part of the Tri-Cities area, which includes Kennewick and Pasco combined and has a population of more than 280,000.

What happened during the incident?

Details about what happened during the shooting remain few and far between, with no confirmation from police about where inside the store the shooting occurred – and no apparent reason for why the suspect shot at shoppers and employees of Fred Meyer.

Police said surveillance footage showed the shooter and his victim talking or interacting moments before a shot was fired, fatally. It is not known what the apparent conversation was about, nor if both men knew each other.

When officers entered the store at about 11.04am, police found two victims in close proximity to one another in the store. Employees and customers were escorted out while they went aisle by aisle searching for the shooter or other victims.

Local businessman Robert Cronkite told a local news station that his shop sheltered members of the public “for about 45 minutes” while the attack unfolded across the road at a Fred Meyer.

He also claimed that about a dozen people were treated for injuries after falling or fleeing the Fred Meyer, and that the victim was shot in the head and chest, although it has not been confirmed by police.

He had already died when police attempted life saving measures, and was later identified as Mr Krumbah, who reports suggested he was self-employed as a delivery worker for Instacart, the online shopping service.

He was well known to employees at the store – where his sister also works as a baker, according to her Facebook.

It was not known if Mr Krumbah was working on Monday while at the store and tributes have been paid on a GoFundMe set-up by a family friend, as well as on Facebook.

The second person who was shot remains in critical condition in hospital, police said. They have only been identified as a Fred Meyer employee.

Who is suspect Aaron Kelly?

An image of the shooter was shared across the Twi-Cities area on Monday night, and the Richland Police Department said they were “very confident that we will locate the suspect sooner than later,” thanks to about half a dozen agencies and the FBI assisting .

He was later identified as Mr Kelly, who was taken into custody “without incident” on an interstate highway about 150 miles north of Richland, Police said he had been driving a silver 2005 Honda Civic.

No further information was available.

How has the community reacted to news of the shooting?

Tributes have been left on Facebook to the victim, Mr Krumbah, who was described as a “breathe of fresh air” with a “positive, can do attitude” by his heartbroken customers – many of whom left tributes on his Facebook profile.

A GoFundMe for his family meanwhile said: “I didn’t get the opportunity to meet him, but I do know his sister Krista. She is an amazing person and have heard nothing but good things about Justin! If you can please help, it would be appreciated!”

Fred Meyer said in a statement that “The entire Fred Meyer Family offers our thoughts, prayers, and support to all affected individuals and families during this difficult time, and we have initiated counseling services for our associates.”

The Oregon-based supermarket chain is also working with police.

“Workers in our local grocery stores have experienced many safety concerns over the last two years under Covid,” added Eric Renner, the president of the United Food and Commercial Workers (UFCW) labor union.

“This tragic shooting is another shock to all of us.”