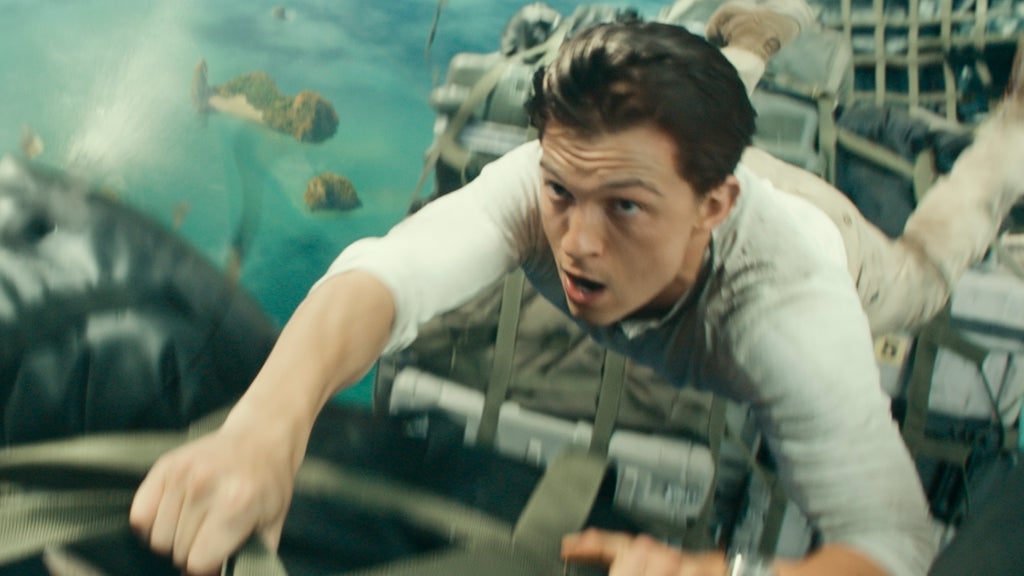 Goonies never say die, and neither do some of their storylines.

“Uncharted,” a new movie based on the PlayStation video game, cribs heavily from adventures like “The Goonies” and its holy grail, “Indiana Jones.” It’s the kind of movie that wears its influences proudly on its sleeve to perhaps enlarge itself by those associations. Nathan Drake (Tom Holland), who was raised in an orphanage, has no reptile phobia to speak of but when his travels brings him to a cathedral, he utters in a very Jonesian fashion: “Nuns. Why’s it always got to be nuns.”

“Uncharted” is the latest in a proliferation of video game adaptations, and it’s not hard to see why this PlayStation game, which launched with “Uncharted: Drake’s Fortune” in 2007, was quickly picked up by Hollywood. The game, which came a few years on the heels of “National Treasure,” with Nicolas Cage, was very much based on movies. So it’s probably inevitable that “Uncharted” feels like a copy of a copy.

But, you might think, so what? Globe-trotting adventures with puzzles and tunnels and booby trap are, by their nature, fun. Even a bland imitation — which is what “Uncharted” is — can be a good enough time. What you get out of “Uncharted” will likely depend on your standard of “a good enough time,” but you can’t fault it for skimping on scale, or failing to stuff itself to the gills with ancient texts and symbols and old maps If it’s treasure hunting you seek, regardless of reward, you have found it.

Director Ruben Fleischer, who eventually took over after “Uncharted” was in development for years with a long list of filmmakers, brings visual clarity and a touch of inventiveness to a handful of glossy set pieces. The movie opens with Nathan spinning through the air, a fitting place to start given that “Uncharted” trails Holland’s last flight in “Spider-Man: No Way Home,” by just two months.

But after a few swings behind a cargo plane, “Uncharted” jumps back to Nathan’s childhood in New York. He’s there with his older brother, Sam (Rudy Pankow), who describes them as descendants of the English explorer Sir Francis Drake and exhibits some of the same spirit of exploration. He’s particularly fixed on the path of Ferdinand Magellan and treasure said to have been hidden by his expedition in the 16th century. When they’re caught trying to steal Magellan’s map, Sam is kicked out of the orphanage and the two never see each other again. Nathan occasionally receives postcards from far away.

It is, for sure, a postcard-thin backstory. But “Uncharted” gets properly underway when Nathan, now working as a bartender and petty thief, encounters Victor “Sully” Sullivan (Mark Wahlberg), an old treasure-hunting companion of Nathan’s brother, who comes to him with a mission to find Magellan’s lost treasure. Once they’ve tracked down a pair of MacGuffins — er, ancient keys — they set off for more clues in Barcelona. They have some competition, including a maybe-trustworthy adventurer named Chloe (Sophie Ali). But their main foe is a wealthy Spanish descendant of the Moncada family that financed Magellan’s trip, still looking to recoup. He’s played by Antonio Banderas, in his most growling villain mode of him, who’s joined by a lethal martial artist (Tati Gabrielle).

The buddy movie balance of “Uncharted” never clicks. Wahlberg, who was once attached to play Holland’s part, plays Sully like Nathan’s roguish, less tech-savvy elder. But they lack the needed chemistry and the script, by Rafe Lee Judkins, Matt Holloway and Art Marcum, doesn’t give them enough comic material to do much with. “Uncharted” is propelled instead by Holland’s boyish enthusiasm. He’s an awfully earnest protagonist for a swashbuckler like “Uncharted.” There isn’t a hint of danger in him, nor is there any romance found along the way. Instead, Fleischer’s film has retrofitted a kind of coming-of-age story to suit Holland’s generic but sweet do-gooder charm.It’s hard not to nod in agreement when Chloe tells him: “You’re a good guy, Nate. Too good.”

There are other things a little out of sync in the wanly watchable “Uncharted.” Every artifact uncovered in pursuit of the lost gold would, in their own right, be worth a fortune. And the bad guys here are so well financed that they could probably just sell their gear and be equally wealthy.

But preposterousness, not realism, is the mission of “Uncharted.” And by that measure, the movie achieves what it set out to do in the Philippines finale that leads, like “The Goonies” did, to gold-filled underground ships. A high-speed helicopter chase dreams, with each towing a 16th century vessel. The “Fast & Furious” films are probably to blame, or thank, for the propensity of today’s action films to stretch toward increasingly absurd heights. But the “Uncharted” climax is so grandly silly to make you want to mutter an old “Goonies” line: “Hey, you guys.”

“Uncharted,” a Sony Pictures release, is rated PG-13 by the Motion Picture Association of America for violence/action and language. Running time: 116 minutes. Two stars out of four.