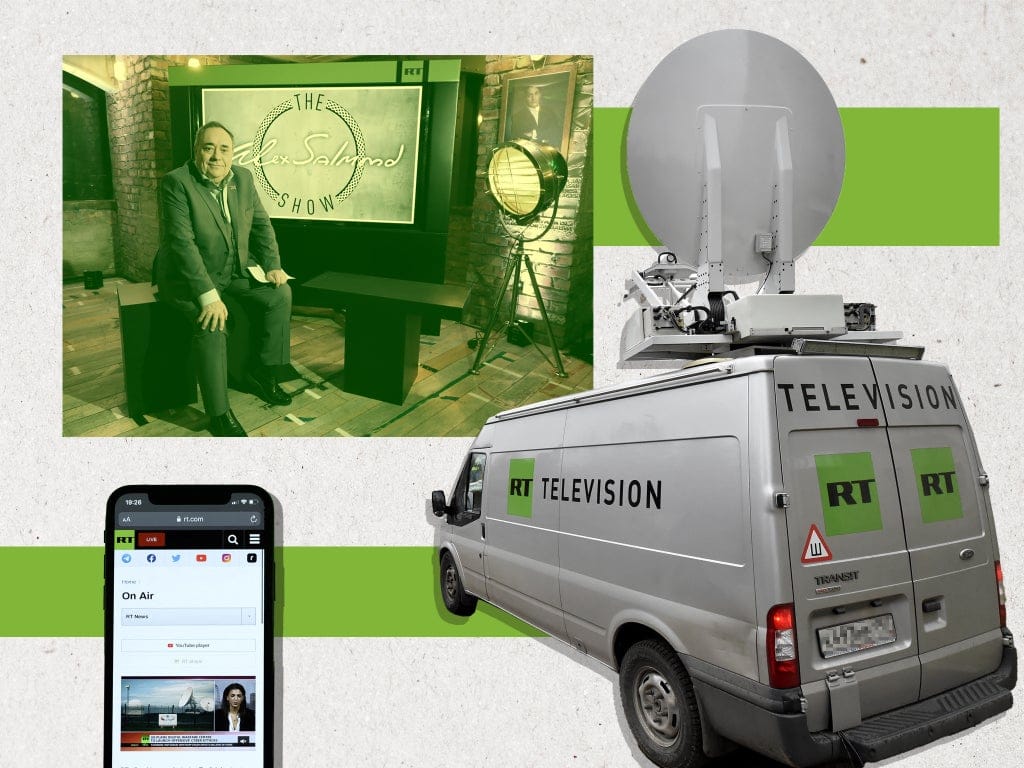 A British director running the firm behind the UK arm of RT – accused of broadcasting Kremlin propaganda – has earned more than £2million from it in just three years, The Independent can reveal.

Russian state-backed news channel RT, formerly known as Russia Today, has had its license to broadcast in the UK revoked by regulator Ofcom as it faces 29 investigations over its coverage of Vladimir Putin’s invasion of Ukraine.

The Independent can disclose that 57-year-old Christopher Wood – who moved to Moscow in the early 90s – has made millions from a company that has provided RT’s operations in the UK.

RT claims it “is an autonomous, non-profit organization that is publicly financed from the budget of the Russian Federation”. In the UK, though RT’s broadcasting licensee was Russian firm, ANO TV Novosti, Russia Today TV UK Ltd has been the firm behind its operations.

In a post dated 2017, RT’s website referred to the Russia Today TV UK Ltd as “the sole provider of all of RT’s operations in the UK”. Elsewhere in the same post, it referenced the firm as “RT’s UK operation”.

See also  Masks, ventilation and dinners with unvaccinated: how to organize a safe Christmas? | Hour 14 Weekend

Wood is the sole director and shareholder of Russia Today TV UK Ltd, records indicate. He has received £1,663,000 in dividends and £425,621 in director’s remuneration in three years, according to an analysis of Companies House records.

Little is known publicly about Wood but The Independent He has pieced together details about his life. Before he became director of the firm in 2005 when it was incorporated, he lived in Russia with his wife Elvira, an Estonian-born ballerina. They had two children born in Moscow; a daughter in 1995 and in 2002 a son, who is understood to have later been educated at a £18,330-a-year London private school.

On Friday, Wood’s brother, Nicholas, an architect based in Hertfordshire, told The Independent: “My brother’s over here at the moment winding it all up and he’s had to lay off 45 journalists or so… I think he’s rather sad at the way things have turned out, it’s certainly not a problem of his making or of his wanting. ”

He added: “My brother’s a businessman, he was working in Moscow and then got an opportunity to come over here and help them set up something over here, which he did as a business and her ran it as a business… I don’t think he’s got any political interests in that at all, it’s just running it as a business.”

I have defended RT’s coverage, saying “if you look at the track record of it, it’s complied with the Ofcom requirements”. When pointed out it had been sanctioned by the regulator in the past, he added: “Yes it has, as all stations have, as you know, but it’s broadly tried to provide a service ….which complies with that.”

The EU has already moved to ban RT. Revoking RT’s license to broadcast in the UK with immediate effect on Friday, Ofcom said ANO TV Novosti was not “fit and proper”. Ofcom said: “Today’s decision comes amid 29 ongoing investigations by Ofcom into the due impartiality of RT’s news and current affairs coverage of Russia’s invasion of Ukraine. We consider the volume and potentially serious nature of the issues raised within such a short period to be of great concern – especially given RT’s compliance history, which has seen the channel fined £200,000 for previous due impartiality breaches.”

It added: “This investigation has taken account of a number of factors, including RT’s relationship with the Russian Federation. It has recognized that RT is funded by the Russian state, which has recently invaded a neighboring sovereign country. We also note new laws in Russia which effectively criminalize any independent journalism that departs from the Russian state’s own news narrative, in particular in relation to the invasion of Ukraine. We consider that given these constraints it appears impossible for RT to comply with the due impartiality rules of our Broadcasting Code in the circumstances.”

Wood’s firm Russia Today TV UK Ltd made a pre-tax profit of more than £1million and paid out £800,000 in interim dividends, according to its latest accounts for the year to 31 July 2020. His director’s remuneration totaled £144,443.

The company’s latest accounts, for the year ended 31 July 2020, highlighted the firm’s “operations and assets are not very well diversified”, adding “consequently there is always a risk of reduced activity due to economic or political factors”. The company employed an average number of 81 full-time employees in the year, the accounts said.

Christopher Wood was previously the majority shareholder of PTS, with Elvira Wood also owning shares, according to Companies House records. However, as of 1 February 2022 Elvira Wood held 75 per cent or more of the shares in the company, according to a filing published on Tuesday. Meanwhile, in an update also published on Tuesday, as of 1 February 2022 Christopher Wood is said to have “the right to exercise… significant influence or control over the company”.

Nicholas Wood, who said he had nothing to do with RT, told The Independent: “I have [Christopher] ran the company over there, PTS Moscow, and while he was doing that I was kind of helping him just very incidentally in the UK because I was based over here, I had my own business to run over here and it just enabled me to give support him and I think that’s why I was made a secretary so I could sign documents when he was looking for visas and things like that.

“If you look at the background of PTS Moscow you’ll find that it was a UK company and he basically freelanced over there providing services for ITV, BBC Panorama, BBC Newsnight, camera crews to support journalists that were going out there or that were based out there.”

Asked when his brother moved to Moscow, he said: “I don’t remember the exact date but it was early 1990s.”

Wood said that “it sounds like it [PTS Moscow] was migrated into PTS Ltd”. Asked what prompted his brother to move to Russia in the first place, he said: “He went out there with a journalist for TV-am.” Explaining his brother de él was a cameraman, he added: “When they closed down TV-am, he was left out there with nothing else to do so he freelanced [based in Moscow].”

RT was contacted for comment. An Ofcom spokesperson said: “Ofcom does not regulate Russia Today TV UK Ltd. The license for the RT service was held by ANO TV Novosti, which had editorial control over the service.”

In response to Ofcom revoking RT’s license, RT deputy editor-in-chief Anna Belkina said: “By ignoring RT’s completely clean record of four consecutive years and stating purely political reasons tied directly to the situation in Ukraine and yet completely unassociated to RT’s operations, structure, management or editorial output, Ofcom has falsely judged RT to not be ‘fit and proper’ and in doing so robbed the UK public of access to information.”