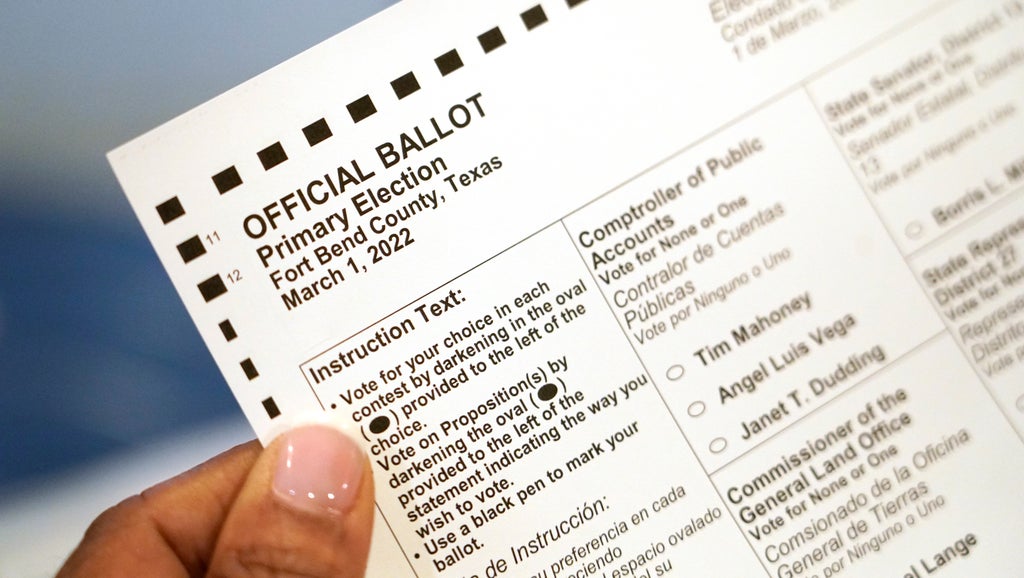 Texas begins early voting Monday in 2022’s first primary following a rushed rollout of tougher restrictions and the return of hundreds of mail ballots, dealing Republicans a clumsy debut of voting rules they tightened across the US over the past year in the name of election security.

“Monday is going to be a big day for all of us to see how this plays out,” said Isabel Longoria, the elections administrator for Harris County which includes Houston and more than 2 million voters.

“I think for all of us there is just a sense of uncertainty,” she said.

Election officials in Republican-leaning counties have also expressed frustration — and confusion — over changes they say they have scrambled to implement since Republican Gov. Greg Abbott in September signed a sweeping law that he said would make it “easier to vote and harder to cheat.” For hundreds of Texas voters whose mail ballots and ballot applications have been rejected in recent weeks, that is not the case.

Harris County election officials announced just days before the first votes were cast in person that 40% of mail ballots received so far had already been sent back, mostly because they did not include required identification and signatures now mandated under Texas law.

Texas is among at least 18 states that will hold elections this year with heightened restrictions — an outgrowth of former President Donald Trump’s repeated false claims that the 2020 election was stolen. Republicans have rejected Democrats’ protests that the changes would disenfranchise voters, particularly minorities.

But Texas had far less time than any other state to complete the work of changing how elections are run because of its especially early primary March 1 — two months before the next states, Indiana and Ohio, go to the polls in May.

How smoothly Texas’ primary goes in the coming weeks will be as closely watched as the current races, few of which are high-profile. For Republicans, Abbott is heavily favored over a crop of far right challengers in his campaign for a third term, but Attorney General Ken Paxton is fighting a tougher primary under the cloud of an FBI investigation.

Democrat Beto O’Rourke has an almost clear path for his party’s nomination for governor. One of the biggest races in South Texas, where Democrat in US Rep. Henry Cuellar is in a rematch against a progressive challenger, Jessica Cisneros, weeks after FBI agents searched his home for him.

It’s the first primary for new Texas Secretary of State John Scott, an Abbott appointee, who in an interview described the returned ballots and applications as voters adapting to the new rules.

He anticipates the May runoffs and November elections will run smoother, and said he does not think the issues so far and concerns expressed by local officials amount to a failure by the state.

But the issues have extended beyond voters navigating new requirements. When the League of Women Voters last month requested thousands of voter registration applications for new US citizens, the state said it could not fulfill the request because of paper supply chain shortages after the new law required the forms to be updated and reprinted.

Then, county election offices reported they were having to send back an unusually high number of mail ballot applications for not including required identification such as a driver’s license or Social Security number. Now, counties say they are sending back completed ballots for the same reason.

Voters have a chance to correct the ballot as long as it is returned by Election Day, which has left officials waiting to see how many come back.

Scott said the number of rejected mail ballot applications had failed to below 5 percent by this month.

He took the job as Texas’ chief election officers after serving previous roles under Abbott, but his appointment raised alarms among voting rights groups over his brief stint with Trump’s legal team that challenged the 2020 election results. Scott withdrew from the case after only a few days and said he does not dispute that President Joe Biden won the election.

Outside San Antonio, Kendall County Elections Administrator Staci Decker said mail ballot applications are at a low ahead of the primary in her overwhelmingly Republican county that voted for Trump by a margin of 3-to-1 in 2020.

The mostly rural county has for years kept a list of about 400 voters who are sent mail ballot applications. But Texas Republicans added a prohibition this year on government officials proactively sending out mail ballots, under the threat of felony charges and six months in jail.

Late Friday night, a federal judge issued a narrow order that blocked the state from enforcing that portion of the law around Houston and Austin But the order had no bearing on 251 of Texas’ 254 counties, including Kendall.

“We had 400 people that just sat there waiting for their application to come and they never did,” said Decker. She said her office de ella has sent about 500 ballots to voters this year, down from the 700 to 900 they normally mail.

Coronado is a corps member for the Associated Press/Report for America Statehouse News Initiative. Report for America is a nonprofit national service program that places journalists in local newsrooms to report on undercovered issues.