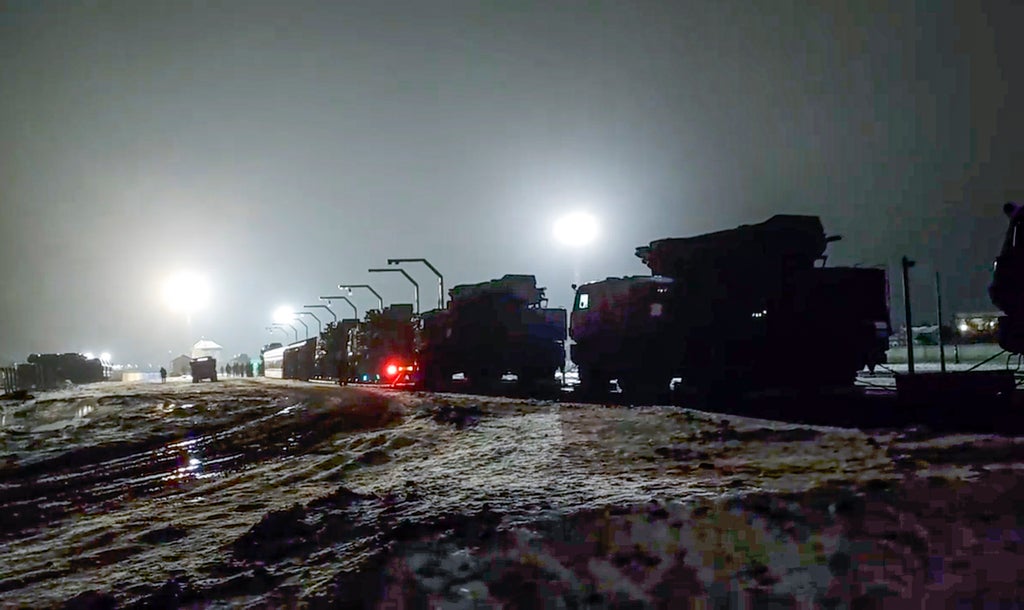 A Russian lawmaker is encouraging residents of rebel-held areas of Ukraine to join the Russian military, a sign Moscow continues to try to integrate those territories as much as possible amid Western fears that Russia plans to invade Ukraine. .

Viktor Vodolatsky said on Saturday that residents of regions controlled since 2014 by Russian-backed rebels fear attacks by Ukrainian forces and those with Russian passports would be welcome in the army.

“If Russian citizens residing in the (territories) want to join the Russian Armed Forces, the Rostov regional military commissariat will register and recruit them,” Vodolatsky, deputy chairman of the parliamentary committee on relations with neighbors, told the state news agency. Tass news.

Russia has issued passports to more than 500,000 people in the territories. Vodolatsky said the conscripts would serve in Russia, but that leaves open the option that they could join any future invasion force.

Russia has concentrated some 100,000 troops near Ukraine. US Defense Secretary Lloyd Austin said on Friday that President Vladimir Putin could use any part of the force of some 100,000 soldiers to seize Ukrainian cities and “significant territories” or to carry out “coercive acts or acts of violence.” provocative politicians.

Russia denies that it is planning an invasion, but maintains that Ukraine poses a security threat and demands that NATO promise never to allow Ukraine to join the alliance, as well as stop deploying alliance weapons near Russian borders and push back his forces. from Eastern Europe.

The US and NATO formally rejected those demands this week, though Washington outlined areas where discussions are possible, offering hope there might be a way to avoid war.

The Russian president has not publicly commented on the Western response, but Foreign Minister Sergey Lavrov said it leaves little chance of a deal.

“Although they say they will not change their positions, we will not change ours,” Lavrov told Russian radio stations in a live interview. “I don’t see any room for compromise here.”

“There will be no war to the extent that it depends on the Russian Federation, we do not want a war,” he added. “But we will not allow our interests to be rudely trampled on and ignored.”

A senior official in the administration of President Joe Biden said the United States welcomed Lavrov’s comments that Russia does not want war, “but this needs to be backed up with action. We need to see Russia withdrawing some of the troops it has deployed outside the Ukraine border and taking other de-escalation measures.” The official spoke on condition of anonymity because he was not authorized to speak publicly.

Lavrov said the United States suggested the two sides could talk about limits on the deployment of intermediate-range missiles, restrictions on military exercises and rules to prevent accidents between warships and aircraft. He said that the Russians proposed discussing such issues years ago, but Washington and its allies never agreed to them until now.

He also said those issues are secondary to Russia’s main concerns about NATO. He said international agreements say that the security of one nation should not come at the expense of another, and said he would send letters to his Western counterparts asking them to explain their failure to keep that promise.

See also  'When you move into a care home like Roselea Court, it can be a favorite place to create new memories'

Washington has warned Moscow of devastating sanctions if it invades Ukraine, including sanctions targeting senior Russian officials and key economic sectors. Lavrov said that Moscow had warned Washington that sanctions would amount to a complete severing of ties.

Meanwhile, NATO said it was beefing up its deterrence in the Baltic Sea region.

Russia has launched military exercises involving motorized infantry and artillery units in southwestern Russia, warplanes in Kaliningrad on the Baltic Sea, and dozens of warships in the Black Sea and the Arctic. Russian troops are also in Belarus for joint exercises, raising Western fears that Moscow could stage an attack on Ukraine from the north. The Ukrainian capital is 75 kilometers (less than 50 miles) from the border with Belarus.