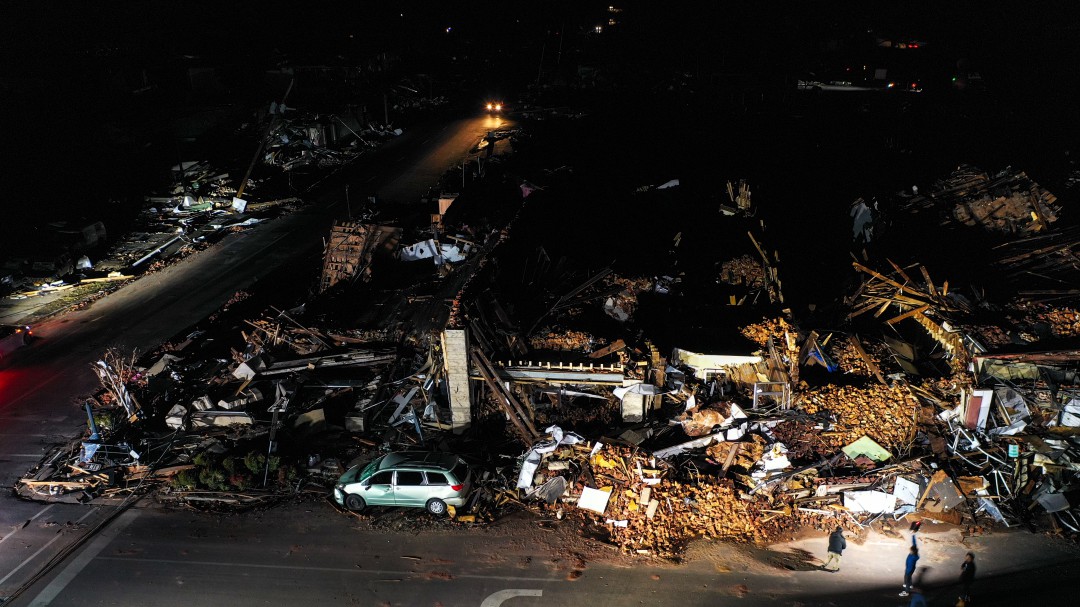 24 hours after a powerful tornado struck the small American town of Mayfield, Kentucky, the rescue continues in what was a candle factory and now only rubble remains and little hope of finding life at 70 o’clock. 110 people who were inside it and have not yet appeared.

If Mayfield is the epicenter of the wave of 32 tornadoes that made landfall on Friday night in the Mid-East region of the United States, the old factory is the heart of the few options to find any of the many people alive. missing.

Rescue work began soon after alarms sounded around 10:30 PM on Friday when he was hit squarely by a tornado believed to have broken all-time records, sweeping everything in its path for more than 200 miles (320 kilometers). and affect four states of the country. At least 70 people are feared to have died in Mayfield, a city of 10,000 now devastated and under a curfew until dawn.

“This event is the worst and most devastating tornado event in Kentucky history,” Kentucky Governor Andy Beshear said of the tornado that struck the candle factory, a family-owned business where, in bright sunlight, the outbreaks of dozens of firefighters from various neighboring regions are struggling to remove debris.

In an area guarded by National Guard soldiers, several bulldozers do not stop removing debris while the noise of power saws cutting metal is heard intermittently and thousands of sparks light up the clear Mayfield sky.

“We have lost more than 80 inhabitants”

Kentucky Governor Andy Beshear said Sunday that more than 80 people have died in that state as a result of the tornadoes that hit six states in the Middle East in the United States, and insisted that they will possibly exceed 100 moral victims. “I know we have lost more than 80 Kentuckians,” Beshear said in an interview with CNN, warning: “That number is going to exceed 100.”

Beshear did not immediately provide a missing person figure, but did illustrate that in Dawson Springs alone, a city of about 2,600 people, the list of missing persons is “approximately eight pages”. “I have towns that have disappeared,” he lamented.

Beshear reported that one of the tornadoes traveled more than 227 miles (about 365 kilometers) after making landfall, of which more than 200 miles (321 kilometers) corresponded to that state.

It was a tragic night in much of the country, because the 32 tornadoes made landfall in six states. The roof of an Amazon warehouse collapsed in Illinois and at least six people were killed shortly after one such tornado was reported to have made landfall and in Arkansas one person died when the roof of a nursing home partially collapsed.

The damage at Mayfield was even greater. In the town center, the police and fire stations were damaged and an officer explained that he was at the base along with several colleagues and relatives when the tornado passed, that he could see how the roof of the neighboring courthouse building passed and washed away .