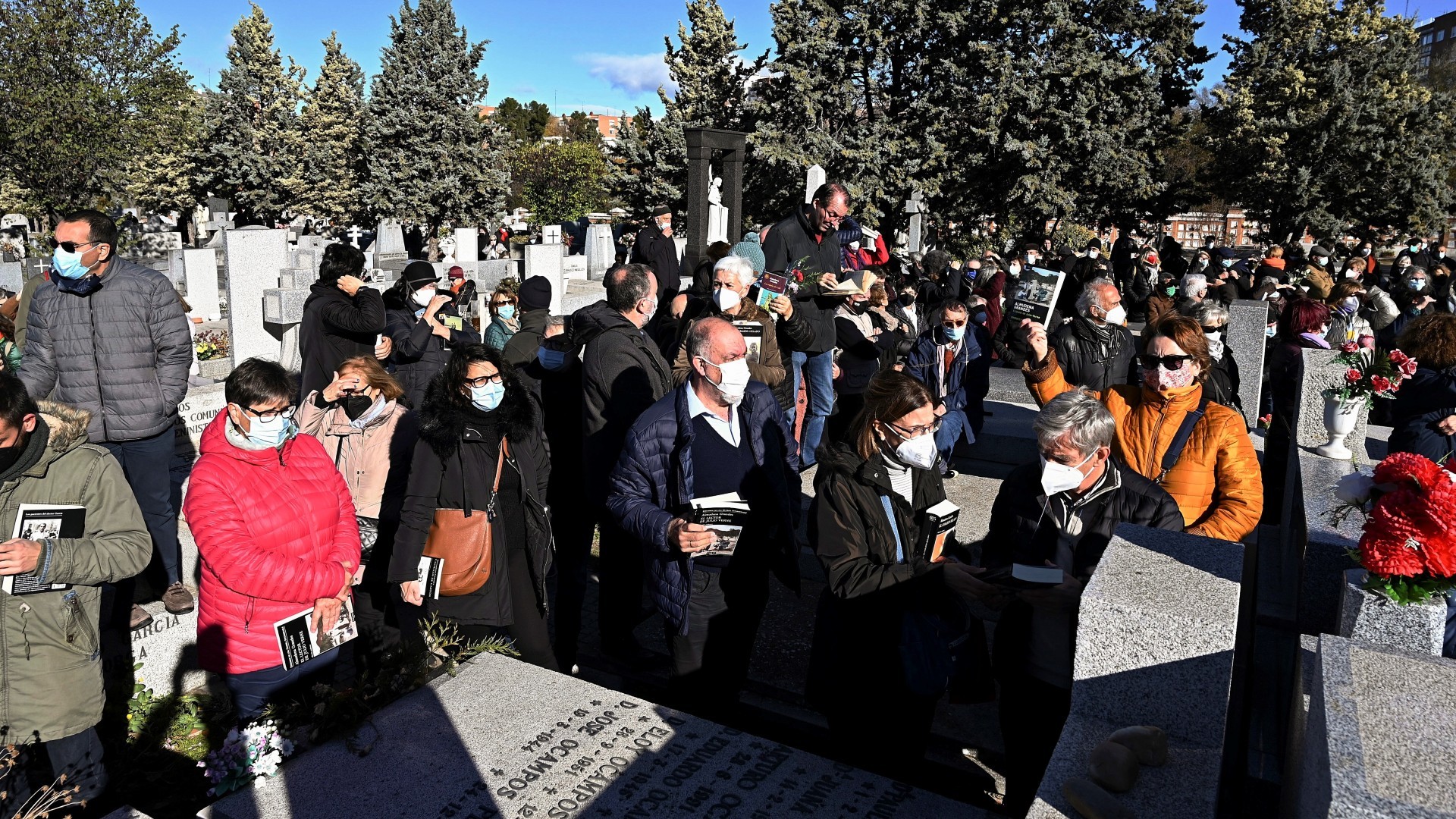 In silence and with his books raised to the passing of the hearse: this is how his friends, family and hundreds of readers have said goodbye to Almudena Grandes at his burial in the Madrid Civil Cemetery. A ceremony that was to be intimate has become massive after a call was broadcast to say goodbye to Grandes, passed away last Saturday, taking his works as a tribute, a farewell like the one José Saramago received after his death in Lisbon.

It was the journalist Ramón Lobo who promoted the convocation through social networks, to which the hundreds of attendees at his funeral have responded. His relatives have also come to him, such as her husband Luis Garcia Montero, poet and director of the Cervantes Institute, in addition to personalities such as the President of the Government, Pedro Sánchez or the second vice president, Yolanda Díaz.

Already hours before 12:00, time of the burial, hundreds of people have been silently concentrated around a large republican flag waiting for the entourage. When the hearse has passed, they have raised specimens like The Jules Verne Reader, The frozen heart O Agnes and joy, plus red carnations and more tricolor flags.

“Almudena Grandes’s coffin arrives at the Almudena cemetery. It has been received to applause by hundreds of people who carried books in honor of the writer.

During the emotional funeral, lasting about 40 minutes, several manifestos were read, including that of the singer Ana Belén, and also readings aloud of fragments of works by Grandes. The soundtrack has been set by the music of Joaquín Sabina, a personal friend of the writer.

The farewell to his readers: “For me he was a reference”

“I am a reader of Almudena Grandes and for me he was a reference, in his comings, his involvement and as a writer “, One of the attendees at the funeral explained to Radio Nacional, also with a book in hand. The assistants enter, two neighbors from Madrid, Adela Martínez and Victoria Tejedor, have shown EFE their great sorrow for the death of Almudena Grandes and have come with two of her novels: one of the Episodes of an endless war and The frozen heart written by the Madrid author.

Hundreds of people of all ages have come to Madrid’s civil cemetery to pay tribute to the writer with her books and red carnations: “He is a reference who loves culture”

Adela Martínez has assured that with his books he learned “what was the history of Spain” because what they said in school “was different.” “It was so unexpected”, lamented the follower of Grandes. For her part, Victoria Tejedor, who has chosen The Jules Verne Reader To attend this tribute, he said that he was a “very familiar person” and recalled the documentary Even if you do not know it starring Luis García Montero and in which Almudena Grandes appeared, and after seeing it he felt as if he had spent time with them.

Grandes will lie in the same cemetery that houses the remains of great figures of Spanish politics, such as the founder of the PSOE Pablo Iglesias, the historical leader of CCOO, Marcelino Camacho, or the leader of the PCE Dolores Ibárruri, “La Pasionaria”. Near his grave is also that of the writer Pío Baroja and that of the founder of the Free Institution of Education, Francisco Giner de los Ríos.

Many of those who have not been able to attend the farewell to Grandes have shared images with the books of the prolific author on social networks, winner of the National Narrative Award in 2018, and who died of cancer at the age of 61.

“I guess being down is a way to stay in love”

Before the funeral, the author’s widower, Luis García Montero, shared his gratitude on Twitter to all those who have expressed their regret for Grandes’ death. “Thank you for all the affection in the death of Almudena. I suppose that being sunk is a way to stay in love and to start a new life with the love of always “.

“Thank you for all the love in the death of Almudena. I suppose that being sunk is a way to stay in love and to start a new life with the love of always.“

This Monday, requests have multiplied to pay tribute to Almudena Grandes on the streets of her city, Madrid. The PSOE has asked to rename the Retiro Park Car Ride, iconic location of the Book Fair, where the writer was a regular at book signings. She will also demand in the municipal plenary session that she be named Favorite Daughter of the city.

For its part, Más Madrid has registered an initiative in the Madrid Assembly urging the regional government to dedicate the name to it ‘Parque de Almudena Grandes’ to the park that is being built on the Third Deposit of the Canal de Isabel II in memory of the Madrid writer