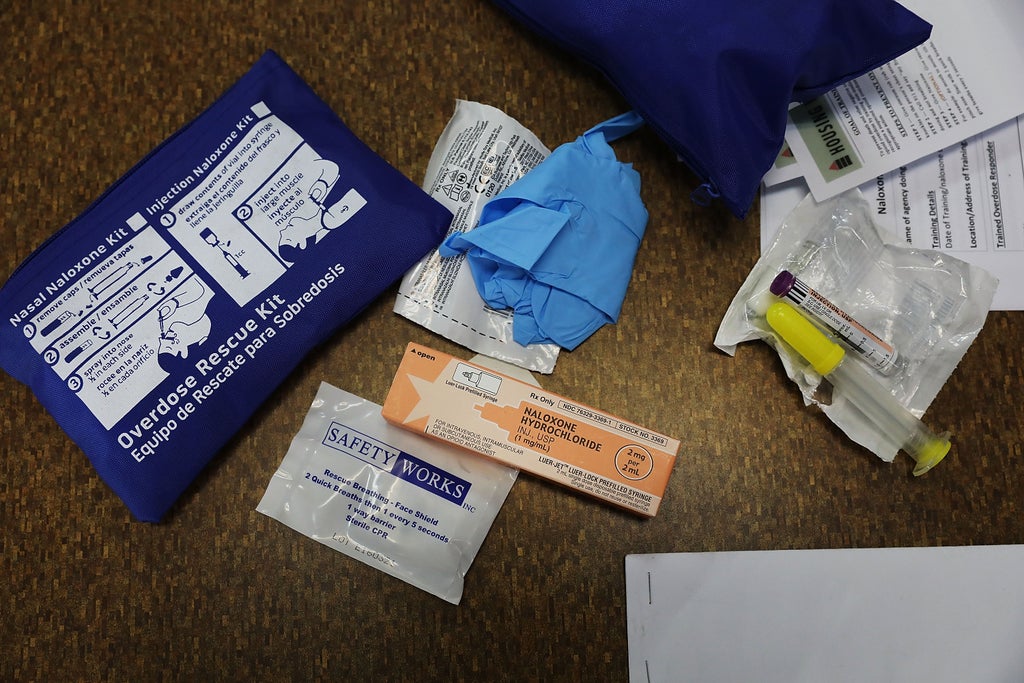 A federal program to combat disease and prevent deaths among drug users has launched a moral panic across right-wing media, parroting bad-faith attacks against a demonstrably effective public health approach against an overdose crisis.

In December, the US Department of Health and Human Services’ Substance Abuse and Mental Health Services Administration announced a grant application for organizations involved in harm reduction, a broad-based public health philosophy to reduce the harms associated with the risks of drug use.

That includes community-based initiatives for overdose prevention, substance abuse programmes, disease testing and other harm reduction services. Monday was the deadline for groups to apply for a share of the $30m federal program to be used for related supplies.

A focus on “crack pipes” – words that are nowhere to be found in the grant document – ​​ignores evidence showing why such resources are necessary against a crisis that has led to thousands of annual deaths, while Republican legislators weaponise widely misunderstood medical and social services and invoke racist dog whistles.

“It’s incredibly concerning, because we so desperately need programs to support people who use drugs, and to act on the best available evidence to pursue interventions that have a demonstrated impact on the wellbeing of this group,” says Ryan McNeil, director of Harm Reduction Research at Yale University and an assistant professor of internal medicine and public health.

“It’s appalling at this point that we’re having a response to drug-related harm driven by deep, deep stigma over people who use drugs,” he tells The Independent. “These arguments are never being made in good faith. … They’ve never been made in a way that actually considers the humanity in people who use drugs.”

Safe smoking kits are included on a list of 12 other examples of “equipment and supplies to enhance harm reduction efforts” on the agency’s grant document.

See also  Boots weight loss jab: How it works and is its safe as NHS approve

Grantees are required to submit quarterly reports on several metrics, including the number of people who are referred to other support services and evidence-based interventions at the community level.

Smoking kits, which have been available for years outside of government-funded programs, typically include rubber mouthpieces for glass pipes to prevent burns and cuts, screens to filter debris, and disinfectant wipes.

Pipes may also play a role in reducing the use of needles, which may present a higher risk of morbidity and mortality from overdoses and transmissible infections such as HIV and hepatitis C, soft tissue infections, and endocarditis, according to the Harm Reduction Journal.

Kit distribution also provides health and social support programs with a critical point of engagement for groups of people who already have limited or poor access to healthcare and other services.

“Distributing safer smoking kits is a way to connect [people who use drugs] with health services, offer public health info, and reach some of the most criminalized people,” according to the Drug Policy Alliance. “The only thing harm reduction enables is the ability to live safer, happier, healthier, fuller, more connected lives. We should all want that.”

The US is far behind other countries when it comes to harm reduction services while leading the world in overdose deaths.

More than 100,000 people died from an overdose in the 12 months leading up to April 2021, fueled by the rise in the use and accidental use of the synthetic opioid fentanyl.

The practice of harm reduction also expands to wider community investments, from housing and economic opportunity to repairing the impacts of racist drug policies and building a public health response that doesn’t lean on law enforcement and incarceration to combat drug use.

Two city-sanctioned facilities in New York City have reversed at least 124 overdoses since opening on 30 November, according to OnPoint NYC, which operates the sites.

Within the first few weeks of 2022 alone, the facilities have been used more than 2,000 times, and at 59 overdoses were reversed.

Sheila Vahariadeputy director of Research and Academic Engagement at the Drug Policy Alliance, explains that “smoking equipment is actually a health [and] racial equity issue” as Black, Indigenous and other communities of color are “disproportionately dying of these overdoses and need programs to meet them where they are at to give them the tools to stay alive and safe.”

A January 2022 analysis from Pew Research showed that Black, American Indian and Alaska Native men are demographic groups most likely to die from drug overdoses.

The Substance Abuse and Mental Health Services Administration announced the grant in December 2021, noting that funds were authorized through the American Rescue Plan passed by Congress and signed into law by the president earlier this year.

The funding “will provide support to those working in their communities to reduce the harms of drug use,” the agency announced.

“Providing funding and support for innovative harm reduction services is in line with the Biden-Harris Administration’s ongoing efforts to address the overdose epidemic and is a key pillar for the first time in the multi-faceted Health and Human Services’ overdose prevention strategy announced in October,” according to the announcement.

A harm reduction approach has never been a part of the federal government’s response to cocaine until now, according to the New Jersey Harm Reduction Coalition.

“Instead, Black residents who use cocaine were targeted with arrest, incarceration, loss of employment, and family separation,” the group said. “Allowing federal funds to be used for safer smoking supplies is a small and at the same time meaningful step in the right direction.”

On Tuesday, Republican officials sent out a series of false or at least grossly misleading and reductive understandings of harm reduction and the communities disproportionately impacted by poor health outcomes.

Senator Marco Rubio of Florida said the administration “is going to be sending crack pipes and meth pipes, targeting minority communities in this country.”

In a letter to Secretary Becerra, Senator Marsha Blackburn of Tennessee said she has “serious concerns” about “government-funded drug paraphernalia.”

“This is how humane policy dies,” writes Adam H Johnson. “A highly sophisticated right-wing media machine, appealing to people’s most base and racist instincts, quickly creates a meme, … liberal and centrist media largely ignores it, and Democrats in power don’t have the backbone to defend the policy on its merits , afraid of right-wing attacks or being smeared by a conservative machine loading up the issue in real time.”

Mr McNeil, director of Harm Reduction Research at Yale University, said right-wing media reports have revived the “racist discourse that has surrounded crack use for years,” pointing to policing and policies in the 1980s and 1990s around cocaine that disproportionately targeted Black Americans .

In a joint statement on Wednesday, HHS Secretary Becerra and White House drug policy adviser Rahul Gupta said that “no federal funding will be used directly or through subsequent reimbursement of grantees to put pipes in safe smoking kits.”

Rolling back federal efforts to support desperately needed community services is “deluding ourselves at this point if we think that’s an honest engagement with the evidence with intervention, or even in doing what’s right,” Mr McNeil says.

“We have to be nimble, we have to shift and we have to adapt … to what’s actually happening with the best available evidence to intervene, and have the political courage to do that.”