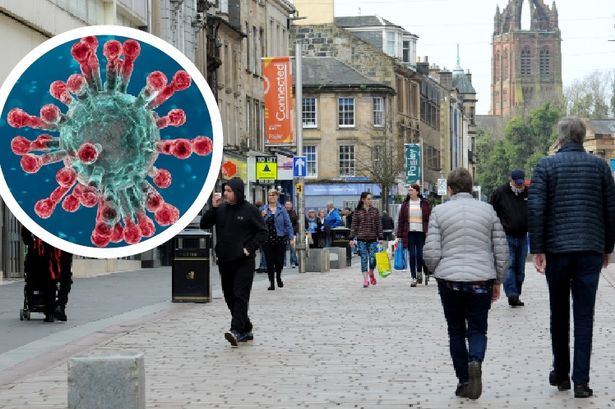 It comes as NHS Greater Glasgow and Clyde chiefs urged residents to steer clear of their stretched A&E departments this week, blaming Covid cases in part for ramping up capacity.

We told last week how the BA.2 subvariant, now responsible for most of Scotland’s covid cases appeared to have fueled a fresh spike in cases.

But cases over the week to March 20 rose again, with the seven day positivity case rate now standing at 3,265 – up from 3,083 the previous week.

NHS Greater Glasgow and Clyde said on Wednesday that the Royal Alexandra Hospital was treating 113 Covid patients who are less than 28 days from diagnosis.

Neighboring authorities have much lower case rates – including Inverclyde where 1,392 positive cases have been recorded over the same seven day period.

The City of Edinburgh is hard hit, with a seven day test positivity caseload of 7,194.

Despite the surge in cases, deaths in Renfrewshire have remained stable.

Data from the National Records of Scotland shows that one death took place in the area in the week beginning March 14, where the virus was mentioned on the death certificate.

The number of covid deaths in Renfrewshire has remained relatively stable for weeks, with the exception of the week beginning February 28, when six deaths were recorded.
There have been a total of 26 deaths recorded in the area, where Covid was mentioned on the death certificate, since the beginning of 2022.

Scottish figures show 118 deaths took place last week nationally, where the virus was mentioned on death records – the same as the previous week.

Women accounted for the majority of the deaths – 63 in total.

Once again, those aged 75 and over were the largest age group hit by the virus, with some 89 of the deaths amongst their number.

The City of Edinburgh and North Lanarkshire both logged the highest number of Covid-related deaths, with 11, while the Highland region saw 10.

Some 29 out of Scotland’s 32 council areas recorded at least one such death.

Hospitals were the location for 78 of the deaths, while 32 took place in care homes and eight were at home or in a non-institutional setting.

Pete Whitehouse, Director of Statistical Services at the National Records of Scotland, said: “The latest figures show that last week there were 118 deaths where COVID-19 was mentioned on the death certificate. This is the same number of deaths as in the previous week.

“The number of deaths from all causes recorded in Scotland in this week was 1,245, which is 8 per cent more than the five year average.”