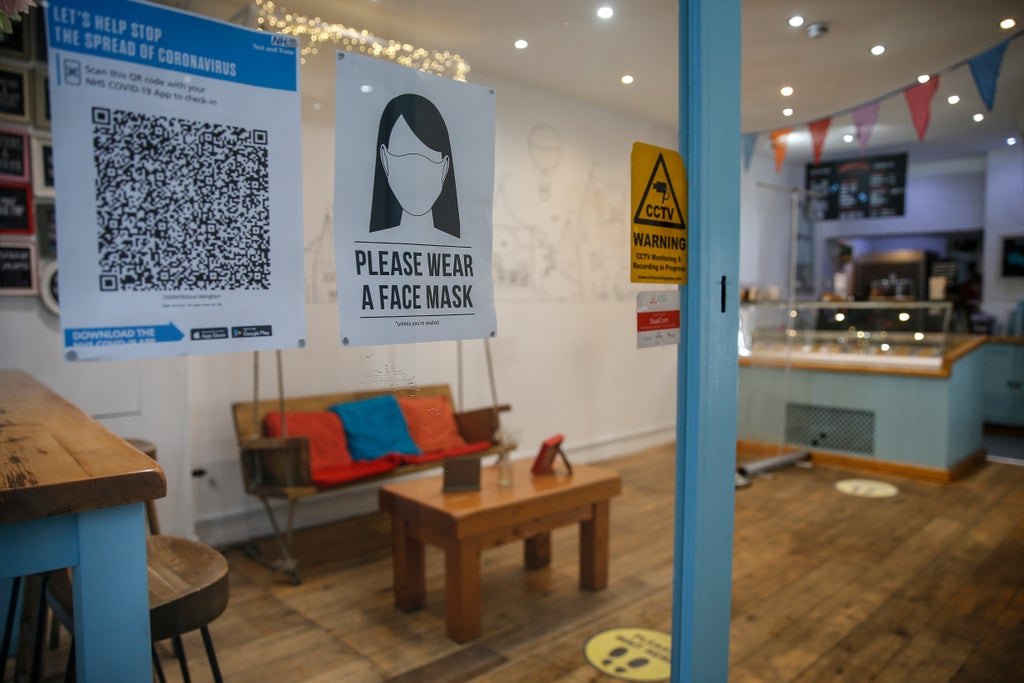 The end of England’s plan B Covid restrictions have been met with a mixture of concern and relief from business owners, commuters and shoppers.

Rules requiring masks to be worn on public transport and in indoor venues such as shops were lifted on Thursday, while Covid vaccine passes are no longer be mandatory in nightclubs.

Health secretary Sajid Javid said the country must “learn to live with Covid”.

But rail operators and supermarkets are continuing to ask customers to wear masks in a bid to prevent the spread of coronavirus as cases remain high.

And some shopkeepers told The Independent told they feared for their safety as they could no longer require customers to cover their faces.

Trushar Patel, the manager of a DIY and flower shop in Notting Hill, west London, said he would continue to ask customers to wear masks in his premises. But he said Thursday’s law change would make this difficult to enforce – especially in a time when business is relatively low.

“My view is simple, they should have kept the face masks for a while,” he said. “If you look at the cases at this moment it’s still over 100,000. When it was around 20,000 they were saying we should have restrictions but now it’s three times more and they don’t want any?”

But he added: “At the moment business is slow so if someone comes in and is anti-mask I don’t want to get into an interaction about it – I want business. I had a customer who didn’t wear a mask but she spent a lot of money, if I had asked her to wear a mask I may not have had that business.”

See also  The next manager of Manchester United has to decide the future of eight players: Samuel Luckhurst

Supermarket chains Sainsbury’s and Waitrose are among major retailers who have indicated they will continue to ask customers to wear masks in their shops.

Another shopkeeper, who runs a gift shop in Notting Hill, told The Independent he would follow suit. But he conceded he could not fight the “10 per cent” of people in his shop who don’t want to wear a mask.

Construction worker Martin Benson, speaking on his commute to a site in Notting Hill, said he would continue to wear his mask regardless of the rule change.

“I don’t think we should rush into it, to be honest,” he said.

“It’s always going to be confusing who knows what the right thing is to do – it’s a personal choice to wear a mask. I’m a 62-year-old man I’ve never seen anything like this before and may not see anything like it again so we need to make a decision to keep each other safe.”

But Meeri Tsukanova, a finance worker, welcomed the changes.

“It’s about time – that’s my thoughts on it,” she said. “I’ve been waiting for this. I think research is showing that the narrative that wearing a mask only to protect others is weakening so I think it’s high time they’re gone.

“It’s confusing and unnecessary that shops are mandating masks especially when you see teenagers masking up it’s completely unnecessary.”

However, college student Harsh Singh condemned the move by the government and said the new rules would cause confusion.

“I don’t think this is a good move. There are still many cases of Covid right now, restrictions shouldn’t be lifted right now,” Mr Singh said.

Covid passes to access large events and nightclubs were also part of the plan B measures which have now been scrapped.

Rekom UK, one of the country’s largest night-club owners has told The Independent it will not be using Covid passes in its venues in England but will continue to comply with legislation in Scotland and Wales.

The Premier League has announced that Covid passes will no longer be enforced as a condition to enter a match.

The league’s chief executive Richard Masters said: “Despite government restrictions easing, everyone still has a role to play in making sure people feel safe at our matches. We and our clubs urge supporters to continue to do all they can to follow public health guidance to minimize the risk of passing on Covid-19.”