The president of the Generalitat Carles Puigdemont has already left the German prison. Dozens of media were waiting for him at the gates of the Neumüster prison. Puigdemont has appreciated all the samples of “support” and “solidarity” received while he has been in jail.

Puigdemont He has demanded the freedom of all his companions who are still in prison and has considered that it is “a shame for Europe” that there are “political prisoners”.

On cause, he stated, “it is not only for the right to self-determination nor only an internal question, but it affects all citizens who worry about the risks of a soft democracy “ that, he has predicted, can end Europe.

The president has defended that “It is time to talk”, and has insisted that there is no excuse for the Spanish authorities not to want to negotiate with the institutions of Catalonia, he said. “We have asked for dialogue in recent years and we have only received a violent and repressive response. It’s time for politics “, has sentenced.

Upon leaving the prison, the president was received by a delegation of deputies from JxCat and ERC.

Shortly before your departure, the Schleswig-Holstein Prosecutor General’s Office had reported that Puigdemont had already posted the € 75,000 bail that the Territorial Court of that federated state imposed on him on Thursday to release him and decreed his “immediate” freedom.

The Catalan National Assembly (ANC) announced last night that it had made the transfer of 75,000 euros effective to pay the bail. “We have just paid the bail determined by the German justice of President Carles Puigdemont,” the ANC assured from its Twitter account, where it pointed out that its “solidarity fund” in support of sovereign prisoners “has already paid almost 4 million euros. euros in bonds “.

The ANC stated that “the Spanish State discovers the separation of powers” after the decision of the German court.

The entity also celebrated, in the same social network, that the Consellers dismissed in Belgium have been released without bail after giving a statement this Thursday: “The force of freedom prevails over injustice. Congratulations, councilors.”

Puigdemont plans to appear in press conference this Saturday morning from Berlin, according to sources from Junts per Catalunya.

The Schleswig-Holstein Territorial Court has ruled out the crime of rebellion in the process of extradition to Spain of Puigdemont and decided yesterday to release him on a bail of 75,000 euros while studying the delivery for embezzlement. 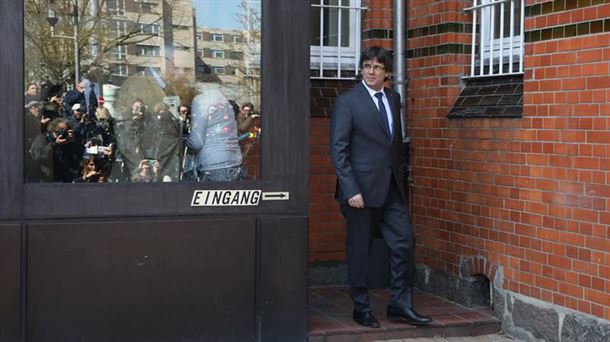 The Schleswig-Holstein Prosecutor General’s Office has no margin of action to present allegations or appeal against the decision of the Territorial Court.

The spokesperson for the Prosecutor’s Office, the prosecutor Wiebke Hoffelner, has explained that there is no legal margin to appeal the decision of the Hearing, which did not respond to his request.

In his opinion, since the crime of rebellion is inadmissible, the risk of escape is reduced, so that Puigdemont can be released from prison.

Puigdemont will not be able to leave Germany without authorization from the Prosecutor’s Office, he must appear every week before the Police and will have to communicate any change of residence within the country, as determined by the Hearing when agreeing to his conditional release.

For his part, the magistrate emeritus of the Supreme Court José Antonio Martín Pallín has stated that if there is “a certain logical rationality, good sense and serenity”, the normal thing would be that “the absurdity” does not occur that Puigdemont “was only tried for embezzlement” and the rest of the components of the dismissed Government accused were it for rebellion.

Speaking to Radio Euskadi, Martín Pallín referred to the decision of the Schleswig-Holstein Territorial Court.

Martín Pallín, who has indicated that days ago he himself anticipated what was going to happen, has affirmed that It was one thing to think that both prosecutors were “in contact” and another that “the German courts were not independent”.