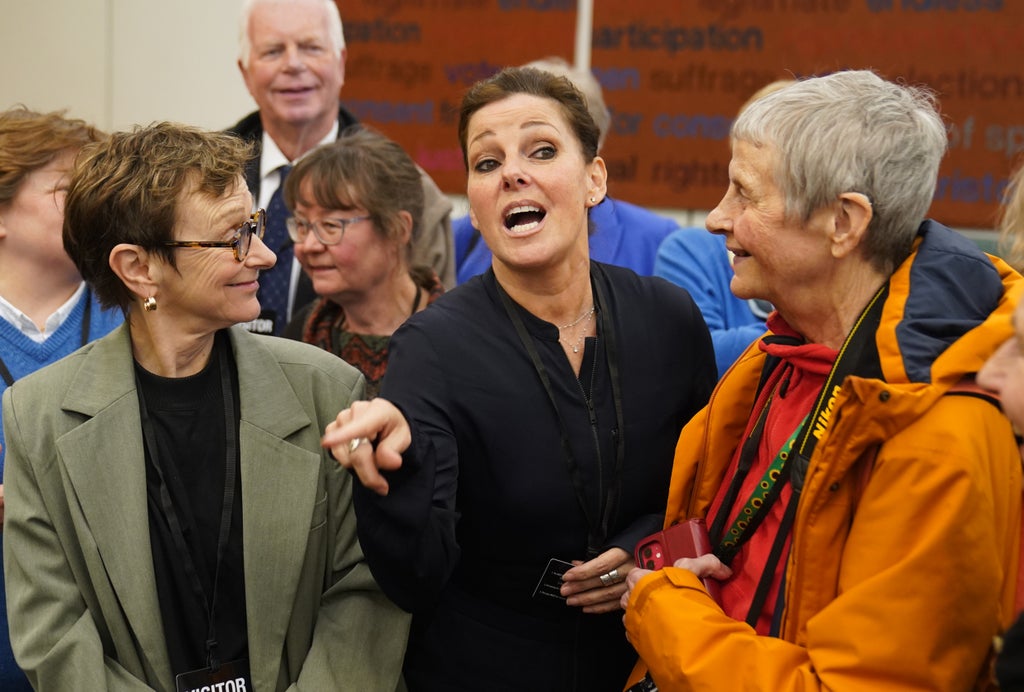 Campaigners have accused the care minister of failing to listen after she attended the tail end of a meeting where families of care home residents shared the “soul-destroying” separation they experienced during the pandemic.

Audible shock and gasps filled the room as relatives spoke of being unable to say goodbye to their elderly parents in their final hours, the humiliation of only being allowed window visits and how their loved ones had lost the ability to speak after being isolated for so long .

One campaigner said she feels “haunted” after being diagnosed with post-traumatic stress disorder when her father died and she could not visit.

Others said they are still beset by nonsensical rules almost two years on from the first lockdown, with the husband of a woman with early-onset dementia telling MPs he is not allowed to remove his mask, eat or drink or use the toilet when visiting her room.

Campaigners and MPs are calling for a new legal right which would enable people in health and care settings to maintain contact with at least one loved one providing essential support.

This would give people the right to unrestricted contact with a “care supporter” in a bid to make sure the isolation experienced by some in care during the pandemic is “never again” felt.

Six people told their stories at the emotional two-hour event in Westminster on Wednesday, which was attended by politicians from across the political spectrum.

Campaigners said it was “insulting” that care minister Gillian Keegan only attended for the final 20 minutes.

Ms Keegan did not arrive in time to hear the testimonies but repeatedly assured attendees “I completely get it” and said the Government is exploring options.

She also said legislation could take time and that the Government is currently looking at its guidance, which campaigners say is not protecting people because it is being ignored by some care homes.

Actress Ruthie Henshall, whose mother Gloria died in a care home in May 2021, broke down in tears after the meeting.

She said she feels “very, very upset and really frustrated” and that it was “absolutely no good whatsoever” for the minister to arrive near the end of the meeting.

She told the PA news agency: “She’s not listening.

“She’s been very, very quick to talk and to talk about what she can’t do and what she’s not allowed to do. She is not talking about what is possible to do.

“She’s not listening and I’m really quite devastated by this.

“I’m actually devastated by what happened when she walked in. It was like the compassion was sucked out of the room.”

She called on the minister to “do something”, adding: “She does have the power, and they can do it quickly, and if they don’t do it quickly then more and more people are going to die.”

The event was organized by the charity the Relatives & Residents Association, and the groups John’s Campaign and Rights for Residents.

It was chaired by Conservative MP Tracey Crouch and Labour’s Dan Carden.

Several MPs commented on the powerful testimonies, including Mr Carden who said there was “real shock” at some of the stories heard.

He told Ms Keegan: “My view is we’ve slept-walked into a position where families are left powerless over seeing their loved ones.

“I don’t think that’s what Parliament wants, I can’t believe it’s what the Government wants, and the current guidance that’s in place is not satisfactory…it’s a postcode lottery and it leaves the power in the hands of the individual establishment. ”

Among those sharing their stories was the author Wendy Mitchell, who was diagnosed with young onset dementia in 2014 aged 58.

She said she was told by a doctor: “It says you have dementia – what do you need a left hand for?” when she needed an operation on her wrist from her.

She was “stunned into silence” but her daughter Sarah, who had accompanied her to the appointment, was able to speak up on her behalf.

Ann Ablett, who also addressed MPs, said her mother Eileen would call her up to 30 times a day saying she needed help or was in pain when visits were restricted at her care home.

When visits restarted, they were “harrowing” and her mother would beg for her not to come because it was so painful to sit in her wheelchair.

The 57-year-old from Yorkshire said the care home ranged her an hour before her mother died last November, but she did not get there in time.

Sitting with her body “was the longest time I had been allowed to spend with her since she had entered the care home” 16 months earlier, she said.

Kate Meacock said she observed a “frightening” deterioration in her previously independent father Charles, 85, after he was admitted for four and a half weeks to a hospital with a “completely closed-door policy”.

She was unable to see her mother Caroline, 76, properly for an entire year between March 2020 and March 2021, who “shrieked in delight” when they were finally able to hold hands again at her care home.

The 52-year-old, who lives in London and Sussex, said: “We need to know those who mean the most to us will be allowed to be there for us, at a time when we are most vulnerable and frightened.

“The isolation both my parents have experienced has been horrific, their deterioration heart-breaking.”