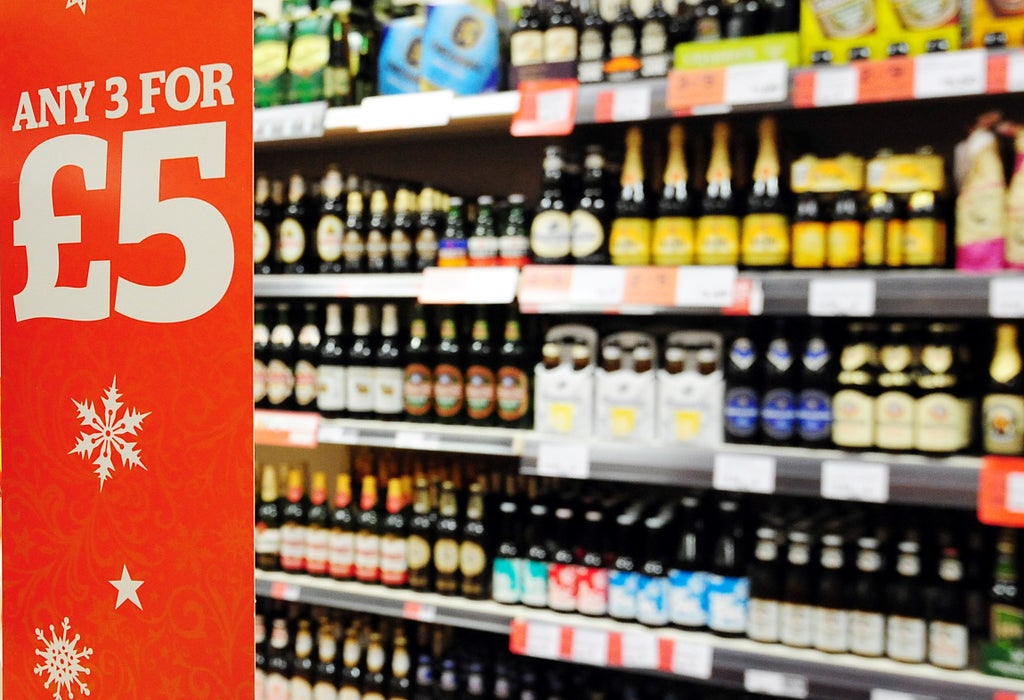 A recovering alcoholic who gave up drinking during the first lockdown is urging supermarkets to keep alcohol away from queues to minimize the chance of relapse and help reduce alcohol-related harms.

Experts have backed the call, saying the “simple step” of placing booze away from tills, where people queue, or in prominent end-of-aisle promotions would help the public make healthier choices.

It comes amid a jump in the number of high-risk drinkers, rising alcohol-related hospital admissions, and people spending more on alcohol from shops as they drink at home.

Matthew Penn, who describes himself as a recovering high-functioning alcoholic, stopped drinking in May 2020.

The 41-year-old, from Burton-on-Trent, Staffordshire runs an online support group for recovering alcoholics and survivors of childhood trauma called The Matt Penn Initiative, and has written a book about his recovery.

The father-of-two said one of the biggest obstacles to recovery was queuing along the alcohol isolate as he waited to pay for his shopping, feeling like a “ticking time bomb”.

He recalled “battling within myself to stay sober” on day 49 of his recovery as he queued next to bottles after his father died.

He told the PA news agency: “That one moment in a shopping queue can have such a major impact on people’s recovery or whether they relapse or not, and it’s such a simple thing.

“Every single person I speak to on my page says one of their biggest problems is going into shops. It can be so easily avoided.

“It’s like a tug of war in your mind that’s going on all the time.”

Mr Penn said having shoppers queue next to drinks shelves puts people with an alcohol problem in a “very dangerous position” and has launched a Change.org petition for shops to redirect queues away from alcohol isolates.

He called for shops to show more consideration, adding: “You’d think if you can cover up cigarettes then surely you could cover up alcohol. It shouldn’t be as encouraged as it is.”

Critics of the suggestion acknowledged the seriousness of alcohol addiction but said further restrictions would unfairly target moderate consumers and businesses.

Government data shows millions of Britons are engaging in hazardous drinking, with a jump in drinkers considered high risk.

Experts have said factors include the switch to drinking from home, trying to cope with pandemic-related uncertainty and forming new habits.

A report published last week revealed that spending on alcohol in UK supermarkets and off-licenses has more than doubled since 1987, to £27.1 billion in 2020, up from £10.7 billion.

There were almost 980,000 admissions in 2019/20 where the primary reason for hospital admission or a secondary diagnosis was linked to alcohol, 4% higher than in 2018/19.

Professor Adam Winstock, a consultant psychiatrist and addiction medicine specialist, said the call is a “very reasonable request” from retailers, who should “embrace the opportunity to encourage people to adopt healthier lifestyles”.

It would make purchasing an active choice rather than an “occupational byproduct of going to supermarket”, he added.

He said the parallel has been supermarkets removing sweets from checkouts so children do not “hassle” their parents for them.

He said: “The fact that that additional temptation will trigger people who are trying not to drink to purchase alcohol, I absolutely understand, and I think it would require only a little bit of effort for supermarkets to reorganize checkouts to reduce the visibility and temptation of alcoholic beverages near checkouts.”

Government-funded research has found that people buy more alcohol when it is placed in prominent positions, such as at the end of an aisle.

Dr Alison Giles, chief executive of the Institute of Alcohol Studies, said: “Strategically-placed alcohol in supermarkets is designed to increase purchasing and consumption, which subsequently leads to an increase in harm.

“To support those in recovery and reduce the cost of alcohol harm to society, a simple first step for supermarkets would be to move alcohol away from checkouts.”

Dr Jyotsna Vohra, director of policy and public affairs at the Royal Society for Public Health said the Government should incentivize retailers by considering business rate reductions where they show they are taking health seriously by improving layouts.

She said customers are “bombarded” by choice, finding it “hard to say no to unhealthy products, including alcohol”.

She added: “There has been some progress by supermarkets such as removing junk food from checkouts, but like many, we believe there is much more that can and must be done to support healthier choices in supermarkets.”

She said: “Retailers have an important role to play in not encouraging unsafe levels of drinking through their promotions and displays.

“However, system-wide interventions are needed so those drinking at high risk can get support as early as possible and before they reach a crisis point.”

The Portman Group, which receives funding from the drinks industry and has firms signed up to its code of practice, said it recognizes that harmful alcohol consumption is a serious issue.

Chief executive Matt Lambert continued: “However, we believe that further restrictions on alcohol sales, such as separate queues or cordoning off alcohol entirely, are disproportionate and would unfairly target moderate consumers and businesses.”

The British Retail Consortium said: “Retailers take their responsibility to the health of their customers very seriously and follow stringent rules on the sale of alcohol.”