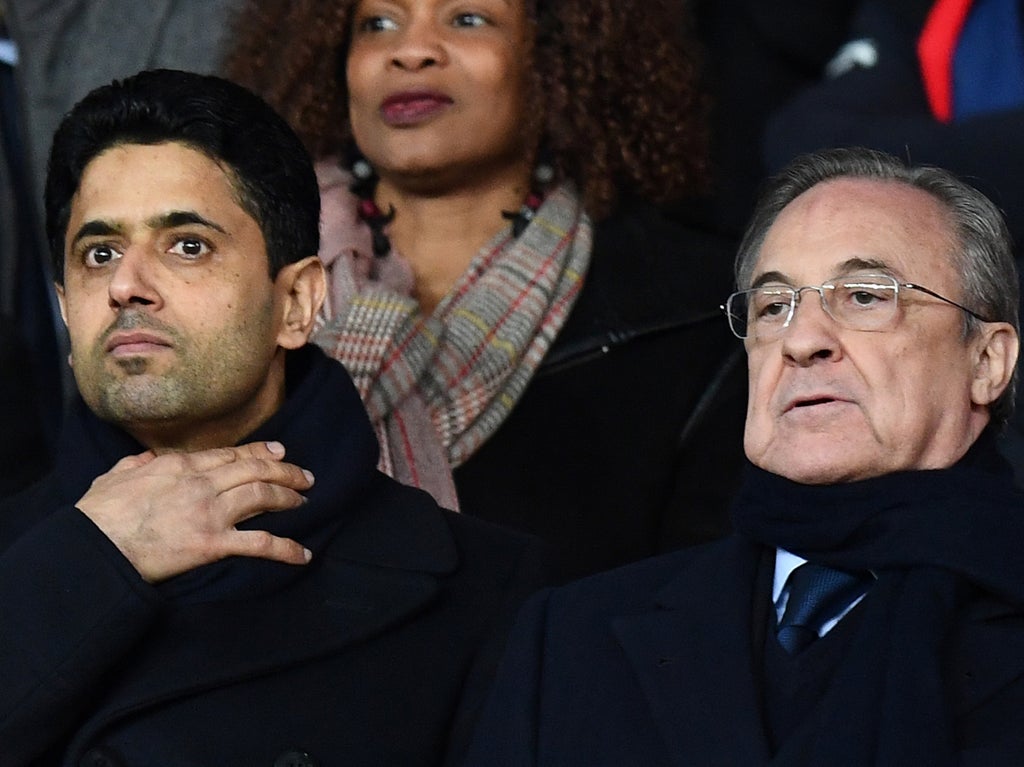 As Florentino Perez and Nasser Al-Khelaifi sit down for their customary dinner before tonight’s Champions League tie between Real Madrid and Paris Saint-Germain, they will have more to discuss than usual.

There is, most prominently, Kylian Mbappe’s pending move between the clubs. Perez will doubtless ask about Mbappe, but Al-Khelaifi might well inquire about Zinedine Zidane. There is a widespread expectation in the game that the French legend will be the next PSG manager, with many thinking it will be as early as this summer, when Paul Pogba will almost certainly arrive on a free.

All of this illustrates how there is arguably more crossover between Madrid and PSG than any two clubs in Europe, as well as a lot of shared and competing interests. Perez and Al-Khelaifi have a much better relationship than many would expect, and have shared advice on how they deal with the challenges of the modern game, but such a crossover is inevitable as they find themselves on either side of the most significant divide in elite football.

Madrid are the oldest of the old money, having asserted their status by winning those first five European Cups. PSG are the newest super club, and the latest entrant to that group who really run the game, having only been taken over by Qatar a decade ago. That will at least remain the case until Saudi Arabia’s Newcastle United start to display their power.

See also  Start date, when the draw is, and the wildcards to watch out for

We are long past the point, however, where beating a club like Madrid represents a necessary next step for PSG. Too much has changed in the game for such simplistic notions. Madrid’s long-time tormenter, Lionel Messi, playing in the Parc des Princes is testament to that. PSG have also reached the Champions League final more recently, even if they have yet to win it.

More relevantly, Madrid are the main driving force behind the Super League, an idea that was partly motivated by the old guard’s concerns about the power of state-owned clubs. PSG, meanwhile, proved staunch defenders of the status quo, with Al-Khelaifi greatly improving his influence within Uefa as a consequence. Many in the game see him as a future president of European football’s governing body, or Fifa.

The Qatari-owned club are privately adamant that they would never have gone in with the Super League, because it would go against the point of their entire project. They would call that building relationships in France and Europe, even if others would describe it as sportswashing.

Either way, the net effect is that PSG have a very strong relationship with the rest of the French league. They are very much in concert, despite what outsiders would perceive as the obvious negatives of one club dominating most seasons. Many other clubs are grateful for the “buzz” and commercial profile that PSG bring.

Madrid, by contrast, have virtually no relationship with the Spanish league. Perez and La Liga president Javier Tebas are said to “disappoint each other”. They barely speak.

So, football’s ultimate establishment club have become the great outsiders. Madrid are now the disruptors, along with their great rivals at Barcelona. PSG are no longer the upstarts upending the game. They’re at the center of the old institutions.

That has led to another irony that frames this game.

It would at one point have been billed as a battle between the two most powerful dressing rooms in football; the two clubs where the players are most indulged. no more That only applies to one side, and overwhelmingly so.

Madrid’s new position, and the very fact they can’t afford the prime stars that PSG can, has meant they have to do business another way. They have had to create a leaner and more efficient squad.

It is ironically one much more suited to how Pochettino manages than at any point when Madrid courted him between 2016 and 2019. Those Throughout years, many figures at Tottenham and beyond advised the Argentine not to go to the Bernabeu because the dressing room was far too powerful.

Now, most of the huge personalities have gone, with that in itself diluting the influence of those left. Marcelo, Luka Modric and Karim Benzema remain, but they aren’t seen as “political” as old teammates like Cristiano Ronaldo and Sergio Ramos. The centre-half is instead asserting his influence from him at PSG, if mostly from off the pitch.

There are still many senior professionals there, but the shift to something younger is unmistakable. The squad is seen as more of a “group” with much less media noise. Many quip how the only politician left is Perez himself.

Some of this is symbolized in how they shifted focus from what would have been a real vanity signing in Neymar, to going all in on the 23-year-old Mbappe. The fact it will be on a free transfer makes it all the more rejuvenating. They’re getting the future of the club – and of the game – for no fee, with more resources then reserved for Erling Haaland, too. This is how Madrid play it now. It is more than bombastic.

It’s still a hugely ambitious plan – first reported by The Independent last year – and, if successful, Madrid will very suddenly have a much more devastating and attractive-looking attack.

Neymar will be left as the king of the PSG dressing room, but ticking into his thirties and with his talent left largely unfulfilled. The great twist he has to face up to is that it is probably the very influence of players like Neymar that means they can’t fulfill their potential.

Pochettino isn’t that enamored with the Brazilian, and is just the latest manager to find it almost impossible to impose any kind of tactical idea on the team. You can only really compromise around the stars’ self-indulgent insistence on doing as they please. This is further complicated by the different cliques within the dressing room, which are primarily based around culture and language.

Pochettino would have no issue with a Spanish-speaking core leading the dressing room, so long as they are driven by the more collectively-minded voices like Angel Di Maria and Keylor Navas, but he can’t put either of them in the best XI because of political influence.

This is another problem PSG managers have repeatedly faced. There are so many different layers of authority at PSG that any player who feels aggrieved can just complain to someone in power who favors them. “It doesn’t exactly promote a team culture,” one source complains.

Pochettino has to fit some kind of structure around that, which is basically seven players willing to run and work around the three stars.

And yet, partly as a consequence of all this, it’s difficult not to think PSG should be favorites because of their superior individual quality. Messi and Neymar can still produce that moment. Mbappe can divert the path of the whole tie as well as his own career.

For all Madrid’s shift towards youth, it’s not like Carlo Ancelotti makes them a model modern team. Their vulnerabilities in a modest Spanish league indicate that. That all brings a pressure of its own, too, but perhaps not on the many people expect.

While PSG undeniably want Zidane, and it feels like Pochettino will be moved on at some point, it may not be that soon.

A few connected figures believe that the French club will make a point of keeping Pochettino this summer, purely so it doesn’t look like they are bullied into losing him; to assert that they are at the top of the food chain.

It was similar with insisting on keeping Mbappe last summer, despite the fact he will be able to leave on a free. It isn’t just about business sense for the club. It’s about perception. That’s what comes with such a position.

That is why it might actually be sporting director Leonardo who is under the most pressure if they lose this tie.

He has put this squad together. He may be responsible for letting Mbappe leave.

This very tie could give Perez and Al-Khelaifi even more to discuss.