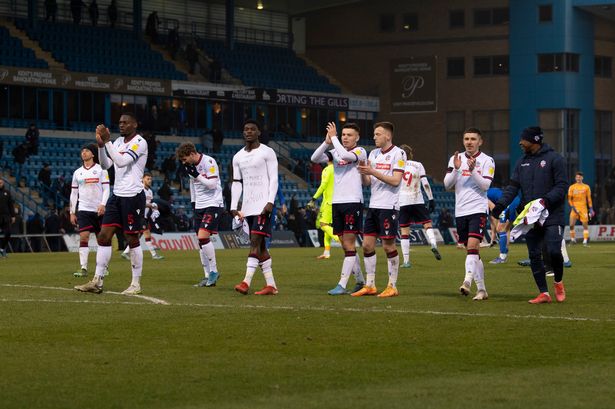 The Bolton Wanderers squad is poised to be augmented in the summer transfer window as Ian Evatt prepares for his third season in charge of the Whites.

Wanderers are currently 11th in League One and nine points from the play-offs as things stand with seven games of their season remaining.

Though Bolton are outsiders in the race for the top six, Wanderers are still in the hunt for the play-offs, though it will probably take a near flawless record to occur between now and the end of April for that to become a reality.

Planning is under way for next season at Wanderers, whether the club is in League One or possibly the Championship, to augment the squad for the 2022/23 season, though perhaps quality rather than quantity of signings could be the order of the day due to the strong foundations now in place with much of the squad under contract.

As ever, the squad is anticipated to change with comings and goings and here, we look at every permanent Bolton first team player’s chances of them being at Wanderers by the start of next season at the end of July.

Loan trio James Trafford, Xavier Amaechi and Marlon Fossey are all under contract at their parent clubs Manchester City, Hamburg and Fulham, and time will tell if a return to Wanderers for next season happens or not.

Has not featured since early January since Trafford’s arrival in the January transfer window. Wanderers would like Trafford back for next season and Dixon is under contract until 2023, and it remains to be seen if he would want to stay and fight for his place if a new goalkeeper comes in the summer or would perhaps seek game time elsewhere .

Bolton’s vice-captain is a consistent, reliable, quality and versatile and earlier this season signed fresh terms until the summer of 2024, so naturally should be at Wanderers next season and beyond.

Influential skipper and defender rated by his manager as the best in League One and that are few better outside of the Premier League. Contract runs until 2023 and talks are due to take place in earnest over the summer to extend Santos’ time at the club. The player is happy at Wanderers and it would be a huge boost if he were to commit his long-term future to the club.

If not, Wanderers could cash in on the defender if other teams come in for him, but he would not come cheap for any potential suitors and any deal would be on Bolton’s terms.

Joined Wanderers last summer and signed a three-year deal until the summer of 2024 and has been a near ever present at the back this campaign and would be expected to be the same next season.

Signed a two-year deal after arriving last summer and has been solid when called upon after joining from Plymouth Argyle. No reason to suggest he would not be apart of the squad next season.

Veteran defender signed a fresh one-year deal last summer which expires at the end of June. He has been down the pecking order in defense this campaign and turned 36 in January. If another deal is offered, then it would surely only be a further one-year option, though there is the possibility that Baptiste could leave for new pastures.

Currently out on loan at Barnet and is anticipated to leave Wanderers this summer, with the option to make his switch to the Bees permanent.

Defender has had limited time out on the pitch since February 2020 owing to a dreadful run of insults. He is currently out on loan at Southport and remains to be seen if he has a future at Wanderers, with his contract up this summer.

Senior has had three loan spells this season and is now back at Bolton for the remainder of the campaign. He could be at Wanderers next season or back out on loan somewhere to pick up more experience of men’s football. He could benefit too from the club’s upcoming new under-23s or B team set-up, whichever form it takes.

Following a successful loan spell last season, joined Bolton on a three-year deal last summer and defend should be a Wanderers player next campaign.

Having come back from a loan spell at Dagenham & Redbridge last season, you have deputized on both the right and left flanks this campaign when required. He is out of contract this summer and seems unlikely to start ahead of John, but he could provide a decent back-up on the left flank next season if offered fresh terms.

January signing from Rochdale has contract until the summer of 2025 and will undoubtedly be a key part of the midfield next season.

Like fellow January signing Morley, midfielder is under a long term contract after joining recently and will be a big part of Wanderers next season.

Signing last summer from Newport County is under contract until the summer of 2023 and is expected to return to action in pre-season ahead of the new campaign and hit the ground running in 2022/23.

Holding midfielder’s contract has been extended until the summer of 2023 and is a regular starter in that role and would play a key part in next season.

Influential player is having game time managed to get the best out of him but is the best Wanderers have in the number 10 role and is key, despite now being 33 and will play a big part next campaign, with his deal running out in the summer of 2023.

Midfielder has played just once this season and has had terrible luck with injuries. He is unlikely to play again this campaign and, owing to being down the pecking order in midfield and out of contract this summer, he may have played his last game for Wanderers.

A young player who is very highly regarded by Wanderers and Evatt who has a deal until the summer of 2023. He has not had as many first team minutes this season compared to the previous campaign but would still be anticipated to be at Wanderers next season, though if game time is hard to come by in the first team, then time could be spent in the club’s new under-23s/B team set-up, or possibly even a loan to help grant him more experience of men’s football.

Northern Ireland international has made a huge impact since arriving in January on a long-term deal and will be key in leading the line as Wanderers aim for promotion back to the Championship, whether it is this season or next.

Iceland international arrived in January and is under contract for next season and it will be good to see what he can do with a full pre-season under his belt.

The club’s top scorer and arguably player of the season will, along with Santos, be interesting to see what happens to over the summer. The attacker is under contract at Bolton until the summer of 2024 and will undoubtedly attract interest with his form in front of goal. But Bolton hold the cards in any negotiation and are not under any pressure to sell due to the club’s financial stablility and Afolayan being under contract for another two years.

Like Santos, if Afolayan does depart, then it will be on Wanderers’ terms and will not be cheap for any potential suitors.

Striker has been in great form in front of goal of late which has culminated in a call-up for Sierra Leone. He is under contract until the summer of 2023 and will be seeking to continue recent form into next season.

January transfer window signing from Rotherham United has had only a few starts so far, but has impressed when given the chance, mostly with substitute appearances. He will be seeking to become a more regular starter for the remainder of this campaign and next season.

A player with Premier League and Championship experience who has recently returned from injury and whose versatility upfront is a useful addition to have in the final third. He is under contract until 2023 and will undergo a pre-season this summer, unlike last year when he was still searching for a new club right up to the start of the season.

Winger has proven useful and versatile with ability to play in defense at right back or right wing-back and is under contract until the summer of 2023.

A player whose deal runs until the summer of 2023 and is currently out on loan at Scottish side Queen’s Park. A big season is coming up to see whether he can force his way into the first team again, have to head out on loan again, or spend time with the new under-23s or B team to help develop his game further and give himself a better chance of being involved regularly for Wanderers.

A player who played a big part in Bolton’s promotion out of League Two, but has struggled for game time this season at Wanderers and moved to Bradford City on loan in January. Contract is up this summer and is way down the pecking order in the final third, so a release this summer would not be a surprise to see.