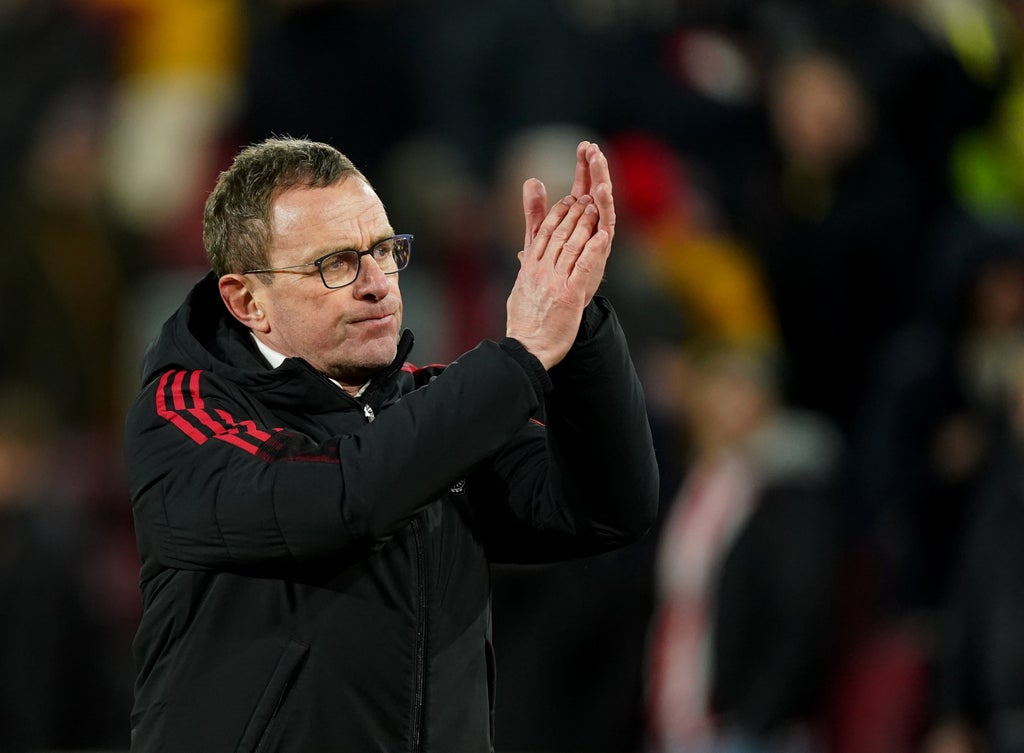 Ralf Rangnick has told any players looking to leave Manchester United it is in their interests to perform well for the remainder of the season.

And the German, who has been appointed as interim manager until the end of the campaign, admits he would be happy if the knock-on effect of that is finishing fourth in the Premier League.

Paul Pogba Jesse Lingard Edinson Cavani and Juan Mata are all in the final months of their contracts and could move on in the summer.

Rangnick, who will continue as a consultant at Old Trafford when his coaching stint ends, is not concerning himself with the long-term future yet but points out those players have a lot to play for.

He said: “In the end, it is a question of what do the players want and what the club sees, but these are not interesting topics and issues for us right now.

“Right now it is to get the best out of the season in the interests of the club, the fans, the current coaching staff and these players.

“Even if they want to leave at the end of the season, the chances to get a new offer from any club – including Manchester United – are much higher and bigger if they do well and play well and we are being successful.”

For Rangnick, success would be securing Champions League football for another season. United’s hopes of winning the Premier League have long since faded while they were eliminated from the FA Cup by Middlesbrough last week.

They are still involved in the Champions League this term but Rangnick is not setting bold ambitions beyond qualifying for it again.

“To be honest, everybody inside the club, including myself, would be happy if we would finish fourth at the end of the season,” Rangnick said.

“This is my full focus with my coaching staff – getting the best out of this season.”

United are fourth ahead of Tuesday’s trip to bottom side Burnley. They have lost just one Premier League game in eight since Rangnick took charge and the temporary boss is in no doubt performances are improving.

He said: “Overall I think the team has developed, taken the next steps and this could be seen against Middlesbrough.

“I am absolutely convinced we are playing at a higher level than a couple of weeks ago.”

Rangnick has also had a difficult time off the field with questions about his authority after apparent disputes with Anthony Martial and Lingard.

Both players have made comments on social media in recent weeks that have contradicted something said by Rangnick in public.

Rangnick admits he is not a fan of social media but now wants to draw a line under the matters.

“My generation never grew up with those things,” he said. “I can even remember a time when there were no mobile phones or internet.

“For me it is always better to communicate directly but it is time now to look ahead. I know in both cases what I said to the players and what happened. For me there is no reason to discuss this anymore.”

Rangnick was also criticized last week for allowing Cavani to miss the Middlesbrough game as a result of a late return from international duty. He points out this was planned in advance before the club suspended Mason Greenwood.

Rangnick said: “Edinson asked me two days after the West Ham game if he could stay one or two days longer in Uruguay.

“At the time we didn’t know anything about Mason Greenwood. This only came up a week later. That is why we allowed him to spend one or two more days longer in Uruguay and come back for the game against Burnley.”