The late, great, Walter Smith was not often a man lost for words – whether that be inspiring his players in the dressing room or giving Chick Young the sharp side of his tongue after an ill-advised question.

It’s also fair to say that the man who won 10 league titles as Rangers manager and took a side featuring Filip Sebo and Kirk Broadfoot to the 2008 UEFA Cup final held a belief his side could beat anyone.

Those traits, combined with a deep knowledge of the game, are probably why Ibrox boss Graeme Souness sent his assistant to Serbia to scout Red Star ahead of a European Cup meeting between the two sides in 1991.

Smith duly went off to the Marakana to compile his report before returning to Scotland for to present his findings.

By some accounts a baffled Souness followed up by asking for more detail, with Smith elaborating with the words “Graeme, we’re Absolutely f****d”.

The story is almost certainly embellished but in the days before Wyscout, with the secretive Slobodan Milosevic regime still holding sway in Yugoslavia the Scottish contingent wouldn’t have had much of an idea of ​​what they were about to face.

What Smith would have been greeted with when he was dispatched to compile his report was a team at the peak of its powers, which would go on to score 88 goals in 34 games to win the Yugoslav top flight.

A team which would, by the following summer, be European champion.

In the modern day players of that talent would be plucked from Serbian football before their 21st birthdays, but back then there were restrictions on leaving Yugoslavia so, despite the absence of Savicevic, it was a formidable foe who awaited in front of 82,000 at the Marakana .

Had the bearpit atmosphere not disabused Rangers of the notion of an easy night the opening seconds surely did, with Ilja Najdoski booked inside the first minute for a brutal tackle on Mo Johnston. 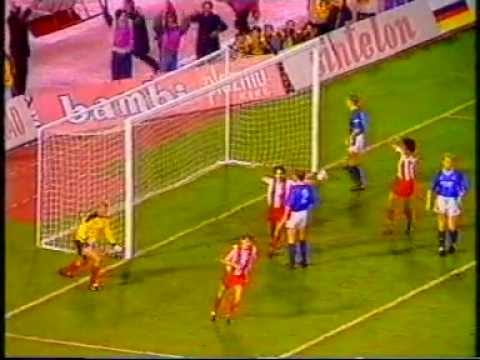 The hosts were not some Balkan hatchet men though. In ‘Behind The Curtain’, his book on Eastern European football, the writer Jonathan Wilson describes that Red Star team as combining “technical brilliance, fluidity, a capacity for moments of staggering flair, supreme organisation, cynicism”. Smith was more succinct, it must be said.

The cynicism was on show in that first minute, and not long after the Yugoslav champions brought the rest to bear.

A long ball from Rangers goalkeeper Chris Woods targeted Johnston but it was too high and Red Star gained possession.

Slowly they began to stroke the ball about, with Archie Macpherson noting that Prosinecki was being forced deep to get involved in the play.

Suddenly Vlada Stosic wriggled between two blue shirts and found Prosinecki, now in a more advanced position, with an outside of the boot pass which took another Rangers man out of the game.

The creative midfielder found Slobodan Marovic out on the right, came across to receive it again, held off Ian Ferguson and sent a pinpoint pass out to Dusko Radinovic.

He looked to cross and John Brown, straining to get back into position, turned the ball into his own net. 1-0 after eight minutes, Rangers sliced ​​apart with surgical precision. “Yeah, we’re f*****d”, Souness might have thought.

Lining up in what was at that point a standard British football 4-4-2, Rangers seemed to have no answer for the movement and skill of Prosinecki.

Time and time again the blonde playmaker would drop deep and, faced with a bank of four midfielders, simply send a raking pass behind the full-backs. Woods was called into action in an almost identical move to the first goal, getting down at the feet of Dragosa Binic to deny what looked a certain goal.

Prosinecki himself fired just wide from distance. Pancev shot at Woods. Radinovic sat a howitzer screaming past the post. A mazy Pancev run was halted by Richard Gough. On commentary, a typically understated Macpherson acknowledged “we’re watching a quality European side”.

After Pancev fluffled a free header Smith could be seen gesticulating furiously on the sideline as the Scottish champions struggled to get a kick.

Thanks to a stunning save from Woods following another brilliant Red Star move, Rangers somehow went into the break only 1-0 down but, as Macpherson acknowledged, it had been a mauling.

Whether Souness and Smith put a rocket up their players at half-time or not, there was little change in the second half. Prosinecki made it two with a free-kick – albeit it one Woods might have done better with – and Red Star killed the tie with 15 minutes to play.

Rangers, looking for the vital away goal that would keep them in the hunt at Ibrox, saw a move break down on the edge of the Yugoslav box and the hosts sprung the trap.

Two quick passes sent Pancev scampering over the halfway line, and a clever feint brought him space to face up the defenders.

The striker spotted Binic on the far side and scooped a ball out to him before making a beeline for the box. The Rangers defense were static, Binic returned the favor and Pancev swept home.

Souness felt on Ally McCoist for Peter Hiustra but, as the legendary striker would admit in 2007, the tie was done.

He recalled: “Red Star were real quality, and went on to win the tournament that season. Guys like Pancev, Jugovic and Prosinecki were all in their prime and they gave us a going over.

“We were fortunate to get away with three, but the tie was more or less over then.”

A half empty Ibrox for the second leg suggested the fans knew it too but Rangers salvaged some pride with a 1-1 draw, McCoist equalizing with a towering header – yes, really – after Pancev had volleyed Red Star in front.

The Yugoslav side would go on to affirm their credentials with a 6-0 aggregate win over Dynamo Dresden in the next round, before one of the all-time great semi-final ties against Bayern Munich.

A 2-1 win in Munich featured one of the best counter-attacking goals you’ll ever see but it took a 90th minute own goal to secure a 2-2 draw back at the Marakana and a place in the final.

There, in what is widely considered one of the worst European Cup finals of all time, Red Star scored all their penalties after a 0-0 draw.

It proved to be the last stand of Yugoslav football – within a month Slovenia had declared independence and the country would descend into a bloody civil war.

That Red Star side featured not only Serbs but Prosinecki, a Croat, Bosnian Refik Sabanadzevic, Montenegrins Marovic and Savicevic, and a pair of Macedonians in Pancev and Nakdovski. Any hope their triumph would spark a moment of national unity proved ill-founded though, with the war featuring some of the most horrific crimes on European soil since World War II.

Piece by piece that team was broken up, and Red Star haven’t been anything like the same force since.

A rematch in 2007 saw Rangers take a 1-0 aggregate win and this tie will be just the third time the Serbs have played a pair of continental knockout matches since that European Cup triumph.

The scouting report Gio van Bronckhorst receives will have been extensive, detailed and, crucially, probably free of fearful expletives.