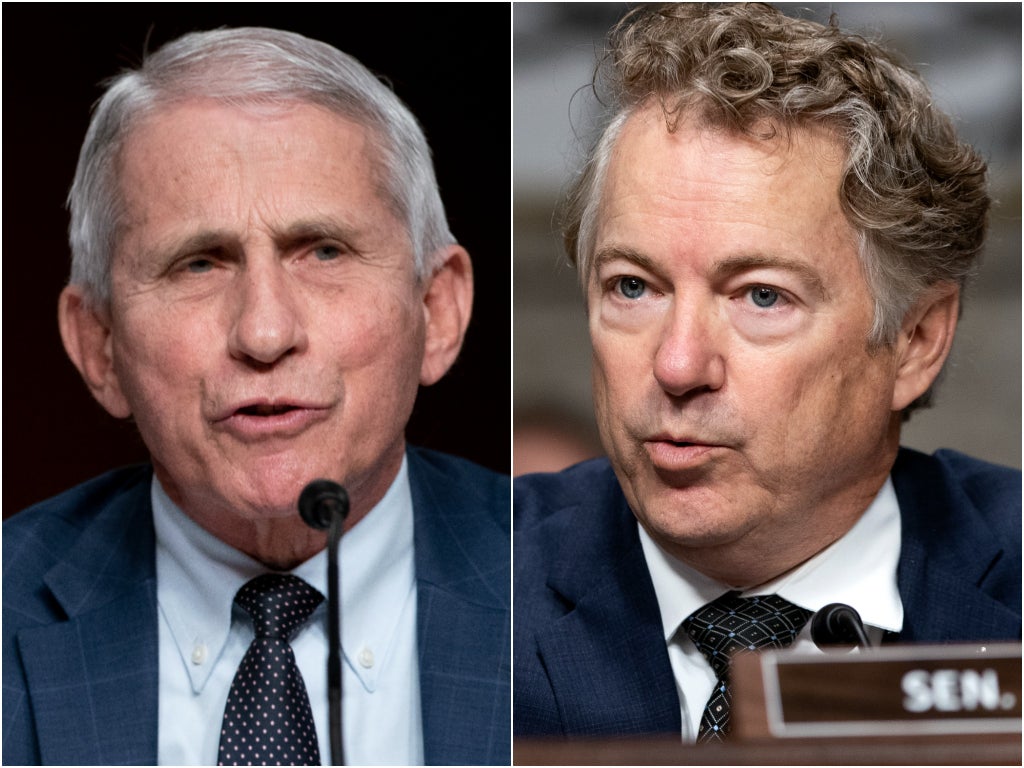 Kentucky Republican Senator Rand Paul has said he plans to subpoena Dr Anthony Fauci if the Republicans take control of the Senate after this autumn’s midterm elections and he becomes a committee chairman.

Dr Paul is likely to become chairman of the Senate Health Committee if the GOP manages to win control of the 50-50 chamber, because the current top Republican on the committee, North Carolina Senator Richard Burr, is retiring.

“If we win in November, if I’m chairman of a committee, if I have subpoena power, we’ll go after every one of [Dr Fauci’s] records,” Dr Paul told conservative podcast host Lisa Boothe. “We’ll have an investigator go through this piece-by-piece because we don’t need this to happen again.”

Dr Paul is a libertarian and an ophthalmologist – an eye and vision specialist. He has clashed with Dr Fauci, the director of the National Institute of Allergy and Infectious Diseases, on several occasions during congressional hearings, arguing about masks, vaccinations, and where and how the coronavirus began.

The Kentucky senator has claimed several times that Dr Fauci and the National Institutes of Health helped a virology lab in Wuhan, China with funding and that the lab then created a supervirus that could infect humans.

Dr Paul has pushed Dr Fauci on the issue, promoting the theory that Covid-19 was created in the lab and was then deliberately or accidentally released, despite scant evidence for any of Dr Paul’s claims.

Some evidence has emerged suggesting that the virus could have come from a lab leak because of a failure in adhering to safety protocols, with other experts saying the virus came from nature.

China has been rejecting attempts to investigate the origins of the virus, so its true beginnings may remain unknown.

“What happens when he gets out and accuses me of things that are completely untrue, all of a sudden that kindles the crazies out there, and I have threats upon my life, harassment of my family, and my children will have seen phone calls because people are lying about me,” Dr. Fauci said.

“This happens all the time. You personally attack me, with absolutely not a shred of evidence of anything you say. So I would like to make something clear to the committee: you’re doing this for political reasons,” Dr Fauci told Dr Paul.

Two years into the Covid-19 pandemic, the origin of the virus still tormenting the world remains shrouded in mystery.

Most scientists believe it emerged in the wild and jumped from bats to humans, either directly or through another animal, while others theorise that it did escape from a lab.

A growing chorus of scientists is trying to keep the focus on what they regard as the more plausible “zoonotic”, or animal-to-human, theory, in the hope that what’s learned will help humankind fend off new viruses and variants.

“The lab-leak scenario gets a lot of attention, you know, on places like Twitter”, but “there’s no evidence that this virus was in a lab”, said University of Utah scientist Stephen Goldstein, who with 20 others wrote an article in the journal Cell in August laying out the evidence for animal origin of Covid-19.

Michael Worobey, an evolutionary biologist at the University of Arizona who contributed to the article, said he always thought zoonotic transmission was more likely than a lab leak but had signed a letter with other scientists last spring saying both theories were viable. Since then, he said, his own and others’ research on him has made him even more confident about the animal hypothesis, which is “just way more supported by the data”.

“The lab leak idea is almost certainly a huge distraction that’s taking focus away from what actually happened,” he said.

Some supporters of the lab-leak hypothesis have theorized that researchers were accidentally exposed because of inadequate safety practices while working with samples from the wild, or perhaps after creating the virus in the laboratory. US intelligence officials have rejected suspicions China developed the virus as a bioweapon.

The continuing search for answers has inflamed tensions between the US and China, which has accused the US of making it the scapegoat for the disaster.