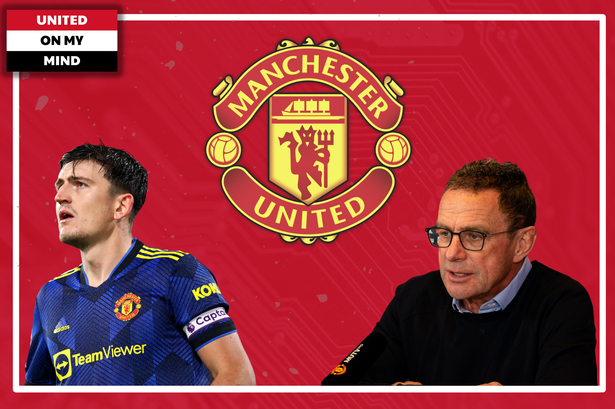 Manchester United’s 2-0 win over Brighton brought about some much-needed respite for interim manager Ralf Rangnick and his under-fire team, with Cristiano Ronaldo and Bruno Fernandes’ goals helping to restore some feel-good factor at Old Trafford.

Harry Maguire was one of the players who came in for the majority of criticism in the wake of Saturday’s 1-1 draw with Southampton and the last few weeks have arguably been his darkest period as a United player after a series of underwhelming displays.

Rangnick did little to aid Maguire’s cause with his pre-match assessment of the 28-year-old tending to thrive in a back three, as opposed to the back four United have typically played in under a number of different regimes, even if there have been occasional switches to a defensive trio.

Despite the pressure to drop Maguire, interim manager, Ralf Rangnick, came out to defend his captain in his pre-match press conference for the match against Brighton, admitting that while he needs to improve, he won’t strip him off the armband.

“He’s a player who has to develop, get better, like all the other players,” he said.

“The way that we are playing now is new also to him because in the English national team he was used to playing in a back three and here at Manchester United, in most cases a back four, but still not being as proactive, not with that kind of rest defense always being on the front foot when we are trying to defend.

“This is something also new to him and it will also take some time for him to get used to that, to get adjusted to that.”

It’s true that Maguire has often played in a back three for England and shined in that system but he has also featured in a back four internationally too. At Euro 2020, he was superb at the back and people expected him to take that form into this campaign.

While Rangnick is usually spot-on in his assessment of individual United players, those pre-match comments felt like excuse-making for a defender who should be taking on more responsibility and acting as a leader to those struggling around him.

Aside from United having always employed a back-four system, Maguire was accustomed to the demands of the setup and his particular role within it while at Leicester City. And his performances there under Brendan Rodgers convinced United to shell out a significant sum for a centre-half in the first place.

The idea that Maguire was somehow suffering from a formation did not appeal to fans seeking a response from Maguire.

Players like Luke Shaw have increasingly come under scrutiny for their roles in United’s recent poor form but a lack of positional sense from a left-back is something a left-sided central defensive partner should be identifying and helping rectify as much as the manager.

Signed for £80m from Leicester City in the summer of 2019, it has felt like the pricetag has weighed heavy on Maguire ever since his arrival at United and becoming captain has only added to that pressure.

There have been calls for Raphael Varane to be partnered with Victor Lindelof as United seek to wrestle back some defensive control after a series of leaky performances that have seen them drop points from winning positions with Maguire at the heart of the backline.

But Maguire’s response in the win over Brighton suggests a corner may now begin to be turned ahead of a crunch run of fixtures for Rangnick and his side.

While United were not exactly watertight defensively, a first clean sheet since the 1-0 win over West Ham in January was secured thanks to a valiant effort from the defensive unit, combined with some brilliant goalkeeping once more from David de Gea.

Maguire produced a series of headed clearances and at times when Brighton were in the ascendancy gave United better protection and cajoled the group as pressure mounted in the first half.

Rangnick’s attempt to explain his loss of form did little to convince people of Maguire’s waning powers but, on this evidence, he still has a crucial role to play in United’s bid to secure a top-four finish.

What did you think of Maguire’s performance against Brighton? Follow our United On My Mind writer omar garrick on Twitter to get involved in the discussion and give us your thoughts on the matter in the comments section below.