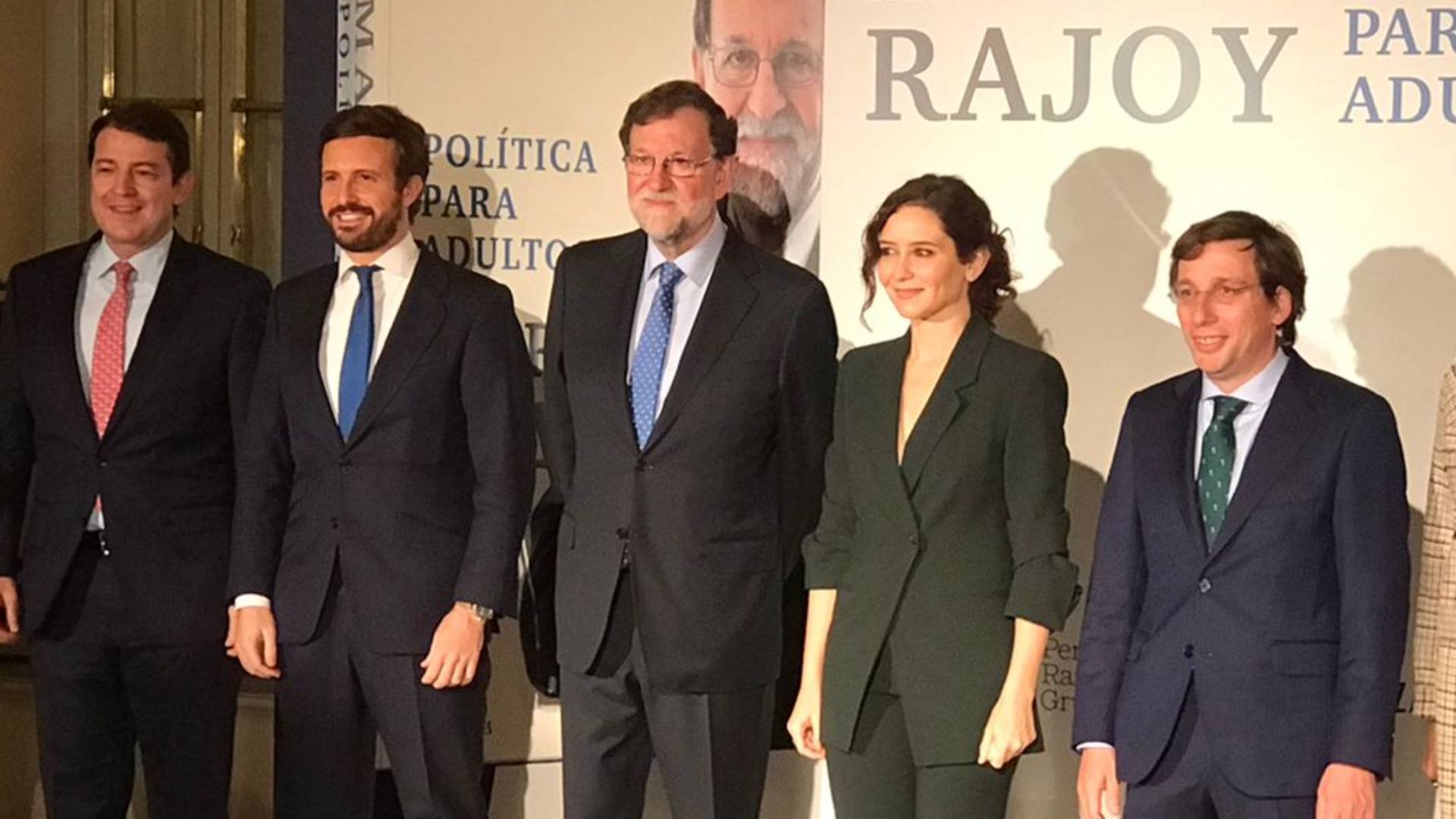 The former president of the Marian Government Rajoy has managed to ‘unite’ through a photograph to the leader of the PP, Pablo Casado, and the president of the Community of Madrid, Isabel Díaz Ayuso, after more than a month without being seen together in public and in a context in which the relations between the two leaders do not go through his best moment in the middle of the internal struggle for the Madrid PP congress.

The long-awaited meeting between Casado and Ayuso has been captured in a posed with former president Rajoy placed between them, within the framework of the presentation of his new book ‘Politics for adults’, which took place at the Casino de Madrid. Sources from the Ayuso environment to RTVE have indicated that the positions in the photo are established by the organization’s protocol, thus reducing the importance of the place where each of the leaders has been located.

Rajoy has taken advantage of his intervention to thank “in a very special way” his colleagues from the PP for their presence, especially Casado, of whom he has said “must soon assume the presidency of the Government for the good of all”; and later to Ayuso, of whom he has highlighted “his courage” and has lamented “the absurd criticism on the part of the left.” “I am very grateful because he is here today and he is also there”, Said the former president in reference to the Madrid leader.

Previously, the three leaders have posed for the cameras in a family photo, accompanied among others by the mayor of Madrid and the party’s national spokesman, José Luis Martínez Almeida, the only one who has spoken to the press upon arrival to ensure that the PP “is united” and justify that the meeting between Casado and Ayuso has been delayed so much in time due to “scheduling problems.” “Here is the proof that there is no problem that they coincide,” he insisted when faced with questions from journalists.

This reunion between Ayuso and Casado occurs after more than a month without being seen together in public, in full internal struggle for the PP congress in Madrid, which is scheduled for the second quarter of 2022, although the president Madrilenian has repeatedly defended her desire to celebrate it as soon as possible. The last time they met was on October 19, when they visited the facilities of the new IE Tower Campus, an act that was also attended by the mayor of Madrid, the third figure in contention in the internal war that the party is experiencing for control of the Madrid PP.

Married and Ayuso have talked for a few minutes

After the photo, Casado and Ayuso have moved aside and have had a brief conversation of just over a minute. The cameras have been able to capture this gesture of relaxation, although in a colder environment than usual; subsequently, both leaders have left the photocall to go to the room where the event was to be held. There they have been sitting in the front row, separated by Rajoy’s wife, Elvira Fernández

Sources from the national leadership of the PP have indicated to RTVE that in said conversation both leaders have been summoned to see the day of the Constitution, which is held on December 6 in the traditional act of the Congress of Deputies, attended by representatives of the powers of the State, political parties and regional presidents.

Subsequently, Casado told Ayuso that he will travel to Greece this Thursday to meet with its president, Kyriakos Mitsotakis, a trip that will prevent him from attending this Friday the act of tribute to the Magna Carta organized by Ayuso at Puerta del Sol, headquarters of the Madrid government. The same sources have recognized that “there was expectation” for the meeting, but that “they have greeted each other normally and also said goodbye normally“.

See also  What was life like before the internet? The catalog of the 100 things we have lost | Digital Transformation | Technology

(THERE WILL BE EXTENSION)