Skip to content
Home News “Rafa has that Real Madrid spirit, that DNA”: Marc López and Corretja analyze Nadal’s advance to the semifinals | The spar 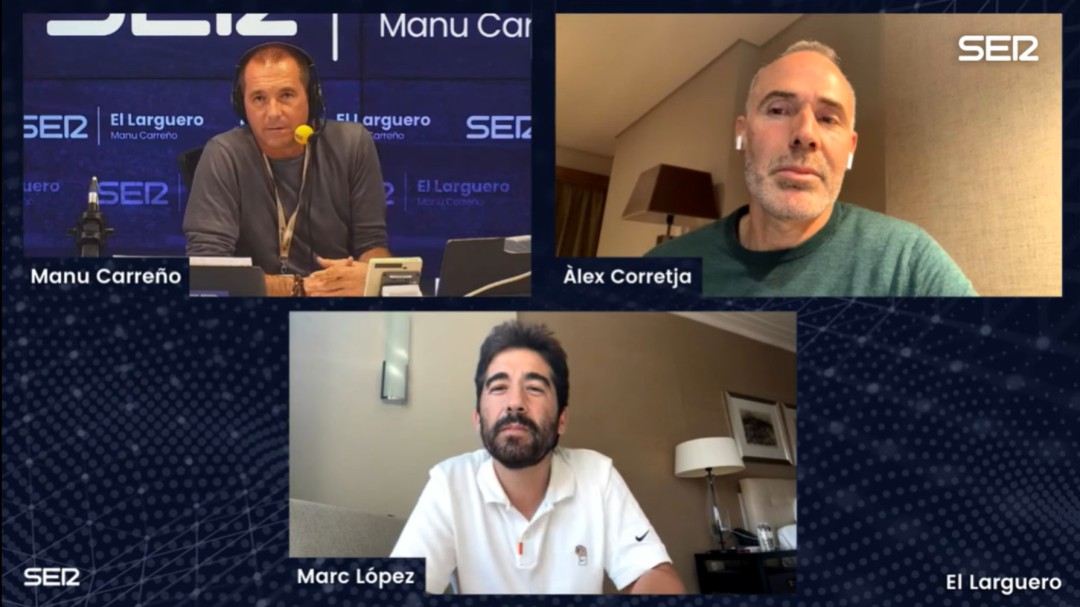 Rafa Nadal returned to get into a semifinal of a Grand Slam. He did it after beating the Canadian Denis Shapovalov. Nadal had won the first two, had lost the next two suffering from stomach problems but in the last one he came out on top. The game has also been marked by the dialectical battle that has taken place during and after the match. Shapovalov has described the chair umpires as “corrupt” for the stoppages during the problems that Nadal was dragging, which he has assured after he has suffered a heat stroke.

With Alex Corretja and Álvaro Benito, renowned tennis voices on Eurosport and Cadena SER, and the tennis player Marc López, now a member of Rafa Nadal’s coaching staff, we have analyzed Nadal’s journey in this Australian Open:

Alex Corretja: “Rafa has that Real Madrid spirit. You don’t know what’s going on but you know he’s going to score a goal when you least expect it. He has that DNA. Also, I think Rafa is superior to Shapovalov in many ways”.

Álvaro Benito: “Nadal’s first set is the best he has done in 2022 (…) In the fourth set I have come to think that he would still retire, but the way he plays and serves in the fifth set has blown away.”

Alex Corretja: “We had always said that with the serve it was the shot that won the fewest points (…) He, deep down, knew that he was better than Shapovalov. He has played to tune up, save money and has dedicated himself to running the important points. It has been a lesson in honor”.

Marc López: “Rafa is very happy to be in a new semi-final and also very tired. It was an epic match, there were nerves, a lot of uncertainty. He had a stomach problem at the end of the second set, a heat stroke that prevented him from surrender in the third and fourth set. Afterwards, you don’t know how he does it, but you always have the hope that he can get something that nobody expects and it was a bit like that. We thought that everything was lost, but as we are used to, he recovered the first game, then in the break Shapovalov helps, but he was very solid on serve. He played very intelligently.”

Marc López: “Was the stoppage between the fourth and fifth set key? Yes, it was. Shapovalov had already complained when they met at the net. He sold himself as a scuffle and asked him what he was complaining about. Later, Rafa has complied with the regulations. He finished the fourth set, they were able to attend to him, he took the opportunity to change his clothes because he sweats a lot… There are some rules and Rafa complied with them. If you don’t comply, they notify you, but this is secondary. Rafa He was able to recover, he won, and we’re in the semi-finals”.

Marc López: “The problem that Rafa had yesterday was not his foot, it was the heat stroke. He will be tired of that, but now we have two days off (…) I understand that we will play the semifinals in the first round, but I can’t confirm.”

See also  Why did Rishi Sunak resign? All you need to know about Rishi Sunak and Sajid David's resignations from Boris Johnson's Cabinet

Marc López: “Except for one game, he has played all the games at the same time. Rafa is very into routines, he warms up at 10:00, from 10:15 to 11:00 he plays tennis, then we play Parcheesi… he eats the typical rice dish. When the game starts before, he’s going to prepare his rackets, prepare his foot… and we’ll talk about the game. We go to the gym, we warm up and the court”.

Marc López: “The tics… Rafa does it well. With the serve there is a time you have between serves and he makes the most of it. He always looks at the clock, he does it and he does it correctly”.

Alex Corretja: “That’s 100% for him, not to disconcert the opponent. He’s always taken his time. That’s why I don’t understand Shapovalov’s complaints. The youth want it all for now, but he has 25 seconds and exhausts them In a deuce, in a break… that’s when they usually give him the warning, because sometimes he needs more time there. He knows how to manage emotions. In extreme situations, he is the best player in the history of tennis”.

Marc López: “Berrettini has one of the best services in the world and a spectacular forehand. The backhand, in comparison, is worse. If Rafa plays his forehand against that backhand (…) The beginning of the play will be very important, especially to the rest. When I served well, little can be done. You have to take advantage of the fatigue, so that it starts to fail first”.