The president of the Generalitat disqualified, Quim Roast, has appealed this Monday to the independence forces to convert the next Catalan elections in “a new plebiscite” to confirm the referendum of October 1, 2017.

Torra has made a statement in the Gothic Gallery of the Palace of the Generalitat, surrounded by the consellers, after meeting urgently with the Government shortly after receiving this afternoon the official notification of the judgment of the Supreme Court confirming his disqualification for disobedience, so he is no longer president since the sentence is effective.

Torra has indicated that the next elections resulting from his disqualification, which will take place in the next few months, should represent a “inflection point”.

And he has asked that they be transformed into “a new plebiscite and a new mandate that confirms the referendum of October 1”.

The former Catalan president has denounced that, “While the State apparatuses disqualify a president of the Generalitat, they accompany a monarch accused of corruption to hide in a dictatorship in the flight”.

In this context, he has considered that in these Catalan elections -which would be in February- citizens will have to choose between “democracy and freedom or repression and imposition, that is, between the Catalan republic of civic commitment or the Spanish monarchy of flags and army”.

He has also remarked that, although the independence movement “is not in a position to finish the road” to the republic, this does not mean that it has “backed down”, and has also emphasized that sovereignty “is not afraid of the ballot box”.

Torra has affirmed that Catalonia does not have strong institutions but does have a lively and dynamic society, and has pointed out that one of the conclusions that he has reached in his mandate is that “one of the obstacles to independence is autonomy itself”.

“Some judges have decided that I can no longer be the president of Catalonia. I want to tell you that no law that is unjust or applied for the purpose of revenge should be able to defeat democracy and I assure you that the irregularities committed to overthrow a new president they will have their trial in Europe, the only place where Catalan independence supporters can find justice “, he claimed.

Likewise, Torra has promised that he will not be “any obstacle on the way to independence” and has assured that he will continue working “without rest” from where he can “be useful and add”.

Torra left the Palau de la Generalitat at around 7:20 p.m. through the main access to the plaza Sant Jaume from Barcelona, ​​where hundreds of people summoned by the pro-independence entities have wrapped him up.

The disabled president has left accompanied by his wife and surrounded by all the members of the Government, who have held with him the banner with the motto “Freedom, political prisoners and exiles” and with a yellow ribbon that has cost him the sentence of the Supreme Court. 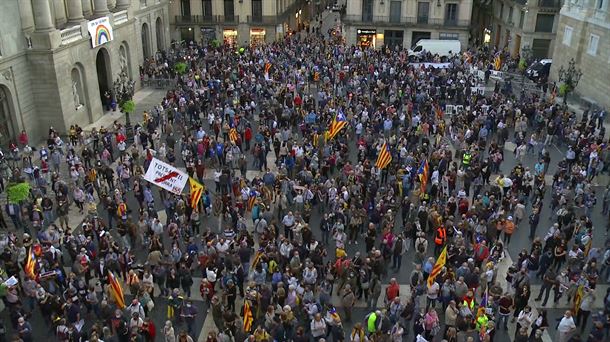