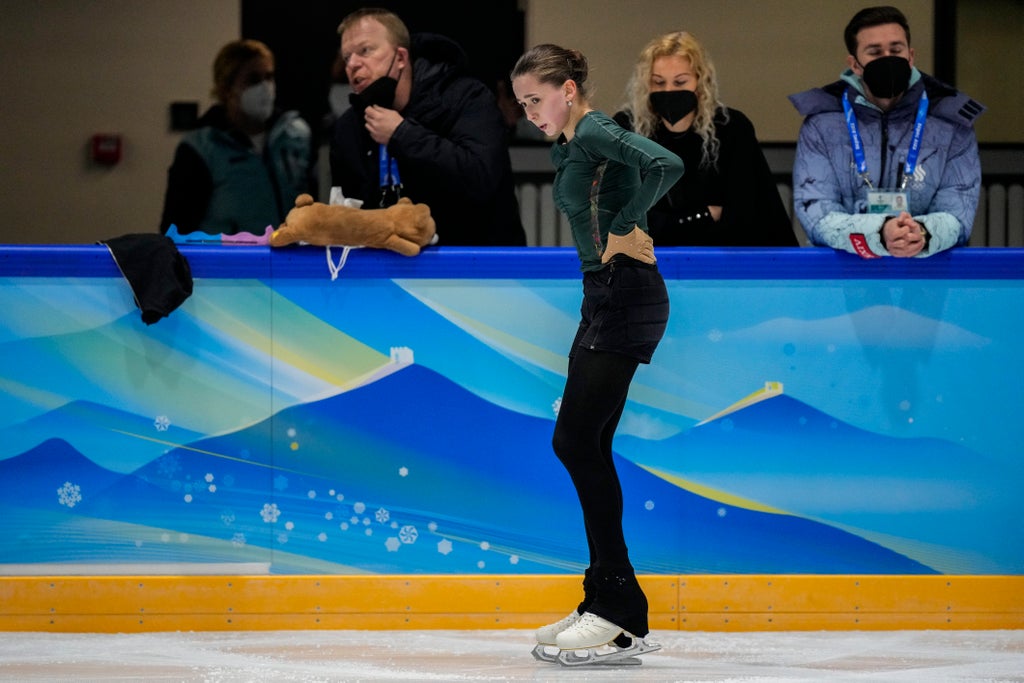 The biggest questions at the Beijing Olympics on Saturday hardly centered on who would win the six gold medals up for grabs.

Not with the fate of 15-year-old figure skater Kamila Valieva still undecided. Will the Russian be allowed to compete after testing positive for a ban substance? Can the ROC really keep the gold she helped win in the team event?

Serious inquiries arose in the mountains, too, when a former US Olympian alleged harassment by her former coach and teammate — both of whom are at the Beijing Games.

Even the oh-so-friendly Canadians have stepped into controversy, a tiff between countrymen stemming from a blown ruling by Olympic judges.

The story of the Beijing Games has been the stunning revelation and ensuing legal battle regarding Valieva, who tested positive for a banned heart medication on Dec. 25. The doping case came to light shortly after Valieva helped the ROC win team gold.

The Court of Arbitration for Sport confirmed it will hear appeals Sunday from the International Olympic Committee and the World Anti-Doping Agency challenging Valieva’s status as a medalist and her right to compete in the upcoming women’s program.

Valieva is still preparing as if she’ll perform, but broke down in tears Saturday after an emotional practice session. Valieva fell trying a triple axel — a jump she typically executes without a problem — while doing a run-through of her short program. She later landed two combos, a triple flip-triple toe loop and a triple lutz-triple toe loop before skating to the boards and giving her coach, Eteri Tutberidze, an emotional hug.

Former snowboardcross rider Callan Chythlook-Sifsof, a member of the 2010 Olympic team, wrote in an Instagram post that in addition to taking the photos, Foley had made inappropriate comments, and that Kearney repeatedly used the N-word to “intentionally get under my skin.”

Chythlook-Sifsof is from Alaska and describes herself as Yupik and Inupiaq.

Both Foley and Kearney were in China this week for the Beijing Games.

In a text to The Associated Press, Foley said he was surprised by the allegations and denied them.

Parrot acknowledged to The Associated Press that he failed to fully execute a grab on the first jump of the slopestyle course Monday and said he was lucky the judges didn’t see it. He maintains he still had the best run of the day and earned his first Olympic gold.

Parrot said there were no hard feelings about McMorris’ comments.

“He actually came to me earlier today and he apologized for his non-sportsmanship,” Parrot said. “I told him no worries.”

THE KIDS ARE ALL RIGHT

A young and inexperienced US hockey team went toe to toe with Canada in a bruising matchup between the longtime rivals and grinded out a 4-2 victory to remain unbeaten in two games at the Olympics.

“We didn’t back down from their physical play,” said captain Andy Miele, who led the US with a goal and an assist. “I love the way our team responded.”

Thanks to Miele’s response goal 70 seconds after Canada scored and 35 saves by Strauss Mann, the US is in the driver’s seat to earn a spot in the quarterfinals. Beating Germany on Sunday would put the Americans first in the group and could make them the top seed in the knockout round.

Lindsey Jacobellis won her second gold medal of the Olympics as she teamed with 40-year-old Nick Baumgartner for the title in the new event of mixed snowboardcross.

At 40 years, 57 days, Baumgartner, a concrete worker-contractor from Michigan, becomes the oldest snowboarder to win an Olympic medal. At 36 years, 177 days, Jacobellis, the author of a children’s book, is the second-oldest.

“You’re never too late to take what you want from life,” Baumgartner said.

Gao Tingyu thrilled the host country by becoming the first Chinese man to claim an Olympic gold medal in speedskating, winning the 500 meters. Gao added to the bronze medal he took in the 500 at the 2018 Pyeongchang Games.

The silver went to Cha Min Kyu of South Korea, whose time of 34.39 gave him a matching medal to the silver he won four years ago in Pyeongchang. Wataru Morishige of Japan took the bronze in 34.49.

Gabriella Papadakis and Guillaume Cizeron broke their own world record in the rhythm dance at the Beijing Olympics, scoring 90.83 points to begin the ice dance event. That gave the four-time world champs from France a cushion over Russian rivals Victoria Sinitsina and Nikita Katsalapov heading into the free dance.

Madison Hubbell and Zachary Donohue were in third, and their American teammates Madison Chock and Evan Bates were in fourth place. The medals will be decided with the free dance Monday morning in Beijing.