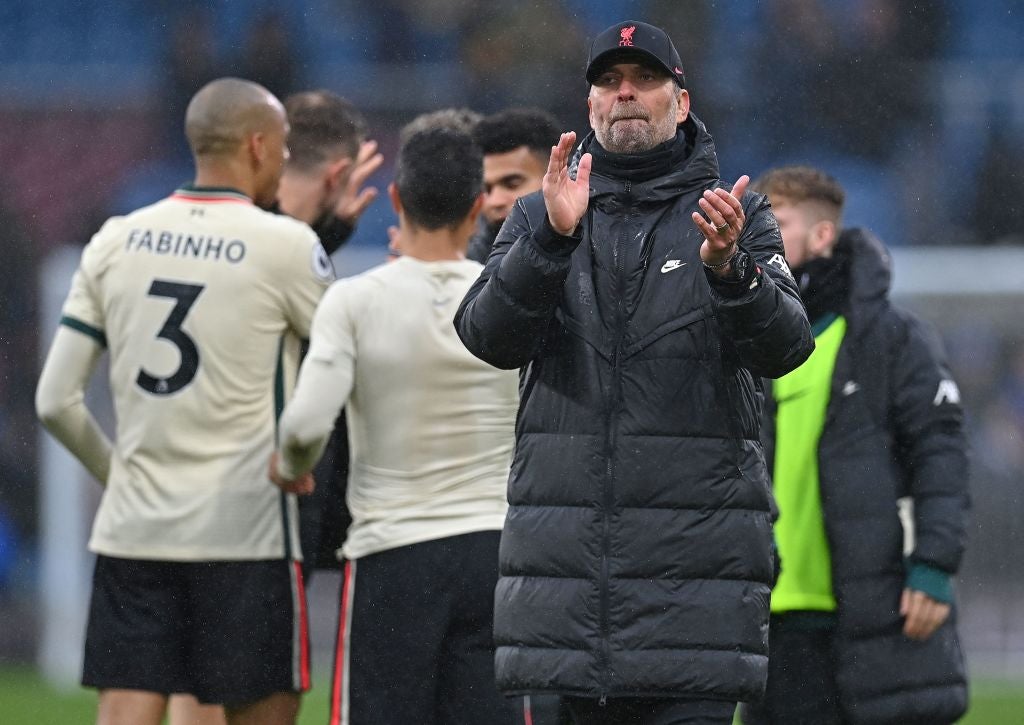 Liverpool kept the pressure on Manchester City at the top of the Premier League table, courtesy of a 1-0 win at Burnley on Sunday in grim conditions.

That’s almost the highlights of the game encapsulated right there, which was far from a classic but every bit the struggle Jurgen Klopp would have expected, even with the Clarets rooted to the bottom with just one league win all season.

Fabinho notched the winner, a scrappy goal from close range toward the end of the first half, but it was even before kick-off where the real talking points around Liverpool’s charge for trophies might have started.

The Reds will head off to Italy now as they resume their quest to win the Champions League, while soon after their return to these shores, a Wembley date with Chelsea awaits in the Carabao Cup final. With the gap at the top of the league back to nine points with a game in hand, perhaps all is not quite over and done with there either – all eyes might soon turn to the Anfield club’s trip to the Etihad in early April.

Chances for trophies everywhere, and so many matches to play along the way – it means squad depth and quality will again be a decisive factor for the top teams and, perhaps now at last – for now at least – Liverpool can reasonably say they have the options to match City and Chelsea.

Take, for instance, the case of Curtis Jones. The talented young Academy graduate had started Liverpool’s last three Premier League games, but he was not even in the squad here. Joe Gomez and Takumi Minamino suffered a similar exclusion, as did Divock Origi – though he has been working back from injury for some time so was a less-surprising omission.

But even aside from those not in the matchday 20, there are big decisions to be made over who starts and who must be the impact subs, who Klopp wants to direct the flow of the game and who might need to be the matchwinners later on.

At Turf Moor, a notoriously difficult place for teams to play their best football and emerge with points without having put in an industrial-scale shift of physical exertion, Klopp opted for comfort in familiarty: the original front three including Roberto Firmino, with Naby Keita earning a start alongside the captain Jordan Henderson and the omnipresent Fabinho in midfield.

Just those two selections alone, the Nos 8 and 9, reflected leaving Thiago, Alex Oxlade-Chamberlain, Diogo Jota and new signing Luis Diaz out of the team, even aside from the aforementioned names who didn’t even travel – a combined total of around £135m in transfer fees and 134 international caps in attacking options on the bench.

That also doesn’t include the uncapped, though surely not for long at this rate, Harvey Elliott. The young midfielder is back from injury and already impressing again, after a lightning start to 2021/22 which left his coaches so delighted.

While it wasn’t particularly a surprise to see neither the 18-year-old nor new arrival Diaz introduced for a less-than-warm Lancashire welcome, there will be different expectations, tactics, build-up patterns and defensive requirements against upcoming teams : Inter, Norwich, Leeds, Chelsea.

They are all, given what’s at stake in each game for Liverpool now, matches which hold elements of must-win about them, and with the unusual scenario of every player in the squad currently fit and available, Klopp’s massive calls will not just come with his in-game management, but his weekly managing of squad morale, individual confidence levels and juggling competition for places.

On the face of it it’s all positive for the Reds – certainly compared to last year’s regular shambolic need to unearth centre-back and midfield options – but it’s also something of a minefield to deal with potential match-winners who might feel they should be in the team and are possibly not just out of the line-up, but out of the squad.

With the supporters as much as his players, Klopp obviously has huge credit in the bank. Nobody will question and criticize a decision to play Jota over Firmino, Thiago over Henderson, Mane over Diaz or any other combination. At least not to start with.

But even if they are not in the eleven, those same names have often needed to come to Liverpool’s rescue to change the flow of a game and seal the points, progress or silverware. The manager’s biggest job over the next few months looks set to be as much to do with keeping spirits and determination raised among those not on the initial team-sheets, as with making the right calls on who should actually be there.