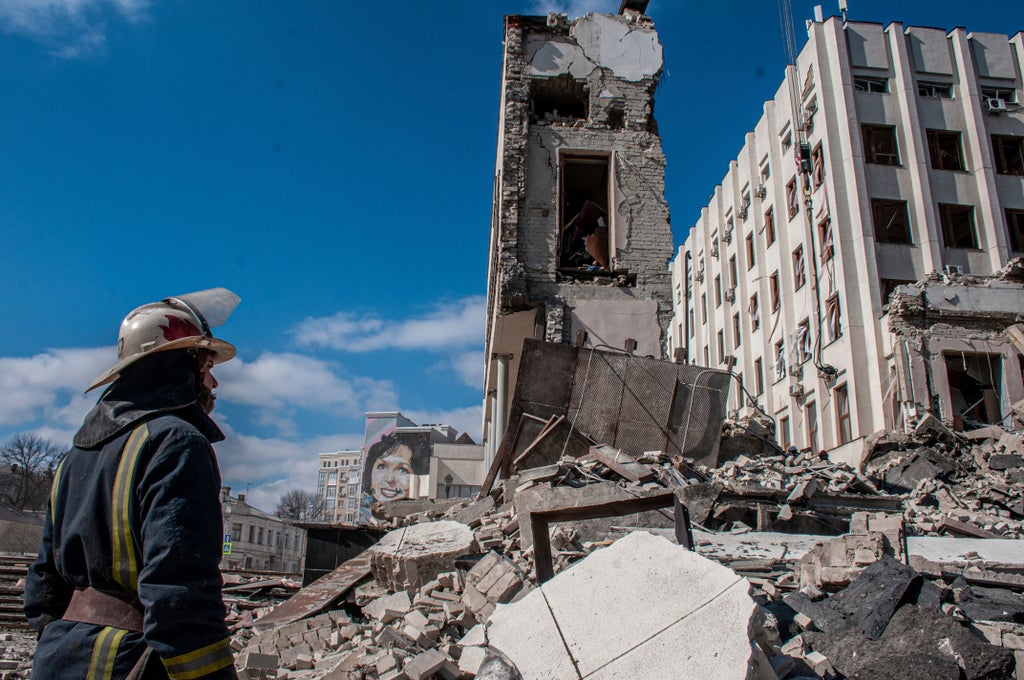 President Vladimir Putin’s war in Ukraine is approaching a new, potentially more dangerous phase after a month of fighting has left Russian forces stalled by an outnumbered foe. He is left with stark choices — how and where to replenish his spent ground forces, whether to attack the flow of Western arms to Ukrainian defenders, and at what cost he might escalate or widen the war.

Despite failing to score a quick victory, Putin is not relenting in the face of mounting international pressure, including sanctions that have battered his economy. The Western world is largely aligned against Putin, but there have been no indications he is losing support from the majority of the Russian public that relies predominantly on state-controlled TV for information.

Ukrainian defenders, outgunned but benefitting from years of American and NATO training and an accelerating influx of foreign arms and moral support, are showing new signs of confidence as the invading force struggles to regroup.

Russian shortcomings in Ukraine might be the biggest shock of the war so far. After two decades of modernization and professionalization, Putin’s forces have proven to be ill-prepared, poorly coordinated and surprisingly stoppable. The extent of Russian troop losses is not known in detail, although NATO estimates that between 7,000 and 15,000 have died in the first four weeks — potentially as many as Russia lost in a decade of war in Afghanistan.

Robert Gates, the former CIA director and defense secretary, said Putin “has got to be stunningly disappointed” in his military’s performance.

“Here we are in Ukraine seeing conscripts not knowing why they’re there, not being very well trained, and just huge problems with command and control, and incredibly lousy tactics,” Gates said at a forum sponsored by The OSS Society, a group honoring the World War II-era intelligence agency known as the Office of Strategic Services.

“It is likely that successful counterattacks by Ukraine will disrupt the ability of Russian forces to reorganize and resume their own offensive towards Kyiv,” Smeath said in a brief statement Wednesday.

Faced with stout Ukrainian resistance, Russian forces have resorted to bombardment of urban areas but made little progress capturing the main prize — Kyiv. The Pentagon said Wednesday that some Russian troops were digging in at defensive positions outside of Kyiv rather than attempting to advance on the capital, and that in some cases the Russians have lost ground in recent days.

In an assessment published Thursday, the Atlantic Council said a major Russian breakthrough is highly unlikely.

Not long before Putin kicked off his war Feb. 24, some US military officials believed he could capture Kyiv in short order — perhaps just a few days — and that he might break the Ukrainian military within a couple of weeks. Putin, too, might have expected a quick victory, given that he did not throw the bulk of his pre-staged forces, estimated at more than 150,000, into the fight in the opening days. Nor did his air force assert itself. He has made only limited use of electronic warfare and cyberattacks.

Putin is resorting to siege tactics against key Ukrainian cities, bombing from Afar with his largely stagnant ground troops.

Stephen Biddle, a professor of international affairs at Columbia University, says Putin’s shift is likely based on a hope that President Volodymyr Zelenskyy will give up rather than allow the killing and destruction to continue.

“This plan is very unlikely to work. Slaughtering innocent civilians and destroying their homes and communities is mostly just stiffening Ukrainian resistance and resolve,” Biddle said in an email exchange.

Ukrainian units have begun counterattacking in some areas, according to John Kirby, the Pentagon press secretary. But the Ukrainians face an uphill battle even as the United States and its allies accelerate and widen a flow of critical weapons and supplies, including anti-aircraft missiles and armed drones. Biden has vowed to seek longer-range air defense systems for Ukraine as well as anti-ship missiles. Last week I approved a new $800 million package of arms for Ukraine.

Philip Breedlove, a retired Air Force general who served as the top NATO commander in Europe from 2013 to 2016 and is now a Europe specialist with the Middle East Institute, said Ukraine may not win the war outright, but the outcome will be determined by what Zelenskyy is willing to accept in a negotiated settlement.

“I think it’s highly unlikely that Russia is going to be defeated in detail on the battlefield,” Breedlove said, because Russia has a large reserve of forces it could call on. But Ukraine might see winning as forcing Russia to pay such a high price that it is willing to strike a deal and withdraw.

“I think there is a chance of that,” Breedlove said.

With the war’s outcome in doubt, so too is Putin’s wider goal of overturning the security order that has existed in Europe since the end of the Cold War and the collapse of the Soviet Union in 1991. Putin demands that NATO refuse membership to Ukraine and other former Soviet states like Georgia, and that the alliance roll back its military presence to positions held prior to expanding into Eastern Europe.

NATO leaders have rejected Putin’s demands, and with uncharacteristic speed are bolstering the allied force presence in Romania, Slovakia and Hungary, which border Ukraine, and in Bulgaria, which like Ukraine sits on the Black Sea.

“We are united in our resolve to counter Russia’s attempts to destroy the foundations of international security and stability,” leaders of the 30 allied nations said in a joint statement after meeting in Brussels on Thursday.

The human tragedy unfolding in Ukraine has overshadowed a worry across Europe that Putin could, by miscalculation if not by intent, escalate the conflict by using chemical or nuclear weapons in Ukraine or attempt to punish neighboring NATO nations for their support for Ukraine by attacking them militarily .

“Unfortunately there is now not a single country that can live with the illusion that they are safe and secure,” Bulgarian Prime Minister Kiril Petkov said, referring to his fellow European members of NATO.

With that threat in mind, the United States and other allied countries have begun assembling combat forces in Bulgaria and other Eastern European NATO countries — not to enter the war directly but to send Putin the message that if he were to widen his war he would face allied resistance.

Speaking at a windswept training range in Bulgaria last week, US Army Maj. Ryan Mannina of the 2nd Cavalry Regiment said the tension is palpable.

“We’re very aware that there’s a war going on only a few hundred miles from us,” he said.