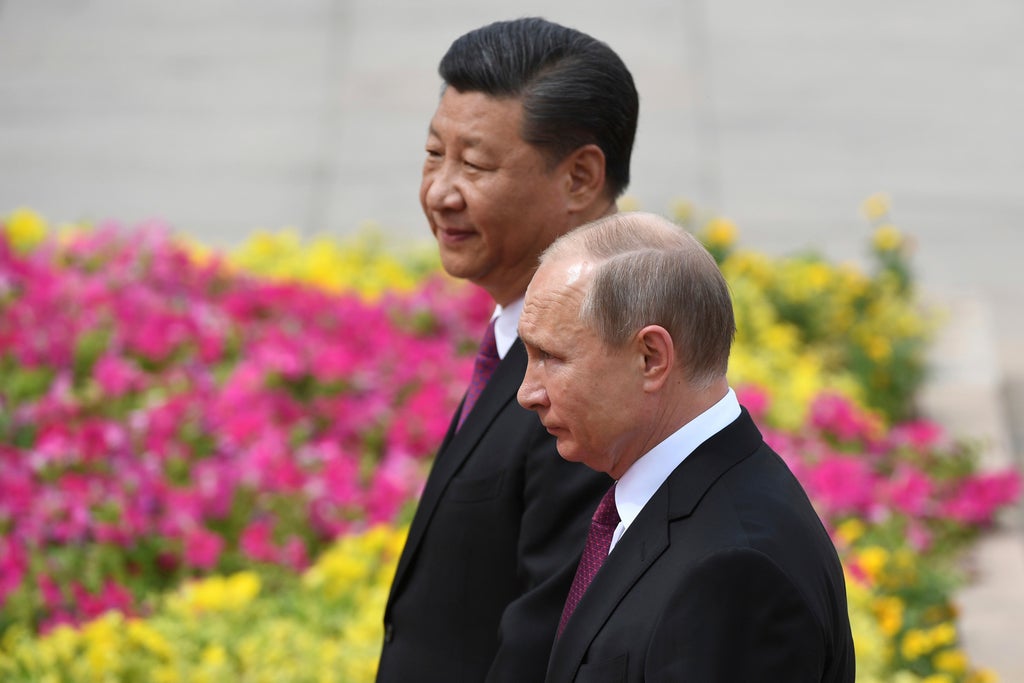 Russian President Vladimir Putin on Friday arrived in Beijing for the opening of the Winter Olympic Games and talks with his Chinese counterpart Xi Jinping, as the two leaders look to project themselves as a counterweight to the US and its allies.

The Russian leader’s visit comes amid growing Chinese support for Moscow in its dispute with Ukraine that threatens to break out into armed conflict.

Putin’s presence makes him the highest-profile guest at the event following the decision by the US, Britain and others not to send officials in protest over China’s human rights abuses and its treatment of Uyghurs and other Muslim minorities.

Putin’s arrival from Moscow early Friday afternoon was confirmed by Russian state news agency RIA. The two leaders are due to hold talks then have a private lunch together.

The discussions mark their first in-person meeting since 2019 and come as China and Russia increasingly align their foreign policies bilaterally and in world bodies such as the United Nations, in opposition to the United States-led bloc.

Leaders of the five ex-Soviet Central Asian nations, which have close ties with both Russia and China, all followed Putin’s lead and are attending, along with other states that have political and economic interests with Beijing.

The Putin-Xi talks are expected to focus on coordinating their countries’ foreign policies, with Putin writing in an article published Thursday by the Chinese news agency Xinhua that Moscow and Beijing play an “important stabilizing role” in global affairs and help make international affairs “more equitable and inclusive.”

The Russian president criticized “attempts by some countries to politicize sports to the benefit of their ambitions,” an apparent reference to a US-led diplomatic boycott, which does not affect the participation of athletes in the Games.

Yuri Ushakov, Putin’s foreign affairs adviser, said that Moscow and Beijing plan to issue a joint statement that will reflect their shared views on global security, as officials from the two countries are set to sign more than a dozen agreements on trade, energy and other issues.

Ushakov noted that Moscow and Beijing have close or identical stands on most international issues. He said China supports Russia’s demands for security guarantees that have underpinned the standoff over Ukraine.

Chinese Foreign Minister Wang Yi told US Secretary of State Antony Blinken in a call last week that Moscow’s security concerns need to be taken seriously and addressed, a statement that marked a notable policy shift for Beijing.

A buildup of more than 100,000 Russian troops near Ukraine has fueled Western fears that Moscow is poised to invade its neighbor. Russia has denied planning an offensive but urged the US and its allies to provide a binding pledge that NATO won’t expand to Ukraine and other ex-Soviet nations or deploy weapons there, and roll back its forces from Eastern Europe — demands firmly rejected by the West.

Some observers suggested that Beijing is closely watching how the US and its allies act in the standoff over Ukraine as it ponders further strategy on Taiwan, arguing that indecision by Washington could encourage China to grow more assertive.

See also  Romney says he was right about Russia in 2012 and mocks Obama putdown: 'The 80s called and we didn't answer'

Russia and China have held a series of joint war games, including naval drills and patrols by long-range bombers over the Sea of ​​Japan and the East China Sea. In August, Russian troops for the first time deployed to Chinese territory for joint maneuvers.

Putin has also noted that Russia has been sharing highly sensitive military technologies with China that helped significantly bolster its defense capability.