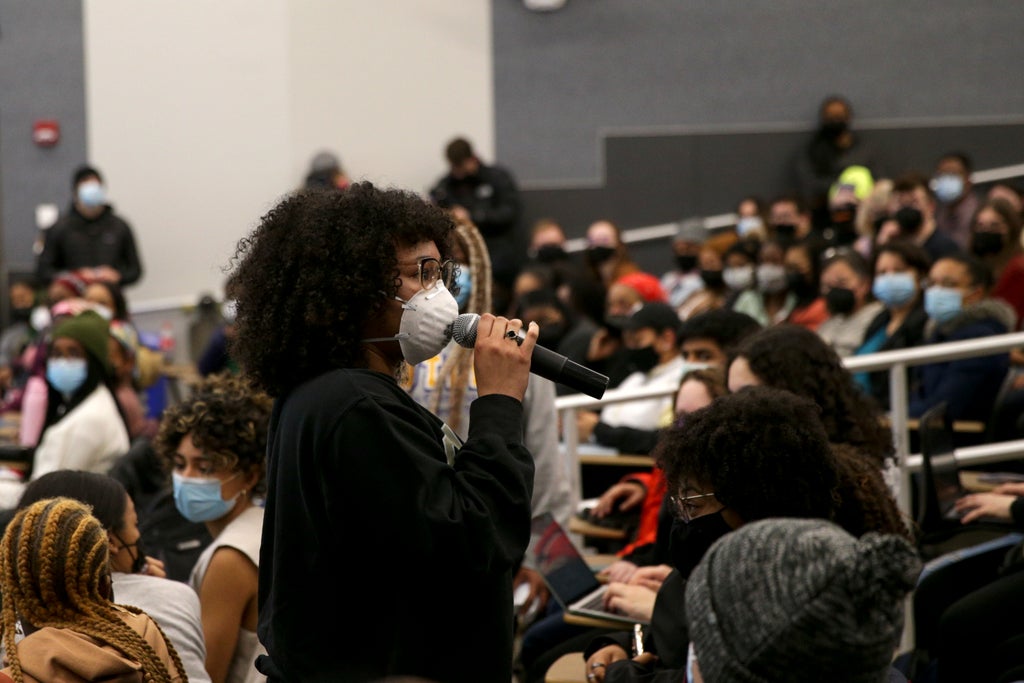 A Purdue University police officer received death threats and is on leave until further notice, the university said, after he was caught on video using his elbow to pin a Black student to the ground by the neck as the student yelled “You’re choking me .”

The student, 24-year-old Adonis Tuggle, told The Associated Press on Thursday that the officer also punched him and pressed his face into the snowy ground during the Feb. 4 arrest on the school’s campus in West Lafayette, Indiana

“He was smothering me, almost as if you were trying to drown somebody underwater,” Tuggle said.

Part of the arrest was captured on cellphone video by Tuggle’s girlfriend, which was first reported by entertainment website TMZ.

Tuggle, a junior psychology major, said he was arrested, charged with resisting arrest and spent about an hour in jail before bailing himself out.

Purdue said in a statement Thursday night that campus police Chief John Cox placed the officer on a “leave of absence after the officer and department received death threats.” The statement, which did not elaborate on those threats, said they were being investigated by campus police.

Cox said his department was conducting an internal review of the officer’s conduct during the arrest, and that Indiana State Police would also investigate.

Cox said the officer involved was responding to a call from a third party who said “it appeared a woman was being held against her will.”

The statement did not identify Tuggle, who said he doesn’t know who called the police, only that the officer arrived and screamed at him to get away from his girlfriend, who is white.

“I was already a couple of feet away from my girlfriend,” said Tuggle, who added that she tried speaking to the officer. The officer used an expletive and told her to shut up, he said.

“I told him he had no reason to be disrespectful,” Tuggle said. “He was yelling at her and she was yelling at him. I told my girlfriend to calm down and I heard him scream ‘OK buddy, you’re going down,’ and he threw me against the car.”

At some point, Tuggle said he told his girlfriend to record what was happening. She told the officer he was hurting her boyfriend from her. She tapped the officer, who warned her that he would use his Taser on her if she did it again, Tuggle said.

When other officers arrived, Tuggle said one held one of his arms while another held his leg.

“I was still screaming: ‘He has his elbow on my neck,’” Tuggle said. “I have dropped his full weight on my face and neck. In the heat of the moment, the only thing I was thinking about was trying to get this officer off of me.”

“You could hear me say ‘I can’t breathe. You’re choking me. You’re hurting me.’”

Tuggle said the 2020 death of George Floyd who said he couldn’t breathe as former Minneapolis Police Officer Derek Chauvin pressed his knee onto the Black man’s neck, is not lost on him.

“Basically, what happened to George Floyd almost happened to me, except I had an elbow not a knee, and fortunately, I’m still breathing instead of being in a casket,” he said.

Andrew M. Stroth, a civil rights attorney, said Tuggle and his family are demanding a full investigation and the release of police body camera video. He said charges against Tuggle should be dropped.

At a Thursday night town hall hosted by Purdue’s Black Student Union, a campus conference room was filled to capacity and many students sat outside in hallways. Attendees demanded action and suggested independent oversight of Purdue’s police department, more accessibility to body cameras and increased, more permanent resources for Purdue students of color.

Nigel Taylor, the vice president of the Black Student Union, said the students outlined “a clear plan to enforce these goals if they weren’t to happen.”

“Of course we want to do this peacefully, we really don’t want to get to that point. However, we do want to make sure this agenda is met because quite frankly we’re tired of having these same conversations year after year after year,” he told WLFI-TV.

Purdue President Mitchell Daniels, Jr. said in a statement that the inquiry into the officer’s conduct would be “swift and thorough.”

“Should there be a finding of misconduct by the officer, appropriate action will be taken promptly,” he said.