The president of the Generalitat, Carles Puigdemont, stopped yesterday, Thursday, his decision to call early elections in Catalonia, as he was prepared to do in the morning, having not obtained “guarantees” that the Spanish Government of Mariano Rajoy would then renounce to apply the Article 155 of the Constitution.

Yesterday was one of the most confusing and disconcerting days in the recent history of Catalan politics, with constant script changes, postponed or canceled appearances and nerves, especially in the sovereign ranks, which have experienced hours of high tension and have been located on the edge of the internal fracture.

After the marathon seven-hour summit on Wednesday at the Palau de la Generalitat, the day began with a new meeting of Puigdemont with his councilors, which was joined by the deputies of Junts pel Sí (JxSí), whom The Catalan president has communicated his intention to call elections if the Government renounces intervention through article 155.

The decision had been forged with the discreet contribution of political actors such as the Lehendakari, Iñigo Urkullu, who met with a delegation of Catalan businessmen to suggest that Puigdemont call elections to avoid 155, while the socialists Miquel Iceta, José Montilla and Núria Marín also intensified their mediating contacts with the president and Moncloa. 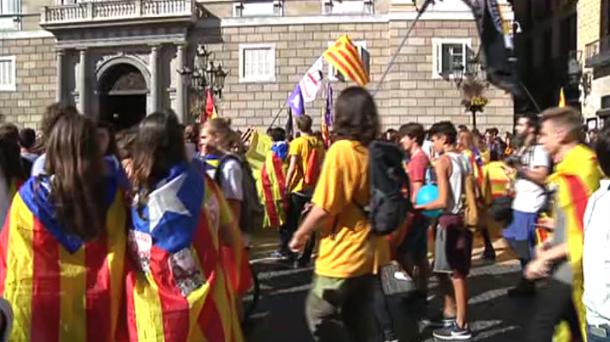 Atmosphere outside the Palace of the Generalitat. EiTB

The announcement of the elections fell like a jug of cold water among the deputies of ERC, Democrates and even among some of their PDeCAT co-religionists, including the mayor of La Seu d’Urgell (Lleida), Albert Batalla, and the former responsible of Communication of the CDC and the Government Jordi Cuminal, who came to announce on Twitter that they were withdrawing from the party.

See also  The Constitutional Court suspends the referendum of Catalonia 2017

While the leaderships of the parties that make up the JxSí coalition were meeting on an extraordinary basis, the Government announced an appearance by Puigdemont at 1:30 p.m. to report the call for early elections, which finally took place at 5:00 p.m. 00 hours.

Cries of ‘Independence’ after the institutional declaration 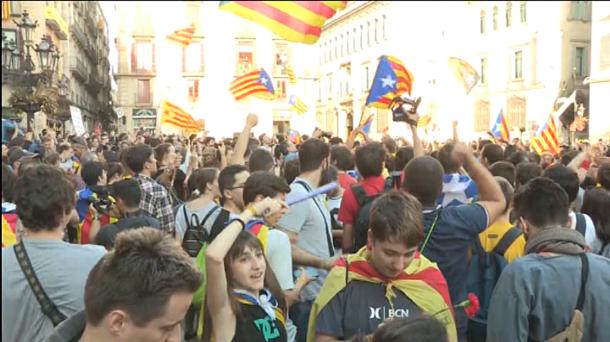 But when the displeasure of the sectors that advocated responding to 155 with a declaration of independence became evident the most – ERC’s deputy spokesperson in Congress, Gabriel Rufián, evoked Judas’s betrayal with a laconic message on Twitter: “155 coins of silver “-, the doubts intensified when first the Government has delayed one hour the appearance of Puigdemont and soon it has announced that it was annulled.

When information began to circulate that pointed out that the PP would not be willing to completely renounce to apply the measures approved on 155 although Puigdemont renounced to declare independence and dissolved the Parliament, the Catalan president has appeared at 5:00 p.m. to do, now yes, an institutional statement.

From the Gothic Gallery of the Palau de la Generalitat, Puigdemont explained: “I have been willing to call these elections as long as guarantees are given that allow them to be held in absolute normality. There are no guarantees that justify the call for elections today “.

Puigdemont regretted that the central government not only has not given a “responsible response” to his offer, but has “taken advantage of this option to add tension at a time when what is needed is maximum détente and dialogue.”

At this point, he said, “it is up to the Parliament to proceed with what the parliamentary majority determines in relation to the consequences of the application” of 155 “against Catalonia.”

Precisely on Wednesday JxSí transferred to Puigdemont his commitment to adopt a “clear” and “unitary” position in the plenary session called for this afternoon in favor of approving a declaration of independence.

An hour later the specific plenary session began in the Parliament, in which he accepted the reproaches of the opposition, refusing to speak.

The president of Junts pel Sí (JxSí), Lluís Corominas, affirmed in the plenary session of the Parliament that his group will propose today, Friday, to “continue the mandate” of the referendum of October 1 and assured that the Catalan chamber “will not allow” the ” aggression “implied by the application of article 155. 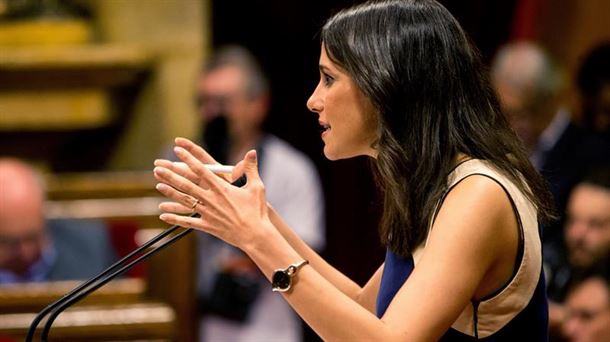 For this plenary session, Junts pel Si has invited all its mayors, more than 700, of which more than 200 have already confirmed their presence.

Debate on 155 in the Senate

At the same time, in the Senate, the vice president of the Spanish Government, Soraya Sáenz de Santamaría, defended “rescuing” Catalonia from those who insist on putting it “outside the law.”

In his intervention in the Senate Commission that debates the agreement to apply article 155 of the Constitution, Sáenz de Santamaría accused the pro-independence activists of “destroying the best Catalonia in its history.”

The joint commission in charge of processing the Government’s measures against the Generalitat under article 155 of the Constitution agreed to introduce in the proposal a socialist amendment in favor of the “gradual application” of the precepts proposed by the Executive.

The Minister of Business and Knowledge, Santi Vila, presented his resignation on Thursday night to the president of the Generalitat, Carles Puigdemont, according to sources from the Department.

Vila, who had already privately warned colleagues from his party that he would resign if the Government opted for a unilateral declaration of independence, met for a few minutes with Puigdemont in his office in Parliament at the end of the plenary session, to communicate his decision.

The Guarantees Council does not endorse ceasing Govern and limiting Parliament

The Statutory Guarantee Council has issued an opinion in which it does not endorse the use of article 155 of the Constitution to dismiss the President of the Generalitat, Carles Puigdemont, and his Government, nor to limit the activity of Parliament and intervene in bodies of the Catalan administration.

This advisory body, which ensures the adaptation of Catalan laws to the Statute and the Constitution, yesterday published a non-binding opinion in which it is critical of some of the measures that the Council of Ministers has proposed to the Senate with the aim of reestablishing the constitutional order in Catalonia.

The text of the Council of Guarantees emphasizes that the measures applied by virtue of article 155 must have “a content and an application” of a gradual nature, must be proportionate, must be limited to “the areas directly involved and essential to achieve the interest constitutional law that justifies them “and” cannot have a sanctioning purpose “.

“The dismissal of the president and the Government of the Generalitat, the limitation of the essential functions of the Parliament, nor the adoption of general measures of intervention of the Administration of the Generalitat would not respect this configuration”, establishes one of the conclusions, approved with seven votes in favor and one against.