The former president of the Generalitat, Carles Puigdemont, arrested on Thursday in Sardinia (Italy) by order of the Spanish Supreme Court and released on friday, has reaffirmed this Saturday its commitment to independence of Catalonia: “We will continue with the fight to achieve our goal. We will not give up. I will continue traveling through Europe.”

He has said it at a press conference from L’Alguer together with his lawyer, Gonzalo Boye; the head of the Carles Puigdemont Office, Josep Lluís Alay, and the Trustee of the Italian municipality, Mario Conoci, after meeting with the President of the Generalitat, Pere Aragonès, and the vice president, Jordi Puigneró.

“I am happy with the final result. Our political and legal arguments have been proven. The arguments were very solid. The Italian justice has taken a few hours to make a decision that Spain has not taken for four years,” he added.

He has also declared that the Spanish Government only “wants to dialogue with those who give it parliamentary support” and has regretted that there is “a pro-independence party, no less, that is not in Pedro Sánchez’s plans.”

For his part, the President of the Generalitat, Pere Aragonès, has expressed his solidarity with the former Catalan president, and has celebrated his freedom, although he has warned that it “is not complete.”

Aragonès has denounced that “the repression of the Spanish State continues” and has defended that “the only solution is amnesty”, after meet in Alghero (Sardinia) with former President Carles Puigdemont.

In an appearance before the press, the Catalan president has requested “complete freedom, the withdrawal of all arrest warrants against Puigdemont and all the exiles, the end of the repression against the independence movement and the demand for a political solution, which should be amnesty and recognition of the exercise of the right to self-determination. “

The Vice President of the Government, Jordi Puigneró, has traveled with Aragonès. 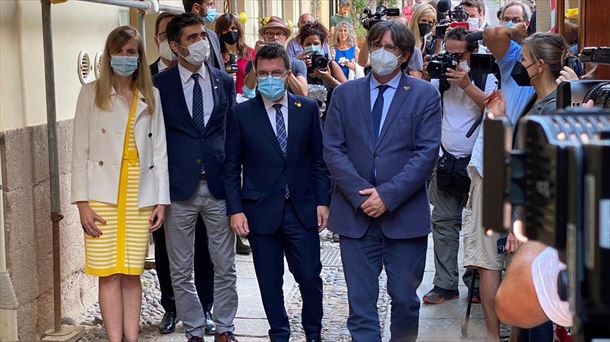 Puigdemont: “I am used to being persecuted by Spain”

Puigdemont has previously met today with the President of Sardinia, Christian Solinas, and the mayor of Alghero, Mario Ponoci. In statements to the media, he said that “I am used to being persecuted by Spain, but the end is always the same: I am free and I am going to continue fighting. “

Puigdemont had traveled to Sardinia to participate in an international meeting organized by the Adifolk association, together with other personalities such as the Minister of Foreign Action of the Generalitat, Victoria Alsina.

Upon his arrival at Alghero airport this Thursday, he was detained by the Italian Police and taken to a maximum security prison in Sassari, until on Friday the Court of Appeal of this city allowed him to leave, without precautionary measures or restrictions on mobility .

The Italian Justice had to decide whether to validate the detention of the former president and the application or not of precautionary measures, and then the Court will have to determine if there are reasons for his delivery to Spain. For this decision, a first hearing has been set on October 4 in the Sassari Court.

Aragonès celebrated yesterday that Puigdemont could have been released from prison with a message on social networks: “We celebrate that President Puigdemont is released, but we continue to condemn the judicial persecution that has forced him to live in exile for four years.”

Previously, in an appearance at the Palau de la Generalitat together with his advisers, he had warned the Government that the arrest “does not help the process of resolving the political conflict” and does not contribute to generating “trust between the parties.”

The majority forces on the Basque political scene denounced the arrest and expressed their solidarity with him and the Catalan people. The first vice-lehendakari and Basque Government security adviser, Josu Erkoreka, affirmed that Puigdemont’s arrest is the consequence of having “prosecuted a political problem.”