Skip to content
Home News Publisher: I Confronted a Scammer This Week

They got me. To reassure you, I was lucky: I didn’t lose a grand sum, but I came seriously close to something bad. Here’s how it unfolded, with all the shame, guilt, and embarrassment thrown in.

In my case it was a couple of urgent items I’d ordered online I was desperate to receive on time. So when the text from “Royal Mail” arrived two days later, I was already vulnerable without even realizing it. Apparently there was a parcel with insufficient postage on it in the delivery center. “Classic Ebayers”, I thought to myself.

I wasn’t even fully convinced yet. The URL looked dodgy for sure, but it was the appearance of the site itself that got me, right down to the crisp logos, cleverly highlighted tracking numbers, and the very slick terms and conditions bar at the bottom of the page. It really did look legit. I paid the postage charge. Mistake number one.

It was another week before the phone call came. And that’s the first thing you need to know about scammers: their schemes rely on patience. They play the long game while you’re wrapped up in your short-term fears. It is the proverbial fishing net in the river, waiting for the fish to come downstream.

Thinking nothing of the previous week’s events, I answered the phone to “Andrew”, and immediately made mistake number two. He had a nice Scottish accent, a beloved trait of call center companies who know that people short on trust are more likely to believe someone with a regional dialect. I’ve had countless legitimate conversations with banking staff like him before: mid-to-late twenties, male, Glaswegian. And that’s how they get you. They know the little bubbles you live in.

Andrew told me there had been some illegitimate activity on my account, namely a purchase on Amazon worth hundreds of pounds. Mistake number three: confirmation bias. I’d had a nasty experience on Amazon in 2016, when someone hacked my account and ordered themselves a new iPhone to my office. The thought that all they had to do was lie in wait for the postman and then pretend to be me when the moment came opened my eyes. As Andrew spoke, I recall feeling exactly the same things I did then: anger; annoyance; a desire to get it sorted.

Andrew used that to reel me in further, and started asking me about my bank accounts. Mistake three: believing the phone call is legitimate because the caller has details that sound legitimate. But of course they did. I had already handed them over a week before online.

With the Amazon experience and the fear thrown in, “this is the card number ending [redacted], right?” sounds reassuring, not threatening. People want to feel taken care of, and that’s precisely the kind of ploy that achieves it.

By this point, we were a good five to six minutes into our phone call. I then got a message from my colleague Sunniva, who had clocked that I was on a call involving money, and messaged me on Teams. “It could be a scam” or words to that effect. I Googled the phone number. Alarm bells. 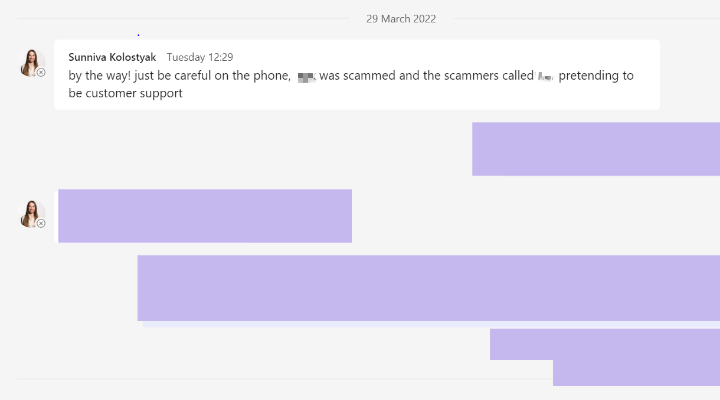 At the end ploy really set my heart racing. Andrew informed me there had also been a loan application made in my hometown. He seemed to know a lot about where I lived, and where specifically the branch was (scammers use Google too). He said he would check the branch CCTV for evidence of who might have been responsible for the bogus loan application.

By that point I was fully divested from the process (no bank call center would ever have access to branch CCTV) but it was too late in some respects. He promised he would call back later with more information about what had supposedly gone on.

Now aware this was all an elaborate ruse, I immediately got on the phone to my actual bank, asking to see any suspicious evidence of money malice, and requesting all my bank cards be canceled and replaced. Funnily enough, my genuine call handler was pretty much indistinguishable from Andrew – all the more reason to make sure you know who you’re talking to. Relieved that no serious damage had been done, I carried on with my day.

Five hours later came phone call number two. It was Andrew again, acting all lovely and informing me he’d obtained the CCTV footage from my bank branch. I played along for a few seconds, but then interjected with a question of my own.

I can’t quite remember precisely what I said, but it was something along the lines of “how do you sleep at night?” – in much the same style of delivery as that video of Matt Baker interviewing David Cameron on The One Show. Unbothered, Andrew continued with his routine. I said: “I think what you’re doing is disgusting,” and only then did his voice go completely silent, before changing altogether.

“Come to Glasgow,” he said, with an air of menace. And with that, the whole thing was over. I did attempt to ring back just to see what would happen, but all I got was a scratchy recording of my bank’s actual telephone voice. They cover their tracks, even at the end.

I’ve learned a lot from it. I knew all the lessons already in theory, but clearly not well enough. Now I’ve learned them the hard way.

The lessons. Scams are becoming increasingly sophisticated. This one worked to a script that played out over days, not minutes. That means your vigilance has to be longer-term too. Secondly, it can happen to anyone. All it took were the right circumstances for me to fall hook line and sinker for this particular plot.

Finally, never give away or confirm your card details or address on a phone call with a stranger. That sounds obvious, but failing the first two lessons will lead you precisely into that trap. I’m glad I got off lightly. It might not have been so pretty were it not for Sunniva and her well-timed intervention. Look out for eachother!

Readers are advised to avoid phone calls from the number 08081 960468. For more information on banking scams go to Citizens Advice. For more information on investment scams go to the FCA website. Ollie Smith is UK editor of Morningstar. To participate in a new Coffee & Zoom initiative designed to offer readers a chance to highlight financial topics they find interesting, email him at [email protected]