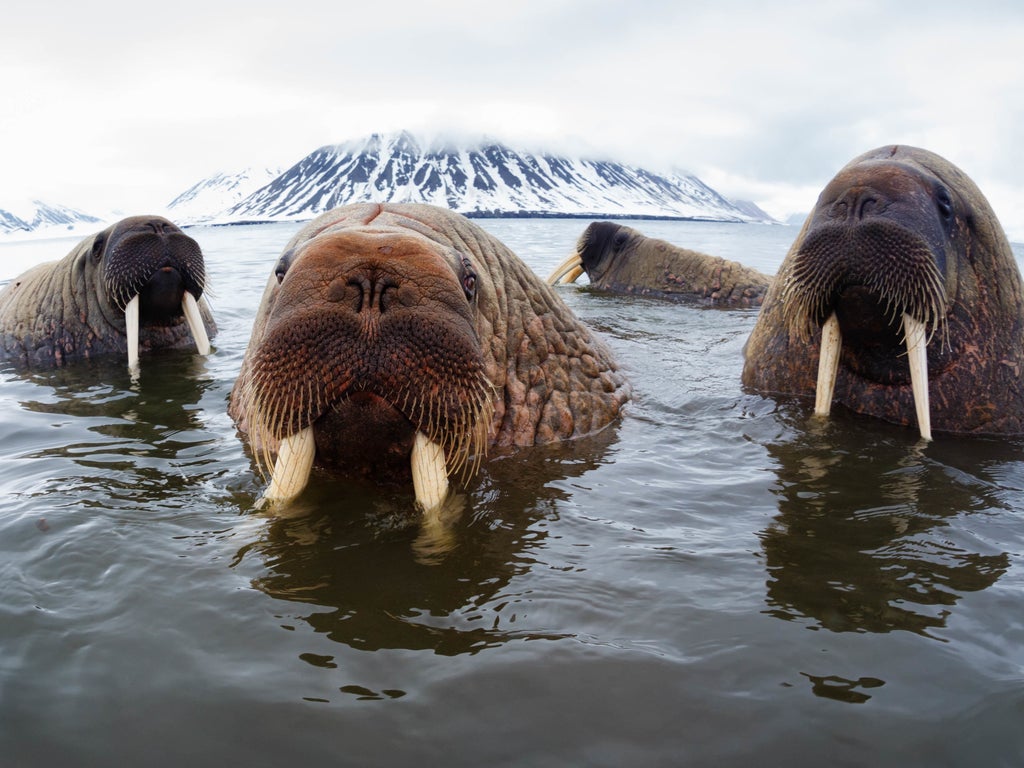 Amateur environmentalists are being invited to count walrus visible from space as part of a major research project to monitor dwindling sea ice.

The Walrus from Space project allows people to use satellite images to take part in a census of the marine mammals in the Atlantic Ocean and the Laptev Sea, north of Siberia.

The research project, run jointly by the British Antarctic Survey (BAS) and WWF, comes as Walrus are increasingly affected by the worsening climate crisis, which is rapidly reducing the amount of sea ice in the Arctic. The species is now listed as “vulnerable” by the International Union for Conservation of Nature (IUCN).

The Arctic is warming almost three times faster than the rest of the world, and roughly 13 per cent of summer sea ice is disappearing per decade. Walrus need the sea ice to haul themselves up out of the sea while remaining close to their food source.

April Matthews, the Walrus from Space project manager at WWF, said thousands of people had already counted walrus using images provided by space and intelligence company Maxar Technologies’ DigitalGlobe since the project was launched at the end of 2021.

She added: “The challenge is, we don’t know enough about how climate change is impacting walrus in the Arctic. We know the Arctic is warming three times faster than the global average; we also know walrus use sea ice to be close to their food source, for resting, and to give birth away from predators. As sea ice diminishes, more walrus are forced to seek refuge on land.

“The aim of this project is to better understand how the disappearing sea ice will impact Laptev and Atlantic walrus populations now and in the future.”

The British Antarctic Survey said the satellites would generate thousands of high-resolution images of walrus congregating on more than 25,000km2 of Arctic coastline – an area larger than Wales.

“From the comfort of their own homes, aspiring conservationists around the world can study the satellite pictures online, spot areas where Walrus haul out onto land, and then count them,” the organization said.

Walrus uses sea ice for resting and to give birth to their young. As sea ice diminishes, more walrus are forced to seek refuge on land, congregating for the chance to rest.

Overcrowded beaches can have fatal consequences. Walrus are easily frightened, and when spooked they stampede towards the water, trampling one another in their panic. Resting on land (as opposed to sea ice) may also force walrus to swim further and expend more energy to reach their food – which itself is being negatively affected by the warming and acidification of the ocean.

The BAS said Walrus were also vulnerable to being disturbed by shipping traffic and industrial development, as the loss of sea ice makes the Arctic more accessible.

Existing population estimates are based upon the best data and knowledge available, but there are challenges associated with working with marine mammals in such a vast, remote and largely inaccessible place. This project is aiming to provide an up-to-date count of Atlantic and Laptev walrus populations.

Hannah Cubaynes, Wildlife from Space research associate at the BAS, said: “Assessing walrus populations by traditional methods is very difficult as they live in extremely remote areas, spend much of their time on the sea ice and move around a lot. Satellite images can solve this problem as they can survey huge tracts of coastline to assess where Walrus are and help us count the ones that we find.

“However, doing that for all the Atlantic and Laptev walrus will take huge amounts of imagery, much too much for a single scientist or small team, so we need help from thousands of citizen scientists to help us learn more about this iconic animal.”

The WWF highlighted Ms Matthews’ work on the project ahead of the International Day of Women and Girls in Science on Friday.

She said: “What makes this project so special is public participation, and I am thrilled so many people have already taken part. We are continuously working on the Walrus from Space platform to make it simple for anyone to take part. Together we can help scientists, communities, and decision-makers make better-informed decisions to ensure healthy populations of walrus in the future.”

Earlier this year, Cub Scouts from across the UK became walrus-spotters to test the platform ahead of its public release. The Scouts have been a partner of WWF since the early 1970s, and over 57 million scouts globally are engaged in environmental projects.

Nine-year-old Imogen Scullard, a Cub Scout involved in the project, said: “I love learning about the planet and how it works. We need to protect it from climate change. We are helping the planet by doing the walrus count with space satellites, which is really cool. It was a hard thing to do but we stuck at it.”