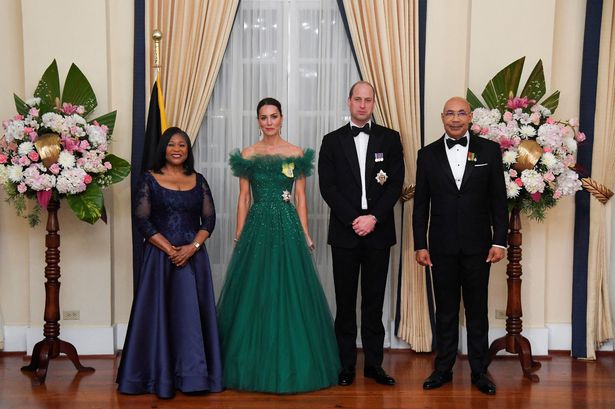 Prince William has expressed his “profound sorrow” over the stain of slavery on Britain in a landmark speech during the royal tour of the Caribbean.

The Duke of Cambridge said he “strongly agreed” with his father Prince Charles’s previous declaration that Britain is forever stained by its role in the global slave trade.

Future king William, who together with wife Kate is on an eight-day tour of the region this week, addressed dignitaries in Jamaica, saying: “Slavery was abhorrent. And it should never have happened.

“While the pain runs deep, Jamaica continues to forge its future with determination, courage and fortitude.

“The strength and shared sense of purpose of the Jamaican people, represented in your flag and motto, celebrate an invincible spirit.”

Amid impassioned protests on Tuesday in the capital Kingston just hours before William and Kate touched down on the Caribbean island, the Duke chose to address calls for the royal family to acknowledge Britain’s shameful history.

But the second in line to the throne stopped short of fulfilling demands for him to issue an apology for the monarchy’s role in sanctioning the transfer of thousands of black slaves from their homelands in the Caribbean and across Africa.

Speaking to an audience at a black-tie dinner at King’s House, the official residence of the Governor-General of Jamaica, William personally addressed Prime Minister Andrew Holness, who earlier in the day told the Duke and Duchess during a meeting at his office how the island nation is “moving on” from centuries of British rule.

In another nod to the devastating conflict occurring in Ukraine during the ongoing brutal Russian invasion, William said we must never forget the “terrifying toll and inequality of war and conflicts across the world”.

The Duke said: “Over the decades, Jamaica has witnessed huge change.

“But what hasn’t changed is the irrefutable Jamaican belief in upholding democracy and working together with other nations in support of peace, security and international law.

“Prime Minister, your strong statement condemning the invasion of Ukraine is testament to that.

“Catherine and I were deeply moved by the plight of the Jamaican students who have recently returned safely from Ukraine.

“Their experiences are a reminder of the terrifying toll and inequality of war and conflicts across the world, which we must never forget.

“Anniversaries are also a moment for reflection, particularly this week with the International Day of Remembrance of the Victims of Slavery and the Transatlantic Slave Trade.

“I strongly agree with my father, The Prince of Wales, who said in Barbados last year that the appalling atrocity of slavery forever stains our history.

“I want to express my profound sorrow. Slavery was abhorrent.

“And it should never have happened.”

In 2018 during a visit to Ghana Prince Charles said the atrocities had left an “indelible stain” on the world.

In November the heir attended a ceremony to recognize Barbados becoming a republic after centuries of British rule, Charles recognized the “appalling atrocity of slavery”, saying the slave trade came “from the darkest days of our past…which forever stains our history “.

Meanwhile, William also spoke of the pain experienced by Jamaicans but praised their courage throughout their history and paid tribute to the Windrush generation.

He added: “While the pain runs deep, Jamaica continues to forge its future with determination, courage and fortitude.

“The strength and shared sense of purpose of the Jamaican people, represented in your flag and motto, celebrate an invincible spirit.

“It is this same spirit that spurred on the Windrush generation, who came to the United Kingdom to help rebuild after the Second World War.

“We are forever grateful for the immense contribution that this generation and their descendants have made to British life, which continues to enrich and improve our society.

“I’m delighted that a national monument acknowledging and celebrating the Windrush generation by Jamaican artist, Basil Watson, will be unveiled later this year in Waterloo Station in London.”

William added how he and Kate, who are on their first visit to Jamaica, hoped to bring their three children back to the island after experiencing warmth on the streets of Trench Town when they visited the birthplace of reggae legend Bob Marley on Tuesday.

And he said they “deeply admired” the dedication and commitment of the Jamaican Defense Force.

William added: “Catherine and I only wish we had more time to spend with you all in Jamaica.

“There is so much more to learn.

“I hope this will be one of many visits.

“And next time we’d love to bring our children too.”

The Duke and Duchess of Cambridge with the Prime Minister of Jamaica Andrew Holness and his wife Juliet, during a meeting at his office in Kingston, Jamaica, on day five of their tour of the Caribbean on behalf of the Queen to mark her Platinum Jubilee.
(

As part of William and Kate’s tour, in part to celebrate the Queen’s Platinum Jubilee this year, William passed on his grandmother’s wishes and said he had been touched upon hearing from locals of their affection for Her Majesty, adding how she was considered everyone’s grandmother.

He said: “Catherine and I are very pleased to be here on our first official visit to Jamaica.

“All my family have enjoyed their visits here so much. They have waxed lyrical about the warmth and sense of fun of the Jamaican people and the beauty of this island.

“Already in our short time here, Catherine and I are delighted to have felt what Bob Marley described so many years ago – the spirit of ‘One love’ that Jamaica has given to the world and which makes this country so special.

“I’m particularly pleased tonight to convey the very best wishes from my grandmother, The Queen of Jamaica, on the occasion of her Platinum Jubilee.

“It is no secret that The Queen has a deep affection for Jamaica, forged on her very first visit here with my grandfather, The Duke of Edinburgh, in 1953.

“And likewise I have been touched to hear today from Jamaicans, young and old, about their affection for The Queen.

“Her dedication, commitment, and sense of duty to the Commonwealth family is deeply admired.

“She may be my actual grandmother, but everyone counts her as their grandmother too. And I’m ok with that!

“And of course, as The Queen marks seventy years on the throne, this is also a very special year for Jamaica, as you celebrate your sixtieth anniversary of independence.

“Now that’s double the excuse for a party!”

Closing his speech William chose a line from one of Bob Marley’s most famous songs, saying: “One Love”.