Prince Harry was today seen cheering on athletes at the Invictus Games in the Netherlands as the Royal Family reels from his US TV interview bombshells.

The Duke of Sussex stared blankly ahead as a mini convoy of two buggies sped him to the powerlifting event at the copper colored stadium at the Zuiderpark on the penultimate day of the Invictus Games.

Two bodyguards – including former US Secret Service agent Christophe Sanchez – accompanied him to the event, along with three members of the Archewell production team.

It comes as the Royal Family continues to process Prince Harry’s comments made during a US TV interview the day before the Queen celebrated her 96th birthday.

Despite her grandson’s incendiary remarks appearing to question those around her – and him opening up to NBC about their ‘private’ time together – Her Majesty looked happy and relaxed as she chatted away to her bodyguard as he drove her through the grounds of her beloved Sandringham , which was also treasured by her late husband Prince Philip.

Harry, who was again filmed by a Netflix camera crew as he arrived at the stadium today, will give a short speech at the closing ceremony of the games on Friday with the King of the Netherlands, Willem-Alexander also in attendance.

The Duke of Sussex cheers on competitors during the powerlifting event at the Invictus Games, in the Netherlands, on Thursday 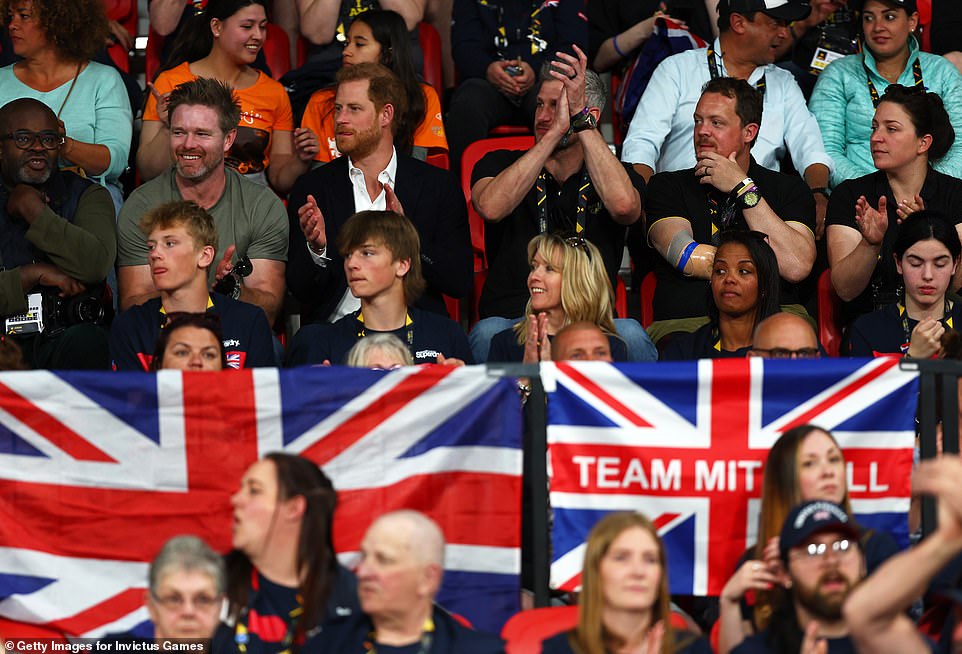 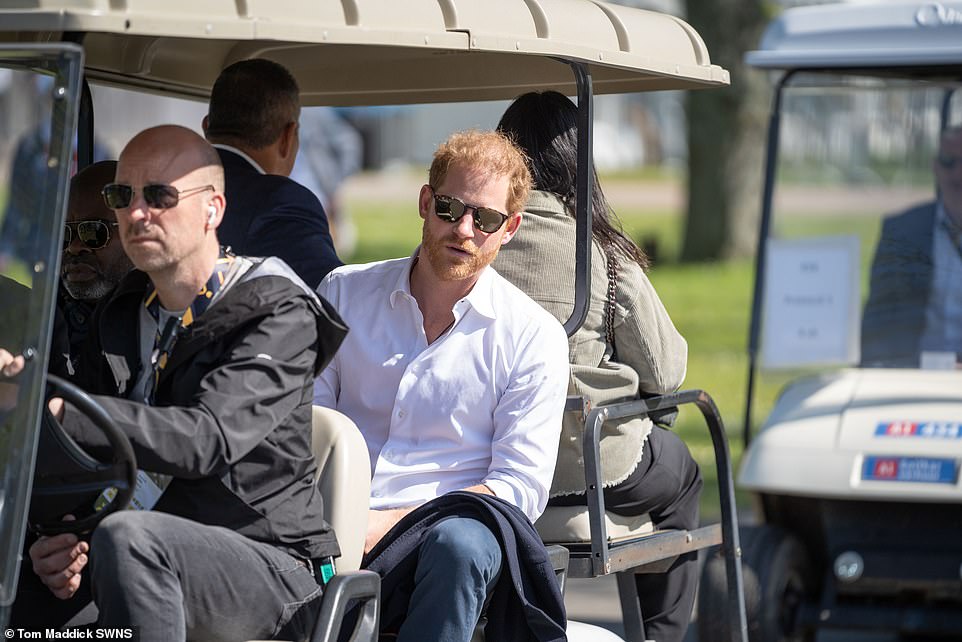 The Royal Family was this week left reeling when Harry, who met with British Defense Secretary Ben Wallace in The Hague today, appeared to issue a veiled warning to those closest to the Queen when interviewed by a US network, saying he wanted to make sure his grandmother was ‘protected’ and had ‘the right people around her’.

The duke did not elaborate on whether he was referring to royal aides or members of his own family, but his comments may have deepened his rift with his father the Prince of Wales and his brother William and perplexed palace officials.

Harry also risked further fueling the rift with his estranged older brother by stating that their late mother, Diana, Princess of Wales, was now watching over him from beyond the grave as ‘she’s done her bit’ with Prince William and his family.

In an NBC TV appearance, Prince Harry also opened up on his ‘special’ relationship with his grandmother, and his very public claim that she confides in him things she cannot talk to anyone else about.

And in a barbed comment, he said of his visit: ‘I’m just making sure that she’s protected and got the right people around her’.

Prince Harry also claimed he needs extra protection when he visits the UK, in comments that threaten to undermine the Queen’s birthday and spark a row over security that could overshadow her historic Platinum Jubilee.

The Duke and Duchess of Cambridge dodged an awkward question about the Duke of Sussex’s claim he came to Britain last week to ensure the Queen is ‘protected’.

Prince Charles is said to be at the end of his tether with his youngest son as palace staff who cared for Her Majesty throughout the pandemic accused the Duke of Sussex of ‘breathtaking arrogance’.

Her Majesty is celebrating her birthday with her typical lack of fuss today – and tributes have poured in from her family including William and Kate.

To mark the occasion, a glorious photograph has been released of Her Majesty standing with two of her own favorite fell ponies, Bybeck Nightingale and Bybeck Katie.

The Duke and Duchess of Cambridge shared a picture of them with the Queen, and one with the monarch’s great-grandchildren, and said on Instagram: ‘Wishing Her Majesty The Queen a very happy 96th birthday today! An inspiration to so many across the UK, the Commonwealth and the world, it’s particularly special to be celebrating in this Platinum Jubilee year’.

Prince Charles shared a series of images of his smiling mother through her life – as well as with him and his wife Camilla – with the caption: ‘Wishing Her Majesty The Queen a particularly special 96th birthday today, as we celebrate her Platinum Jubilee year’ . 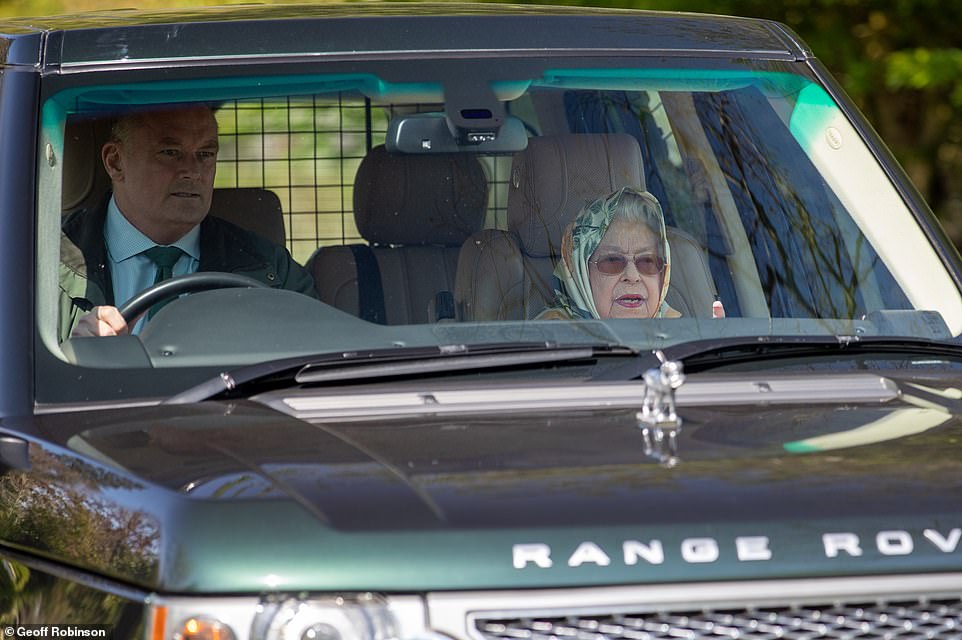 The Queen happily chatted as she went for a drive on her 96th birthday, which she is celebrating at Sandringham today 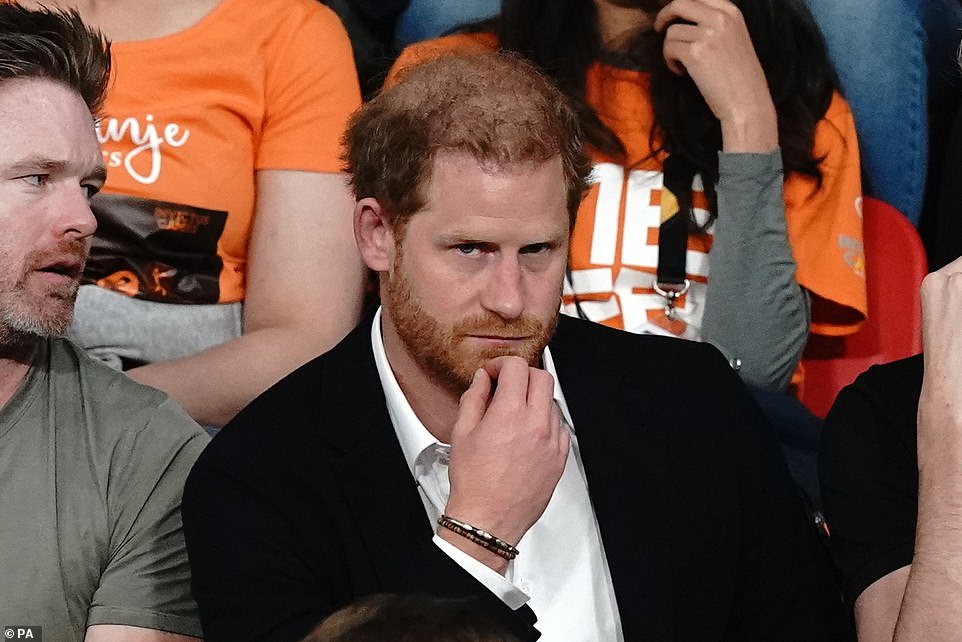 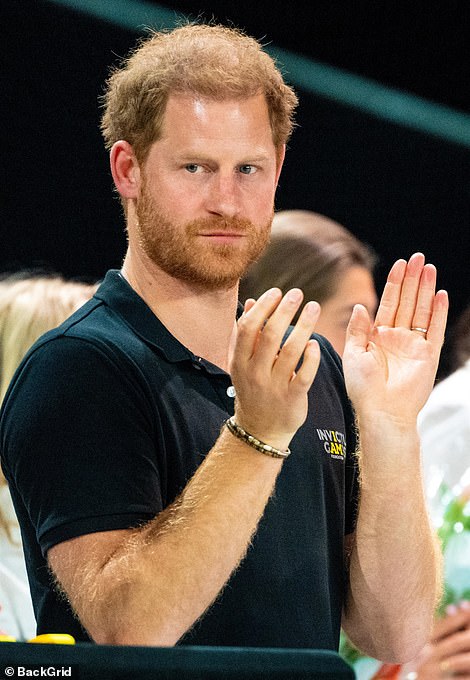 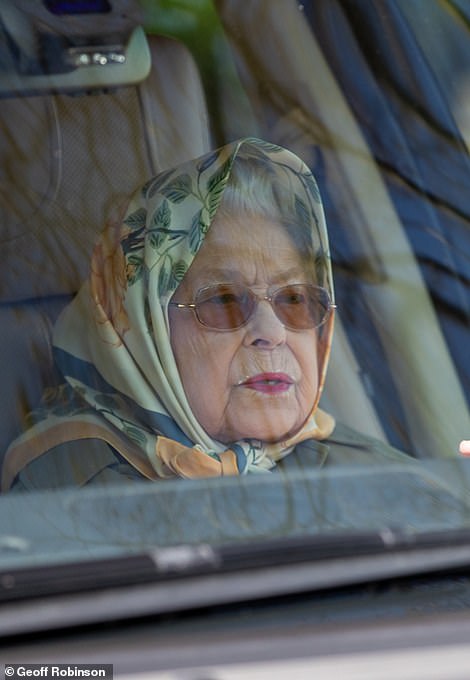 Prince Harry, Duke of Sussex visits Wheelchair Rugby during the 5th the Invictus Games at Zuiderpark in The Hague yesterday. Her Majesty (right today) is believed to be seeing family and friends at her de ella Norfolk home

Harry’s decision to acrimoniously quit as a working royal and spend the last two years making a string of damning accusations against his family from across the Atlantic in California is understood to have caused the Queen great heartache because she is known to adore him.

Despite speaking to US network NBC to boast about his special bond with the monarch – and how he makes her laugh – Harry still refused to commit to attending her Jubilee celebrations.

He again blamed ‘security issues’ for being unwilling to commit to him, Meghan, Archie, two, and Lilibet, 10 months, joining Her Majesty and the rest of his British family to mark the Queen’s 70 years on the throne.

Harry and Meghan made a secret visit to Windsor last week before the Invictus Games but in his High Court battle with the Government he has said he ‘does not feel safe’ in the UK.

Former royal bodyguards have insisted that when with the Royal Family or on royal property, the Sussexes would be fully protected by armed police.

Prince Harry on secret Queen trip, how America is ‘home’ and whether he misses William & Charles