CROWDS in Winchester welcomed Prince Charles with applause on Thursday (March 3) as he arrived to officially unveil The Arc.

The Prince of Wales revealed a commemorative plaque to mark the completion of a project which has seen the city’s library undergo a £715,000 transformation.

His Royal Highness also kept his promise to view the statue of Licoricia of Winchester in front of what was a bumper crowd, having previously had to withdraw from a scheduled visit in February after testing positive for Covid.

He quickly allayed all fears of a second upset, however, when he stepped out of the back seat of his Jaguar shortly after 11am to be greeted by cheers from the crowd.

Lord Lieutenant of Hampshire, Nigel Atkinson, introduced him to a selection of local leaders including Winchester MP Steve Brine and Mayor of Winchester, Councilor Vivian Achwal, before he set off down Jewry Street to speak with delighted spectators.

One of those spectators, Margaret Gregory, gifted Prince Charles with a bunch of flowers. She said: “He spoke to me and asked me whether I’d picked them myself which I had, he was so close, I couldn’t believe it.”

Winchester resident Elizabeth Read, 72, was another who got a chance to shake hands and speak with him.

She said: “He asked me if I was from Winchester and apologised for not being able to come in February, I told him I hoped he had recovered well, and he joked that he wasn’t a very good advert for the vaccine.” 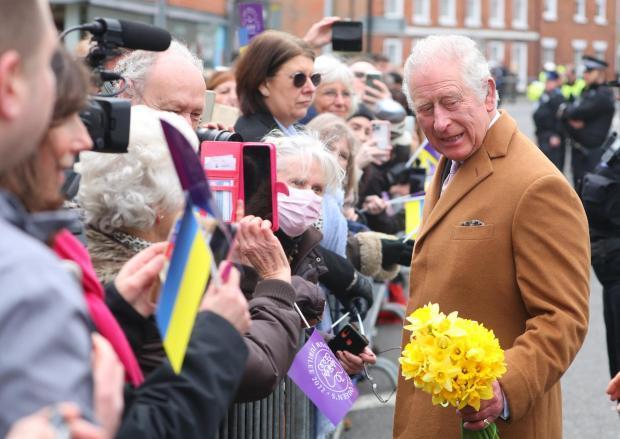 His Royal Highness returned to the statue where Maggie Carver, chair of the Liquor appeal, gave a moving speech.

She said: “Licoricia was a lone, remarkable, inspiring woman with a memorable name. She is also an opportunity to tackle the unfair prejudice that Jews have faced.

READ MORE: 21 of the best photos from Prince Charles’ visit to Winchester

“Licoricia, your bones have rested for 750 years in this city. We have brought you to life again for a special and inspiring purpose. You are seen walking towards your home, on the opposite side, on this very street. Welcome back, may you do much good.” 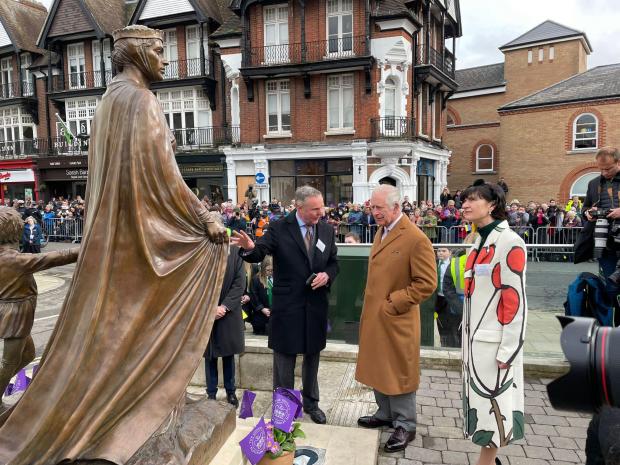 Prince Charles then took the opportunity to view the statue with Maggie’s husband, William Carver, and award-winning sculptor, Ian Rank-Broadley, who said he was “extremely complimentary” of his work.

He said: “It’s an enormous pleasure to see Prince Charles, he’s an incredibly busy man. Normally if something is cancelled, his diary is so full that it’s very difficult to get him a second time, so I take that as a great favor for Winchester. He was extremely complimentary of the statue.”

The Prince of Wales was in good spirits as he met the schoolchildren from Park Community School, St Bede Church of England Primary School and Kings Worthy Primary School, who helped unveil the statue on February 10 and other trustees who campaigned for the statue’s erection. 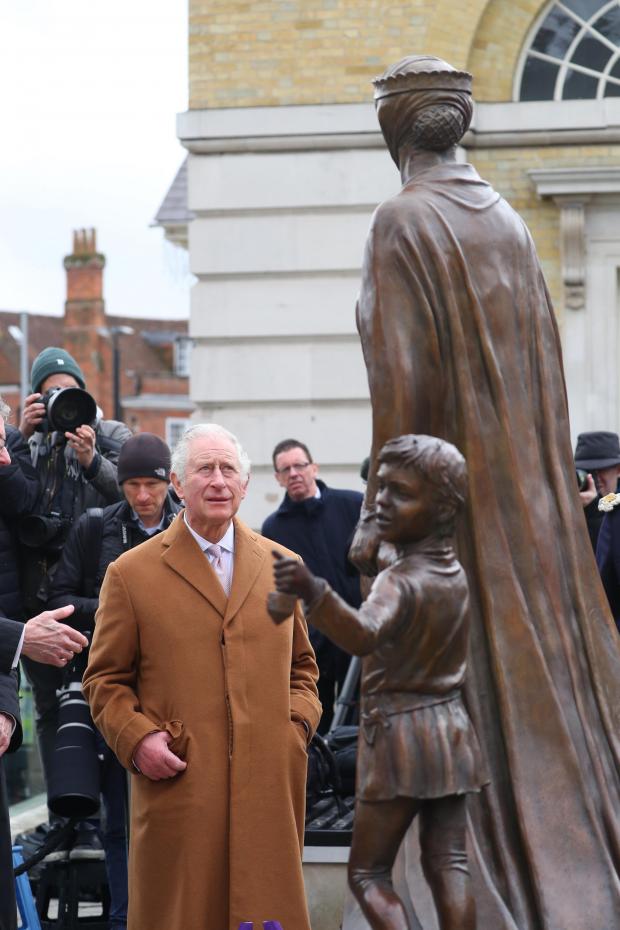 Tony Stoller, from Liquoricia appeal, said: “It has been a huge day for the Jewish community, for Winchester, for the statue and for those of us who have been working on this for years.

“It’s remarkable that Prince Charles was able to come back at such short notice. The fact that it matters to him is very important to us as well.

“Clearly, this is something he thinks is very important. He was very supportive and very interested and very informed and impressed.”

In what was a day of dual celebrations for Winchester, His Royal Highness moved inside to the lobby of the city’s library The Arc where he officially unveiled the site, formerly called the Discovery Centre, after its £715,000 refurbishment.

SEE ALSO: Statue of Licoricia of Winchester in place ahead of Prince Charles’ visit

He said: “It’s been a remarkable day and I would like to thank everybody who turned out to join us here in Winchester, to welcome His Royal Highness The Prince of Wales.

“It has been so uplifting to see people enjoying a special day together, helping to write a new chapter in the city’s already rich royal history, and creating an early high point in Hampshire’s Platinum Jubilee celebrations.

“It is particularly fitting that the Prince’s visit seeks to promote tolerance and diversity by highlighting the inspiring life story of an extraordinary medieval Jewish businesswoman. The statue of Licoricia has been a generous gift to Winchester, which provides another compelling reason to visit The Arc, an exciting new addition to the city’s cultural scene and the home of Winchester library.”

As Prince Charles emerged from the library he was met with further cheers and spent another 10 minutes meeting people in the crowd before heading back down Jewry Street as part of an escorted convoy. 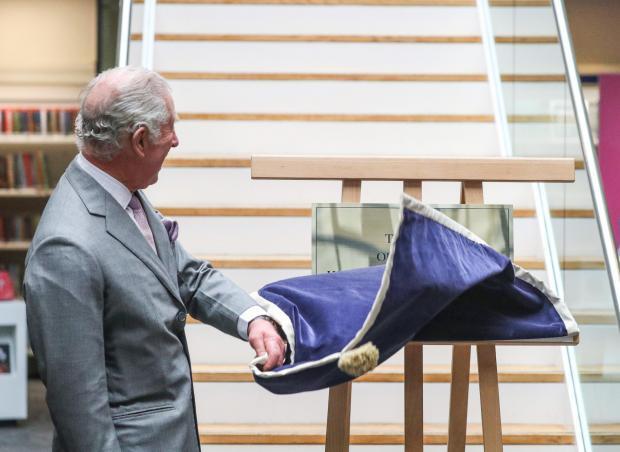 Oliver Rule, a teacher from Kings Worthy Primary School, who spoke with Prince Charles before his departure, said: “It has been really exciting. The children have been so excited all week. The prince asked the children how the half term was. He asked if St Bede and King Worthy schools were rivals! Our school council was here, so it was a mix between year two and year six.”

See also  'It is Russia against humanity': Life in the Ukrainian city where bombs are 'hitting houses' and aid workers were 'turned back'

Ukrainian flags were handed out for spectators to wave alongside the Union flag as a mark of solidarity, and council leader Keith Mans also paid tribute to those struggling in Ukraine during a powerful speech.

Prince Charles said yesterday he has been deeply moved by the bravery of Ukrainians faced with “terrible aggression” from Russia.

Reflecting on the opening of The Arc and the ongoing events in eastern Europe, MP Steve Brine said: “I’m flattered that he came back so quickly, especially considering his diary. We spoke when he arrived and I thanked him for what he said yesterday about Ukraine, which was very welcome by those of us in parliament and by the government. 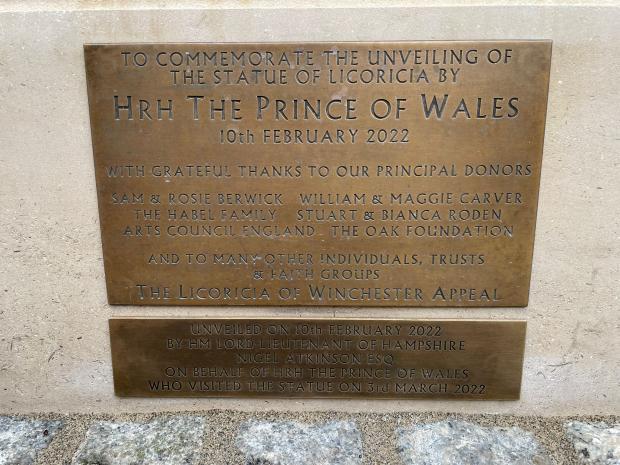 “He asked about yesterday’s standing ovation in the House of Commons for the Ukrainian ambassador which was quite a moment, unprecedented in my time in parliament, and we just exchanged thoughts on how powerful that was.”

In the aftermath of Prince Charles’ visit crowds quickly dispersed and all roads closures which had been in place were swiftly removed by city workers.

Message from the editor

Thank you for reading this story. We really appreciate your support.

Please help us to continue bringing you all the trusted news from Winchester by sharing this story or by following our Facebook page, click this link and hit like.