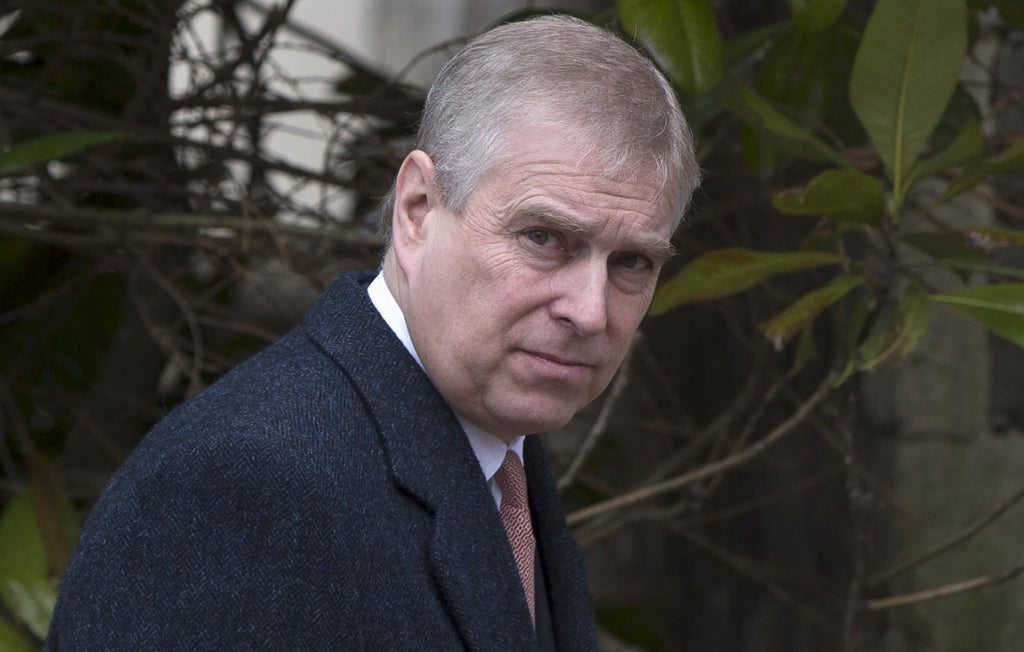 Prince Andrew commended Virginia Roberts Giuffre’s “bravery” after reaching a settlement in her sexual abuse lawsuit against him.

Ms Giuffre’s lawyer David Boies revealed the settlement in a motion filed with US District Judge Lewis Kaplan on Tuesday, saying that both parties agreed for the Duke of York to pay an undisclosed amount to her, along with a donation to a charity “in support of victims’ rights”.

The lawsuit alleged Prince Andrew sexually abused Ms Giuffre as a teenager on multiple occasions in London, Manhattan, and the US Virgin Islands in 2001 – allegations that he strongly denied – when she was a victim of sex trafficking by the late financier Jeffrey Epstein.

News of the settlement comes weeks after the royal’s legal team lost a bid to dismiss the case on the grounds that another 2009 agreement between Ms Giuffre and Epstein barred him from liability.

While the price tag on the settlement has not been released, questions are mounting about how Prince Andrew will be able to afford it.

“She has accomplished what no one else could: getting Prince Andrew to stop his nonsense and side with sexual abuse victims. We salute Virginia’s stunning courage.”

Buckingham Palace declined to comment on Prince Andrew’s settlement when reached by The Independent on Tuesday afternoon.

It comes weeks after the Queen sought to distance herself from her rumored favorite son by stripping him of his HRH style and military roles last month.

‘Missing’ photo of Giuffre and Andrew

One of the key pieces of evidence in Ms Giuffre’s lawsuit against Prince Andrew was a photo purportedly showing the pair at a party, which she claimed was taken on the night he assaulted her in London in 2001.

The photo was crucial because it appeared to refute the royal’s claim that he never met Ms Giuffre.

Just hours before the settlement was announced, however, a source close to Ms Giuffre’s legal team claimed that she no longer had the image in her possession.

The revelation came to light after Prince Andrew’s lawyers requested access to the photo, which they hoped to examine to prove it was not authentic.

Failed bids to throw out the suit

Prince Andrew’s legal team made numerous attempts to have Ms Giuffre’s lawsuit against him thrown out based on an array of different arguments.

Late last year, the lawyers unsuccessfully contested that Ms Giuffre did not have the grounds to file it in US court because she lives in Australia, despite the suit suggesting she lives in America.

Then, the duke’s legal team made the argument that he was shielded from liability by a 2009 settlement between Ms Giuffre and Jeffrey Epstein, whom she accused of sex trafficking her as a teen.

That agreement was made public on 3 January 2022, revealing Ms Giuffre was paid $500,000 (£370,000) to settle all claims against Epstein and his associates, providing a release for “any other person or entity who could have been included as a potential defendant” against her allegations.

The duke’s lawyers argued that he was included as a “potential defendant”, but Judge Lewis Kaplan disagreed and ruled that the case could move forward on 12 January.

What did Giuffre’s suit allege?

Virginia Giuffre, also known as Virginia Roberts, first met now-convicted Ghislaine Maxwell in 2000 at the age of 17, when she was working as a spa assistant in Donald Trump’s Mar-a-Lago Club, where Ms Giuffre’s father also worked as a maintenance manager.

Maxwell approached her and asked if she was interested in being a masseuse for Epstein. However, according to Ms Giuffre’s claims, both Epstein and Maxwell began grooming her.

Ms Giuffre was allegedly trafficked to then 41-year-old Prince Andrew in 2001. Her lawsuit accused the royal of having sex with her on three occasions; a trip to London in 2001 when she was 17 for which she was paid $15.00 and later in New York and on Little Saint James, a small private island in the US Virgin Islands.

Despite flight logs and photos revealing that Ms Giuffre and Prince Andrew had spent time together, the duke has denied meeting or having sex with her. Most famously, in a 2019 BBC Newsnight interview with Emily Maitlis, he said he was having dinner in a branch of Pizza Express in Woking and not having sex in London as per the claims against him.

Ms Giuffre’s lawsuit claimed he had sex with her without consent despite knowing how old she was and that she was a victim of sex trafficking. It alleged that she has continued to suffer “significant emotional and psychological distress” decades after the alleged assaults.

“Twenty years ago Prince Andrew’s wealth, power, position, and connections enabled him to abuse a frightened, vulnerable child with no one there to protect her. It is long past the time for him to be held to account,” the suit stated.

While Prince Andrew’s legal team has not yet commented publicly on the settlement, the statement from Ms Giuffre’s attorneys included a brief section attributed to him.

“Prince Andrew has never intended to malign Ms Giuffre’s character, and he accepts that she has suffered both as an established victim of abuse and as a result of unfair public attacks,” it reads.

“It is known that Jeffrey Epstein trafficked countless young girls over many years. Prince Andrew regrets his association of him with Epstein, and comments the bravery of Ms Giuffre and other survivors in standing up for themselves and others.

Below is Ms Giuffre’s attorneys’ full statement announcing the settlement:

What we know so far

Virginia Roberts Giuffre’s legal team informed the US District Court that a settlement had been reached in a filing on Tuesday.

The terms of the agreement have not been disclosed.