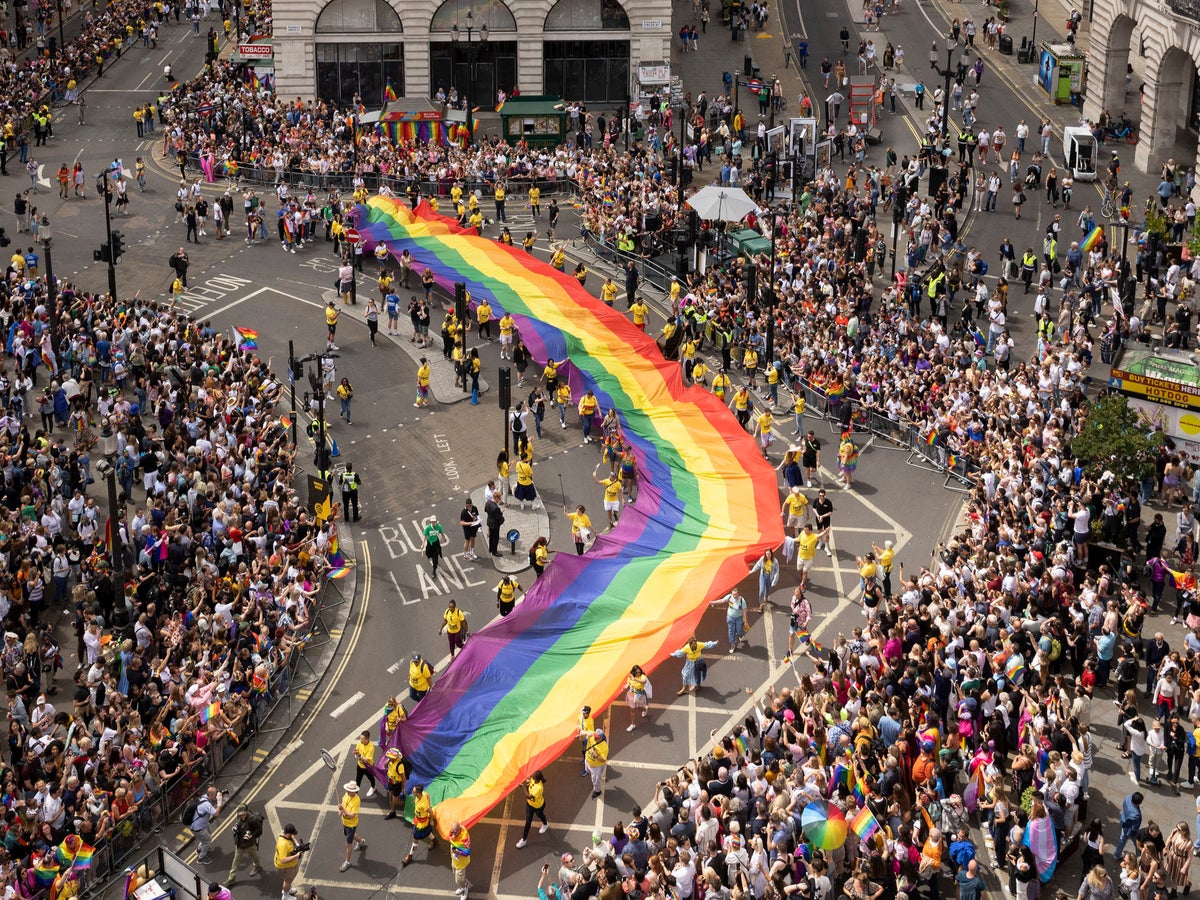 Olympian Dame Kelly Holmes and singer Emeli Sandé are among those attending the 50th anniversary of the UK’s first Pride parade.

Pride in London returned to the capital for the first time since 2019, celebrating 50 years since the very first march took place in 1972.

More than one million people attended the parade which began at 12pm today.

Those marching today will call on the UK government to ban conversion therapy for all LGBT+ people, reform the Gender Recognition Act, and provide equal protection for LGBT+ communities against hate crime.

They also campaigned for an end to “hostile environment towards minority migrants”, and for the establishment of a national Aids memorial to remember those who died during the HIV and Aids epidemic.

The Independent is the official publishing partner of Pride in London 2022.

What do all the letters in LGBTQIA+ stand for?

Every June, members of the LGBT+ community celebrate Pride month in honor of the 1969 Stonewall uprising.

Typically, the month-long celebration is marked with parades and other celebrations, which attract millions of people in support of the LGBT community annually.

As awareness around the LGBT community has grown, so have the words used to describe different sexualities – with the language surrounding the spectrum of sexuality constantly evolving.

In recent years, the queer community has most commonly been referred to as the LGBT or LGBTQ community.

The acronym is also seen with a + sign at the end, which has its own significance.

Uniformed Met Police officers not at the march

Uniformed Met Police officers were not at the Pride march, a decision made after LGBTQ campaigners raised concerns about their confidence in policing.

In particular, they took issue with the quality of the police force’s investigation into murders carried out by serial killer Stephen Port. In 2016, Port was sentenced to life in prison without parole for the murders of four young gay men whom he met online. Members of the police force were able to join Saturday’s march of their own accord. “I think the police have been sensitive to the issues raised by the community,” Major Sadiq Khan said. “And there will be uniformed officers in and around Pride to make sure we’re all safe, to make sure this parade is a success.”

Olympian Dame Kelly Holmes and singer Emeli Sande are among those attending the 50th anniversary of the UK’s first Pride parade.

Sande, who is among those on the entertainment bill, posted a story on her Instagram which showed her and her partner, classical pianist Yoana Karemova, on their way to soundcheck, and later in Trafalgar Square, where preparations were under way for the day’s musical extravagance.

See also  Tudanca will agree "with everyone, except Vox"

Sande previously said she was driven to come out publicly by an urge to be “bold and honest” in everything she does, and that while she had been “nervous” about the decision, she also wanted to “shout from the rooftops and celebrate” their relationship.

Dame Kelly posted an image of herself online wearing a long multicolored outfit featuring a Pride flag with the hashtag “being me” – a nod to an ITV documentary she appeared in to tell her story.

Australian drag queen Courtney Act, who competed on the sixth season of RuPaul’s Drag Race, is at Pride in London today.

Unable to contain their excitement, fans took to Twitter to document seeing the drag star on the Trafalgar Stage.

A group of people who marched in the first Pride in London in 1972 have marched once again today.

The protesters held up placards that read: “I was there in 1972. Still fighting for global LGBT+ freedom.”

ITV presenters Alison Hammon and Philip Schofield are showing their support for LGBT+ communities as they attend Pride in London.

Schofield, 60, came out as gay in 2020. Prior to coming out, he had been married to his wife Stephanie Lowe for 27 years, with whom he shares two adult daughters.

He posted more photographs from the parade on his Instagram Stories, including one with his ITV team. He wrote: “Happy Pride gorgeous team.”

The stars of heart stopper were seen dancing and giving the middle finger to homophobic protesters at the Pride in London march.

In a clip that went viral on social media, the parade was seen coming into contact with homophobic protesters.

My colleague Elizabeth Lewis have the full story:

Some of The Independent’s team who are marching at Pride in London have met with Keir Starmer and Angela Rayner.

See the friendly meeting below:

The best outfits at Pride in London 2022

Pride in London always brings the goods when it comes to LGBT+ fashion.

This year, as the parade returns in full force for the first time since the pandemic, attendees have gone all out with their multi-coloured, expressive outfits.

We round up just some of the best Pride outfits and costumes we’ve seen so far: