Skip to content
Home News Premiere of the new season “Go! Azen 8.0” on November 19, on ETB1 and eitb.eus

“Go! Azen” kicks off its seventh season as a successful transmedia phenomenon among the youngest and will bring new adventures for its protagonists in Basakabi.

In this new season, for the first time in the history of the series, an actor from Iparralde (Joanes Echeveste) will be one of the protagonists. In addition, also for the first time, it will arrive in Basakabi a character with hearing impairment, Iraia, who will appear with her brother Unax in the series.

We will also see how it will develop the relationship between Enara and Zuri, It will go on in a way they didn’t expect. Secondly, Luken y Garazi They will have the opportunity to give that kiss that was pending last season, but it will be much more difficult than they thought. What’s more, Maddi will start the summer with a new challenge: He wants to compose a song to enter the Maketa Lehiaketa contest in Gaztea and thus show his parents his true vocation for music.

During this new season we will also have the opportunity to enjoy versions of well-known songs from Basque music: themes by Berri Txarrak, Izaro, ETS, Nogen, Olatz Salvador, Hertzainak, Ruper Ordorika, Alaitz and Maider, Merina Girls, Bulego, Ezpalak, Esti Markez and Gatibu. As well as a song written and composed by the actress Dánae Riaño.

In addition, Young will restart the initiative in which the journalist Ainhoa ​​Urretabizkaia will offer micro pieces to publicize the original versions of the songs that we will hear in the series. These pieces will be broadcast on the web, in the app, on YouTube and on ETB3.

Coinciding with the television premiere of the new season of the series, the EITBPodkast platform will offer four audiobooks created by the writer Jasone Osoro about the universe “Go! azen” narrated by the main actors of the series. Audiobooks are now available: We have arrived! narrated by Lorea Intxausti; Maddi’s grandmother’s flu, with the voice of Dánae Riaño; Eider’s diary, narrated by Esti Lopez; and Skiing for a weekend with Asier Burgete.

“Go! Azen” has reached its seventh season achieving great success among the youngest and has become a transmedia phenomenon that goes beyond television screens. In the app Let’s go (available for iOS and Android), for example, we can witness what the characters in their Goatsapp group say or see the photos and videos they share, we can learn the lyrics and choreographies of the songs, and enjoy with a lot of extra content.

Likewise, we can follow all the news of the series and its interpreters in the social networks Instagram, Facebook and Tik Tok, and the episodes of the series can also be seen through the EITB YouTube channel.

Around the series, we can find on the market several discos, books of the writer Jasone Osoro, the magazine Go! azen, t-shirts, canteens, towels, notebooks… All these products are available in the store on linot by EITB.

Presentation of the season in Iruñea 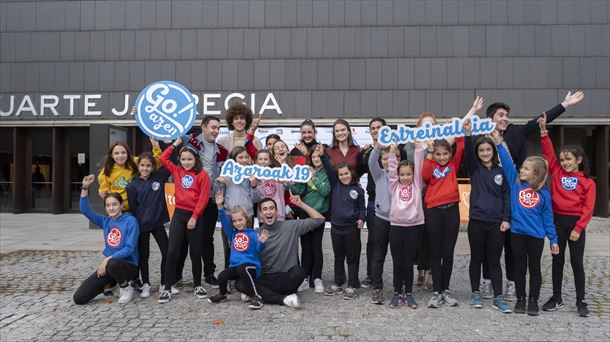 Presentation of the season in Iruñea.

China sinkholes: Why country is host to some of the world’s most dramatic craters