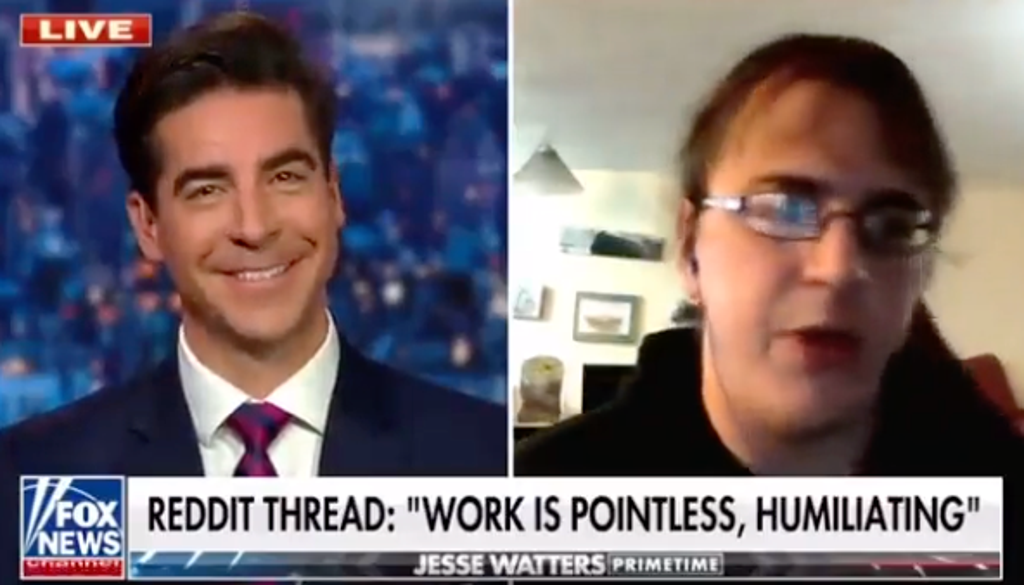 A wildly popular subreddit called r/antiwork, where users discussed ways to reform exploitative labor systems and commiserated over pandemic working conditions, has suddenly gone private after a testy interview between Fox News anchor Jesse Watters and one of the forum’s moderators.

r/antiwork has been around since 2013, but has seen a rocket-ship rise to popularity during the strains of the pandemic. The community, whose slogan is “Unemployment for all, not just the rich!” has more than 1.7 million users, and was the fastest-growing non-default reddit across the site as of 26 January.

The group was so popular Fox News sought to interview one of its moderators, Doreen Ford.

In their conversation, Mr Watters appears openly contemptuous of the whole idea, laughing out loud when Ms Ford said she’s a dog walker who works about 25 hours a week and aspires to teach philosophy.

“I would love to take your class,” the Fox anchor said, adding, “Not everything is free, but it is a free country,” as part of a segment titled “The War Against Working.”

“There are some misconceptions about the movement,” Ford told Watters. “We want to still put in effort. We want to put in labor, but we don’t want to necessarily be in a position where we feel trapped.

“I think laziness is a virtue in a society where people constantly want you to be productive 24/7.

After the interview the r/antiwork subreddit went private with a message reading: “We’re closed while we deal with the cleanup from ongoing brigading, and will be back soon. (You don’t need to request to join. We’ll be back real soon. I promise.)”

Brigading refers to a coordinated effort from one group to disrupt another’s work on the site.

In an archived postanother person identifying themselves as an r/antiwork wrote that, “We’re under heavy fire by brigaders – “new” users that never participated in /r/antiwork,” adding that these “bad actors” showed why “we will outright decline right-wing media like Fox News from now on.”

A Reddit user named Luciagrace posted earlier in the day that, “Came on there this morning and it looks like a dumpster fire of locked posts and comments. Apparently people are getting banned left, right and center for discussing the interview, why?”

The forum’s moderators have said they weren’t banning people for discussing the interview per se, but rather for breaking the forum’s pre-set rules.

Followers of the r/antiwork philosophy said they were worried at how the movement came off on TV. Instead of focusing on exploitative labor practices, and the outsized place most Americans’ jobs play in their lives in the absence of a functional social safety net, they believed the forum came off looking like an expression of Millennial privilege.

“Most of the posts on r/antiwork are from retail and fast food workers, nurses, teachers, and other essential workers who are being screwed over during the pandemic,” wrote one user on Twitter. “But then this walking stereotype goes on TV and sets the entire thing back by a decade.”

Doreen Ford has previously explained the deeper meaning of the forum in other media outlets.

“The point of the movement is not to tell everyone to go quit your job immediately and don’t think about the economic impact on yourself or your family — that’s definitely not the message,” she told Bloomberg last month. “The central aim of our mission is to undermine and subvert capitalism as much as possible and make it so that people don’t have to rely on their jobs as much to pay rent.”